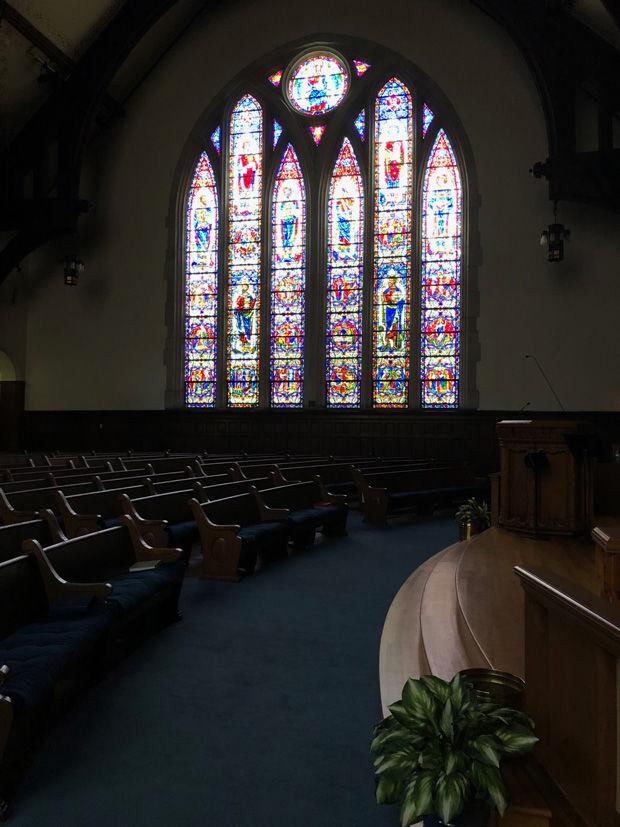 Ladue High School senior Anya Tullman visted the Presbyterian Church of Evanston in Illinois for an assignment. While she was there, Anya was welcomed into their community and learned more about their effort to aid immigrants and refugees.

Over the summer, I attended the Medill-Northwestern Journalism Institute, a five-week-long intensive program for high school seniors located at Northwestern University in Evanston, Ill. Finally, I found myself fully immersed in the world of journalism. Lectures and writing labs nine hours a day expanded upon my knowledge of print, broadcast and audio mediums. At this program, I wrote a story that made me reconsider what it means to not only be a journalist, but a Jewish one.

Since the age of 10, I had attended a girls-only summer camp in Massachusetts. The majority of campers were white, Jewish and from the tri-state area, just like I was (I moved to St. Louis from New York after that summer). However, at Medill, program participants were diverse in thought, culture and even nationality. The 84 participants  hailed from 22 states as well as China, South Korea, Vietnam and Qatar. I was the only cherub – as students in this program are affectionately known — from Missouri, and learning about my new friends’ newspapers, editing processes and struggles with peer review was eye-opening.

Each day of the program brought a new assignment. I wrote about Evanstonians’ opinions on arming teachers. I discovered and interviewed 15 people about a trend of high school girls becoming politically active. I followed a panhandler for an afternoon and put my observations into words on paper. And, I wrote about local churches that changed my life.

During the third week, our instructors gave us an assignment: write a feature story about anything in Evanston. The ambiguity of the assignment scared me, and I spent the rest of the day walking around town, hoping to somehow stumble onto a story. It wasn’t until I turned left onto Church Street that I knew I had something.

Until this point, churches had been a mystery to me. In fact, other than a brief unit in eighth grade social studies, I knew little about the Christian religion. I grew up in a Jewish household, and most of my close friends are Jewish as well. I can still recite my bat mitzvah Torah portion from memory, and, in my opinion, there is no better taste than challah dipped in grape juice. But, from my position at an Evanston intersection, I could see at least one church in each direction, and decided to remove my Jewish hat in favor of a reporter’s notebook.

Although my story lacked any sort of angle or direction, I took a deep breath and walked into the First Presbyterian Church of Evanston. A member of the clergy gave me a tour of the chapel and said that the congregation was celebrating its 150th anniversary this year. The church’s hallways were lined with photos from its 125th anniversary, and I noticed that nearly everyone photographed was white. My tour guide proudly explained that, in the last 25 years, the church had increased its non-white population to almost 40 percent of its congregants.

I was introduced to the senior pastor, a Jamaican-American man named Raymond Hylton. Hylton told me about the church’s efforts to welcome refugee families and help them assimilate to American life through an organization called “First Friends.” This reminded me of the efforts my temple, Congregation Shaare Emeth, made to assist new Americans through its partnership with the International Institute of St. Louis.

“These people have come here under great duress,” Hylton told me. “You’d be looking for somebody to make you feel safe.”

I spent the rest of the day speaking with the clergy members at nearly every church in walking distance, including Methodist and Lutheran places of worship. Many told me about their communal efforts to ease refugees’ transitions, including one pastor whose congregation makes 130 quilts annually for refugee families. At the end of every interview, the clergy members told me that I was always welcome into their community.

Later that evening, as I sat down to transcribe my interviews, I felt overwhelmed by the kindness Pastor Hylton and so many others had shown me, a complete stranger of a completely different faith. While religion has long been a divider, the experience reminded me that it can also unite people to work towards a greater good. Although a journalist’s job is primarily to inform, we are also called upon to aid those searching for a place to belong. I hope that, through my journalism pursuits, I can do just that.