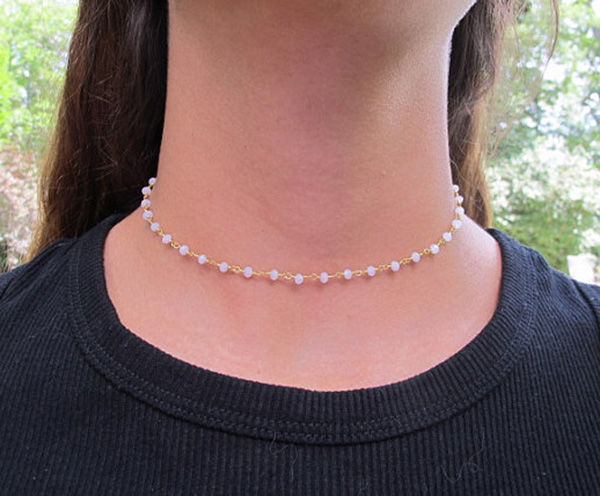 In today’s day and age, it seems like anything is possible for young entrepreneurs, what with the entire internet at their fingertips. Social media, especially, has been a revolutionary force for those looking to market their businesses. And a little self-advertising also can be effective.

All of those ingredients have helped Jewish teens – and twins – Allie and Lindsay Schneider, seniors at Ladue Horton Watkins High School, make their jewelry business a success.

The young entrepreneurs got started making TwiNecklaces in the summer of 2015.

“One of our friends was wearing a necklace that we really liked, so we looked for it online but had no luck,” Allie said. “Later that day, Lindsay came up with the idea of making our own replica of the necklace.”

The idea got off to a good start as the twins purchased supplies on Etsy, an internet handcrafted-product site, and then began learning how to make similar necklaces.

“We taught ourselves how to make the jewelry,” Allie said. “Trial and error took up a lot of the process. But if we had questions, an online video always had the answer.”

Allie and Lindsay began wearing the necklaces at school, and friends began asking them whether they could purchase them. Requests were overwhelming, so to deal with the response, they opened up an Etsy shop. At first, sales weren’t really rolling in. But they had another idea.

“One day, Allie asked me if I’d be willing to (model them),” said Isabella Carr, a classmate of the twins. “She needed someone to take pictures with them. The fact that she said I could have necklaces free of charge was a huge plus.”

Allie and Lindsay decided to open an Instagram account featuring the necklaces in order to boost their popularity, because some people might be unfamiliar or less inclined to use Etsy. After gaining a following on Instagram, their Etsy account took off, and sales increased in addition to those  they were already making to friends and family.

But it’s not just the social media outreach that has caused the popularity boom. The necklaces are the biggest selling point.

“We offer a lot of variety,” Allie said. “We use velvet, rosary beads, seed beads and faux suede to design a variety of pieces.”

Isabella said, “The styles featured on the Instagram page and website are all very in right now. I think that the selection is really versatile in terms of what you can match them with. They are easy to dress up or down and just add a nice flair to whatever you’re wearing.”

Allie and Lindsay have capitalized on the necklaces’ marketability by using them to help people.

“[Recently], we donated 70 necklaces to the Ladue (high school) Dance Marathon for Children’s Miracle Network,” Allie said. “All proceeds will go toward helping those facing pediatric illness and injury.”

Another classmate, Shirley Gelman, one of the executive directors of the Ladue Dance Marathon, was extremely appreciative of the twins’ efforts to make a difference.

“Julia Biest, the other executive director, is actually really good friends with Allie,” Shirley said. “She asked her if she would donate a few for the raffle. It was then Allie’s idea to donate a bunch and let us sell them at school.”

The dance marathon raised more than $44,000. The  necklaces helped, raising $750 while being sold at a discounted price.

“Not only did it raise a lot of money for us, it also raised a lot of awareness,” Shirley said. “You would go around school and see everyone wearing their chokers (the specific necklaces donated to the event) and you would know they were from the dance marathon.”

Although Lindsay and Allie would love to continue their business in college, it may be difficult.

“We’re not sure how well we’ll be able to balance both TwiNecklaces and college,” Lindsay said. “We might keep selling them to small groups of people.”

But even though it may be difficult to continue, they are definitely happy to have started the business.

“My favorite part of the business is definitely designing jewelry with my sister for ourselves to wear,” Allie said. “It’s so much fun wearing our creations out and seeing what our friends think of them.”