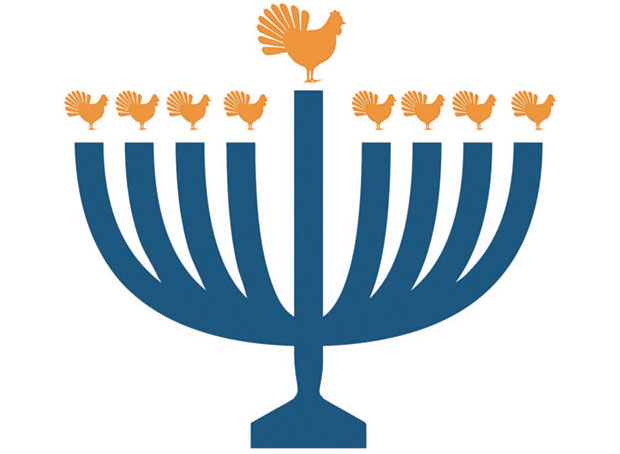 Cornucopias overflowing with dreidels? Turkey stuffed with gelt? Sweet potato latke pie? This year brings a rare coincidence of holidays. For the first time since the late 1880s, Thanksgiving and the first day of Hanukkah will occur on the same day. As Nov. 28 quickly approaches, wild and wacky combinations of these two celebrations and modern spins on old traditions are emerging all around the country to commemorate this festive event. Why such a fuss over the convergence of these two holidays? “Thanksgivukkah,” as many are calling it, will not occur again in our lifetime.

Many entrepreneurs are taking advantage of this extraordinary occurrence to help those in need. A 9-year-old boy in New York, Asher Weintraub, invented the “Menurkey” which is a menorah shaped to resemble a turkey. By selling ceramic and plaster Menurkeys, Asher has raised more than $48,000 for charity.

Similarly, Dana Gitell of Boston is featuring a new line of Thanksgivukkah items to commemorate the unique intertwining of these holidays. She sells T-shirts holiday cards, fragrances, and soaps among other Thanksgivukkah themed items. Gitell donates a percentage of her sales to MAZON/A Jewish Response to Hunger, which is an organization that helps fight hunger across Israel and America.

The recognition of this once-in-a-lifetime holiday overlap has also extended to unusual food mash-ups. The buffet items to watch for this year at Thanksgiving-Hanukkah dinners include Manischewitz-brined turkey, pumpkin rugelach, challah stuffing, and latkes with cranberry sauce. Synagogues such as Temple Beth Sholom in Santa Ana, Calif. have been offering Thanksgivukkah cooking classes during October and adding extra classes due to the overwhelming response.

Jewish day schools across America are recognizing the spirit of Thanksgivukkah in creative and entertaining ways. St. Louis native Rabbi David Paskin, Head of Kehillah Schechter Academy in Norwood, Mass., wrote “The Ballad of Thanksgivukkah,” which has gone viral on YouTube. Its spirited and humorous lyrics include “imagine Judah Maccabee sitting down to roast turkey, passing the potatoes to Squanto, and Pilgrims in Jerusalem standing with Hasmoneans. Got to get this temple cleaned up pronto.”

Rabbi Paskin viewed a close connection between the Thanksgivukkah holiday with the holiday of Sukkot. He opined that all three holidays celebrate overcoming religious oppression and being thankful for our freedom and God’s miracles.

“The trifecta of Sukkot, Hanukkah, and Thanksgiving all connect the common value of being thankful. Sukkot is the time of harvest when we all recognize how lucky we are to have a world full of blessings,” Paskin said.

Paskin noted that the teachers in his school would be incorporating the messages of these three holidays into their curriculum. Since his Jewish day school is the closest to Plymouth Rock, Paskin felt it important to seize the opportunity to connect the Jewish and secular calendars.

“[Thanksgiving brings] a common theme of thankfulness where we are able to look at the world and not take things for granted,” Paskin said. “This year, we have a day to mark that and be thankful for that, not just in a secular way and not just in a religious way but to be thankful for both.”

What do local religious leaders in St. Louis have to say about the convergence of these two holidays? Rabbi Susan Talve of Central Reform Congregation remarked on the significance of these holidays as a reminder that we must strive to maintain our Jewish identity in relation to the broader culture.

“The confluence of Hanukkah and Thanksgiving this year gives us a wonderful opportunity to reflect on our American-Jewish experience,” Talve said.  “One of the most important lessons of the Hanukkah story is an internal one about the clash of the values of Judaism and Hellenism. We had to decide how much of the culture of Hellenism we could assimilate and still remain true to the core of Judaism.”

When people sit down to dinner on Thanksgiving and light the menorah, they should celebrate the American ideals of religious liberty and free choice. Thanksgivukkah inspires valuable lessons for people of all religions wrestling with challenges of being true to their particular faith, while also cultivating connections and relationships with people of other religions.

“We will celebrate the fight for religious freedom gained by the Maccabees and the Pilgrims, but we must also remember that maintaining our identity as a minority is what truly makes America great,” Talve said.

As this unique experience of celebrating the festival of lights while simultaneously enjoying a scrumptious Thanksgiving feast approaches, remember to be thankful for religious freedom and wish family and friends a hearty “Gobble Tov!”