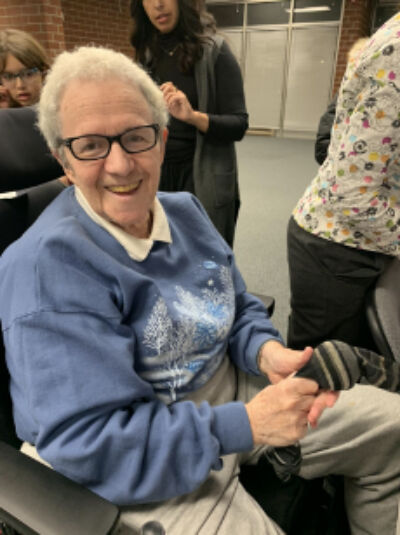 Shulamit Bastacky, who now lives in Pittsburgh, has a tremendous story of surviving the Holocaust. She connected with Ohr Chadash teen writer Avital Vorobeychik through a program called CHAT, which stands for Corona Halts At Talk, and allows kids and the elderly to talk on the phone every week.

Around the time when COVID first broke out in March, I joined a program called CHAT. For as long as I can remember, I have always wanted to volunteer at a senior citizen’s home, but I never met the age requirement.

One day, I was scrolling through an online group that I’m a part of and noticed a link with a description that interested me. The description explained how to help at a senior citizen home virtually. Intrigued, I clicked on the link and read about the program.

I emailed someone and met an extremely kind woman named Samantha Walter. She gave me all the information I needed along with a phone number of a senior that I would call to check on. I was so delighted when I found out that the senior I would be speaking to was a survivor of the Holocaust. Her name is Shulamit Bastacky, and I loved the opportunity of getting to talk with her. Usually, we speak once a week for at least 15 minutes.

Bastacky’s survivor story begins a few weeks after her birth, when the Nazis invaded her home town in Lithuania.

Thankfully, as an infant, she did not have to endure the pain of concentration or labor camps during her time in Europe.

“My life was saved by a Polish Catholic nun who took me to a basement cellar. My parents were in local labor camps, not concentration camps,” said Bastacky.

Despite being saved, her life still wasn’t good. In the basement where baby Bastacky was hiding, there were many other people, making it crowded and tough to live in. That said, it wasn’t as bad as the alternative.

“I was in the basement cellar until the end of summer of 1944 because that’s when the Soviet army liberated the area,” said Bastacky.

After the war, the Polish nun who saved Bastacky’s life took her to a man who brought her to an orphanage. For more than three years her parents searched for her, but it was a struggle because her name had been changed and she was no longer a baby. They didn’t know what she looked like.

Given the circumstances, finding Bastacky seemed impossible but then something remarkable happened: Bastacky’s father remembered she had a birthmark. If it weren’t for Bastacky’s birthmark, she may never have been reunited with her family.

Even though we don’t realize it, even the smallest thing can change someone’s life, just like it changed Bastacky’s. When she was reunited with her family, she was still only about 4 years old.

During her time in hiding, Bastacky was deprived of many experiences that we take for granted. “In the orphanage, I was scared of lots of sounds because I was deprived of hearing anything [outside of the basement] in the first few years of my life,” said Bastacky.

She was also in very bad shape due to lack of sunlight and being in such a confined living space.

“I had to undergo rehab, which was provided by American Jewish organizations,” said Bastacky.

Now residing in Pittsburgh, Pa., Bastacky has one younger brother and never married. Despite the obstacles in her childhood, she has still made a huge impact in the world.

She now visits schools and collects teddy bears so that no child has to struggle like she did, through a frightening time with no one and nothing to hold close. She usually donates these teddy bears to children with troubled childhoods and residents of local women’s shelters.

Bastacky took her traumatic past and turned it into a way of helping kids around the world who have no one to care for them. I hope others are able to meet someone like Shulamit Bastacky and have the privilege to share a relationship like I have with her. If you would like to apply for CHAT and find someone special to talk to, go to https://www.giftpgh.org/chat.