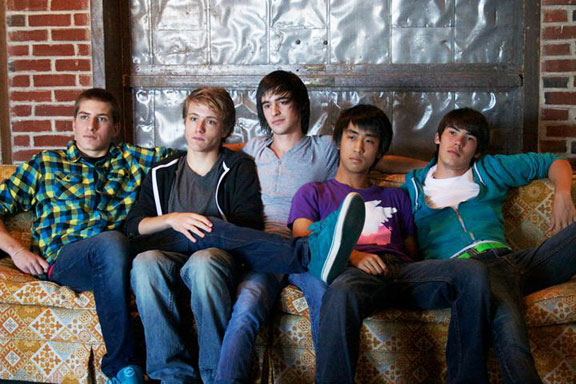 Adam and Henry, both raised in Jewish households, attend Clayton High School along with Mike, while Ian and Colman go to John Burroughs School, and Will attends Marquette High School. Balancing high school along with being in an up-and-coming band is a big responsibility, but the teens still find time to play shows at local venues many nights throughout the year.

Pinkleef’s members were 15 when the band released its debut album, “Ellipsis” on iTunes in March, 2009. “Ellipsis” was co-written by Ian and Adam, and the six-track album sells for $10. The group started off with a traditional approach to gaining publicity, but recently decided to take things into their own hands.

“We hang posters in the Loop and just around different places. We have giveaways and Facebook statuses, but most publicity is through word of mouth,” said Adam “We were paying a manager to handle that kind of stuff but it cost too much to have someone do what we could be doing ourselves.” Members’ loyalty and interaction with its fan base sets Pinkleef apart from other high school bands. As more people are exposed to the band’s music and attendance at their performances continues to rise, none of the band’s fans go unnoticed. A friend to the band and an avid fan, Clayton High School freshman Nate Stuhl speaks highly of the group.

“Pinkleef is far more talented and dedicated to what they do than any local, or high school band… that I’ve ever encountered,” Nate said.

Pinkleef’s appreciation of its fans extends into its music. One of the songs on its upcoming album, “Chestbump Taylor,” is a valentine to an enthusiastic fan. Pinkleef recorded its second album, “Chasing Doubt,” in December, which is set for release Feb. 12 with a party and performance at Cicero’s Bar & Grill in the Delmar Loop. The band is also planning to go on tour this summer.

“[The tour] is going to be three weeks in August and a week in June. We’re working on getting attention from labels to help out with the tour,” Henry said. “And we’re going to be on a Hot Topic tour; there are 13 in Kansas City and St. Louis, and for those shows we pretty much just call and talk to them and they let us play.”

Today, Pinkleef is in a stable and successful place. However, things weren’t always so painless. Not long ago, the founder of the band, Adam, spent 14 months in a rehabilitation facility, but has since worked to make up for lost time.

“I had self-esteem issues and I dealt with them in a really negative way. I would look up to other artists, like one of the members of the Red Hot Chili Peppers who was addicted to heroin, and I just thought that if I did that too, it would make me a better musician,” Adam said.

Since his return from rehab, Adam has focused on the more positive things in his life. He says that music helps get him through each day. The person who returned home is very different than the boy who left 14 months before.

“Right after I got back we had a show scheduled, and we just started practicing eight hours a day to catch up on all the time we missed,” Adam recalled. “I thought it would be a slow transition back into normality, but I just wanted to forget about rehab and enjoy living, so I just completely moved on and drugs aren’t a part of who I am anymore.”

While the band plans to stay together through the end of high school, members will take different paths after their graduation in 2012. Ian and Colman plan on attending college, while the rest of the band has a more music-driven state of mind.

“I might take five or so years off and go back to school for musical engineering,” said Henry. “My parents want me to go to college after high school but they aren’t going to force me.”

It’s rare to see a band comprised of high school students have such confidence and faith in themselves and in their music, but it’s this strength that the boys hope will catapult them further into the music industry, and hopefully lead to success.