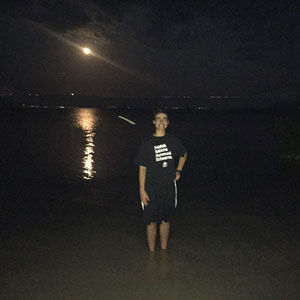 Studying abroad is becoming increasingly popular among high school teens in America. While this experience allows students to learn about a different culture as they go to school elsewhere, it also means living thousands of miles from home for months at a time. That alone can be enough to push them out of their comfort zone.

Three high school students from St. Louis took a leap of faith and lived abroad in Israel during the school years of 2017, 2018 and 2019. For four months each, Jewish St. Louisans Levi Rose, Nina Sachs and Jordan Blucher, went to school in Israel and explored different cities throughout the country.

“My friend had brought it up to me the summer before and in the moment it sounded like a cool idea,” Blucher said. “We continued with the process to get in and then it slowly became something I wanted to do and it’s a cool experience.”

Rose, a senior at Whitfield School and member of B’nai Amoona, went on a trip called Tichon Ramah Yerushalayim (TRY), a trip associated with Camp Ramah. Rose, who has family from Israel and has been there several times, still found shocks and surprises while living there.

“…[Israel] is very different from America,” Rose said. “It is interesting to be a [religious] minority in America and then go to a place where you’re not and be a part of the community, which is something you can’t feel anywhere else.”

Sachs, a senior at Ladue and member of Shaare Emeth, did not know anyone going on her URJ Heller High Abroad trip, but that didn’t stop her from accomplishing her dream to go to Israel. She connected with fellow students right away.

“As soon as we met in the airport, I had made 27 new friends. Everyone was very nice and welcoming,” Sachs said. “I think knowing that we were going to be living together for so long made everyone click instantly.”

Blucher’s day-to-day schedule varied, but just like students in America, she woke up early and went to school. She also had field trip days, when she got up between 5:30 and 8 a.m. and spent the whole day somewhere new.

“The general schedule was if we didn’t have a field trip, we would have Israeli studies and core classes – what you would take at school normally,” Blucher said. “…It is more like a college schedule where you’re in and out of the classroom. On days we had field trips, you usually wake up earlier and it would last a lot longer. But the whole day is traveling around to some part of Israel and you learn about the history and that section of where your learning.”

Rose’s highlights included some once-in-a-lifetime experiences, only possible to do in Israel. Some included big holidays and special events.

“We were in Israel for Israel winning the Eurovision,” Rose said, referring to the annual international song competition, with participants representing countries from primarily Europe. “Yom Ha’atzmaut was a lot of fun. We went to Ben Yehuda Street for that. We went to a Yom Yerushalayim concert where a bunch of seniors came and performed.”

Sachs said she would recommend the trip to anyone because of the impact it had on her.

“I would tell anyone to do this hands down,” Sachs said. “It was probably the best experience of my life. Everyone there is so welcoming and you meet a lot of people who you will forever be friends with.”