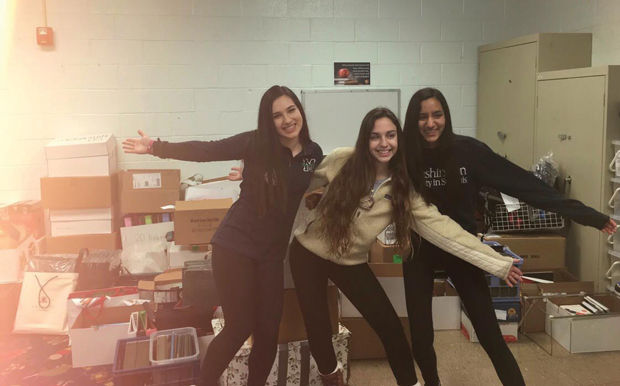 “Think globally, act locally” is the slogan of a new club at Marquette High School known as Make a Change. Three juniors at Marquette decided to begin this club because they were inspired by the United Nations’ Global Goals.

Romi Rubanovich, one of the organizers, explained that she based the club on her Jewish belief that it is incredibly important to incorporate tzedakah into everyone’s lives. She wanted to bring that concept into her school environment as well as make it the focal point of the club.

Make a Change was created to better the world. Many people feel too far removed from global issues to believe they can make a positive change in the world. Three examples of these issues are poverty, hunger and lack of quality education.

“I guess what really inspired me [were] the things I was passionate about,” co-founder Mahika Mushni said. “There [are] all [of] these awful things going on and, for a while, I got really caught up in how helpless I was. The issue with that type of thinking is that I was not helpless.”

Mahika said she has always been passionate about individual rights, including women’s rights and gay rights. Her awareness heightened after she started to become involved in social media, especially Twitter.

“I realized that by having discussions with people around me, it was possible to make a mark on something in the world,” she said. “That’s where the idea [for the club] really came from.”

Their first goal, education, inspired Romi and club members to plan a fundraiser to collect school supplies that could be donated. Their goal was to fill a car with school supplies, but they ended up filling a school bus full of markers, notebooks and other supplies.

“The first thing I really wanted to do with this group was [to] address education,” Romi said. “I firmly believe a world of potential is given to any child with an education. Unfortunately, not all children are given the equal opportunities to excel in their studies.”

Romi said she was ecstatic after seeing the outcome of the drive.

“Not everyone is as lucky as we are, even in a place so close to home,” Romi said. “Education is the key to ending the cycle of poverty. Knowledge is power.”

The children at Miles Davis Elementary School, the recipients of the school supplies, will not have to worry about bringing a pencil from home. Now, there are readily available supplies for them thanks to the public’s generosity.

“The school was very gracious and touched that students across the river were concerned about them,” club sponsor Mary Parish said. “This group makes me feel like students really can make the world a better place.”