From mourning to celebration 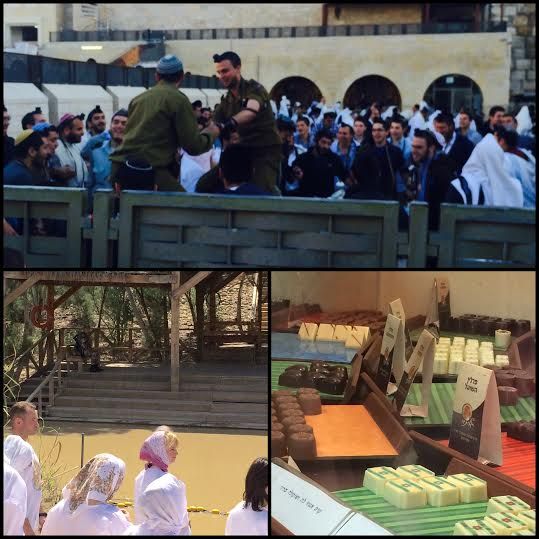 This past week in Israel was incredible. Almost as soon as we arrived back in Israel, it was Yom Hashoa, Holocaust Remembrance Day. My school had a program in the evening, we lit candles and read stories of survivors. The next day started off at 10 am with a siren throughout the whole country. The siren brings the country to a halt as the whole country stops their cars, and stands in silence to remember those that perished in the Holocaust. After that, we went on a tour of Har Hertzl. Har Hertzl is Israel’s main military cemetery. It is located on the northern slope of Mt. Herzl. It was established in 1948 when soldiers who fell in the Jerusalem area were buried here. In 1949, the government decided to turn the site into the main cemetery for IDF members who have fallen in the line of duty. We heard many stories about individual soldiers who were buried there.

It’s really heart breaking to see how young the soldiers were. The youngest I saw was 10 years old, but I saw many who died at the age of 18. The ones a bit older, are also heartbreaking, probably leaving wives and children at home. It was hard to see, but of the utmost importance. It is because of them, that now we have a country who can protect us, and can really make sure that the Holocaust never happens again. It was powerful to be there on Yom Hashoa.

The following week was so busy. Sunday morning I went to the western wall at sunrise. It was Rosh Chodesh, the beginning of the Jewish Month, many people were there praying, it was amazing to see.

The following day, we found out that Rav Aharon Lichtenstein had passed away. He was a huge and very influential Jewish Orthodox Rabbi. He was born in 1933 in France, he passed away here in Israel. He earned his rabbinic ordination at Yeshiva University and a PhD in English Literature at Harvard University. My school took us to his funeral. He was an amazing man. All the speeches were in Hebrew, but just being there was amazing. Thousands paid their respects to this great Rabbi who really helped to shape Modern Orthodoxy.

Tuesday night started with a siren once again, as it was the start of Yom Hazikaron, the Day of Remembrance for the Fallen Soldiers of Israel and Victims of Terrorism. The whole country once again came to a halt to remember those they have lost.

This day is much closer to the heart of our generation. Nearly every Israeli knows someone personally who fell in battle, or was hurt by terrorism. It’s a scary reality here, how every 18 year old goes to the army, and terrorism is not uncommon. We watched many interviews of parents, children and friends who lost their loved ones, every video makes you cry. Then one of my teachers spoke to us about his experience in the army, and about the friends he had lost who were protecting our country. There was not a dry eye in the room. The next day we walked the 3 miles to Har Hertzl. Everyone comes to Har Herrzl to pay their respects and honor those who fell protecting us on Yom Hazikaron. I stood with my roommate, at her friend’s brothers grave. He was a lone soldier, David Gordon, from Pittsburgh who died this summer in the war. Words cannot describe the pain, it was so sad, so heartbreaking. There was another siren in the morning at 11am. The army sends soldiers to every grave to make sure they have people there to honor them when the siren goes off. After that we went to visit many other graves, many that we had no connection with. There’s a new app on phones, called “נזכר את כולם,” if you take a picture of the grave, it will give you the story of the soldier that is buried there, so no one is forgotten. Later in the afternoon I went to the victims of terror, ceremony. Benjamin Netanyahu was there, which was cool to see. The ceremony itself was very meaningful.

The county goes from mourning to celebration, as Tuesday night turns into Yom Ha’aztmaut, Israel’s Independence Day! The whole county is celebrating! Ben Yehudah is filled with thousands of people, tons of live music and DJ’s. The next day is more of a family day, people have Barbecues and go on hikes. My school took us to Latrun, Israel Armored Corps Museum! Latrun, had a whole “carnival” set up, with many soldiers, kids could climb on the tanks, see many army tools, and get their faces painted like soldiers!

After that we walked from Latrun to Kibbutz Shaalvim, through the fields, along the highway! We waved our flags and sang songs, we caused a bit of traffic, as people slowed down to watch us, and honk their horns! It was a lot of fun!

After that we headed back to Jerusalem! Many of the museums were free or very cheap in honor of Yom ha’aztmaut. My friend and I decided to take advantage of this opportunity and go to the science center! As we walked in there was a mezuzah on the door that had gone to space, it was pretty cool. It was a nice place to see, more for kids but quite cool!

Later that evening we went out for dinner, and headed back to school!

Friday morning I went to the Jordan River, very close to where Joshua and the Jewish people crossed into Israel thousands of years ago. There were many people getting baptized while we were there. I thought it was quite fascinating, as we stood next to the Israeli soldiers, while the Jordanian soldiers stay on the other side of the river, which appeared to me to be about 10 feet away.

After that My friends and I went to a chocolate factory called Galita. I’m allergic to nuts, and I’ve found that Israel isn’t as careful with contamination, so I couldn’t get anything, but being there was cool!

For Shabbat I was in Tzfat, it’s so beautiful there. I didn’t have much time and didn’t get to visit the famous artist quarter, but just being there was beautiful.