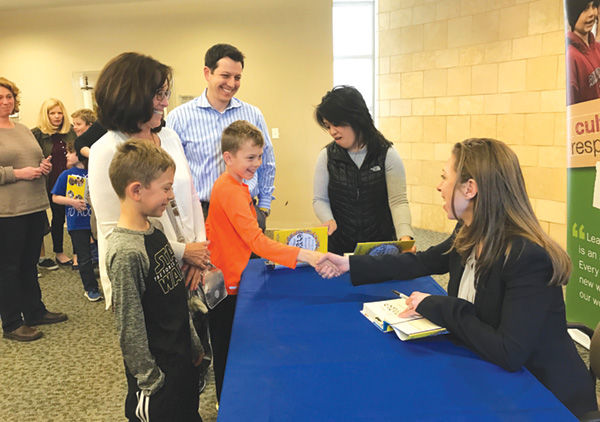 Chelsea Clinton spoke to students, faculty and families at Saul Mirowitz Jewish Community School on April 7 as part of a tour promoting the recent paperback release of her 2015 book about child activism, “It’s Your World: Get Informed, Get Inspired & Get Going!”

“It’s Your World” discusses many important but controversial topics such as gender equality and climate change in a dialect that is easily interpreted by students in third through eighth grade.

Aviva Kiernan, an eighth grader at Mirowitz, was given the honor of introducing Clinton to the school community with her friend Zoe Shacham.

“At first I was very nervous because I didn’t know how I was going to do,” Aviva said. “I worked really hard on the introduction the week before and I was really inspired when I first met [Clinton] because she was really encouraging and friendly.”

Naava Simckes, Aviva’s classmate, felt particularly inspired by Clinton’s call to action for all teenagers and children around the globe. This reminded Naava of tikkun olam, a Jewish concept constantly stressed at Mirowitz, which is defined by acts of kindness performed to repair society and the world.

“Something [Clinton] kept repeating is that we have the power to go out and make a difference, no matter how big or small your dream is,” Naava said. “In school we talk a lot about tikkun olam as a Jewish value, so part of what she spoke about was making change which really stood out to me.”

Andrea Newstead, a technology teacher at Mirowitz, attended the Clinton presentation along with many other faculty members. Although the book is intended for a middle school audience, she still found meaning in many of the lessons that Clinton’s book stresses.

“[Clinton] was so kind and down to earth,” Newstead said. “She took the time to talk to all of the kids that were getting their book signed, and the message she was sending was the perfect message to Mirowitz students who learn about this daily.”

As a 5-year old, Clinton heard that then-president Ronald Reagan planned to visit a cemetery in which Nazis were buried in while traveling to Germany. She felt very disturbed by this, and wrote a letter to his administration, asking that he not visit the cemetery during his trip.

When her father became president of the United States, the Clinton administration set up a program that ensured every child who wrote a letter to the current president would receive a personal response in a timely matter. This program continued under the Bush and Obama administrations, inspiring children around the country to express their opinions.

“Clinton also talked about traveling with her mom and seeing with her own eyes the lack of education that children were getting in underdeveloped countries,” Newstead said. “After that, she came back and wanted to make a difference.”

During her presentation, Clinton spoke well and with passion, according to Aviva and Naava. Her strong belief in stepping up to influence the world regardless of age seemed to have a lasting effect on Mirowitz children, family, and many others who were there.

“I would say [the children] loved Clinton and I hope that they feel empowered to do something to make a difference locally and even nationally,” Newstead said.