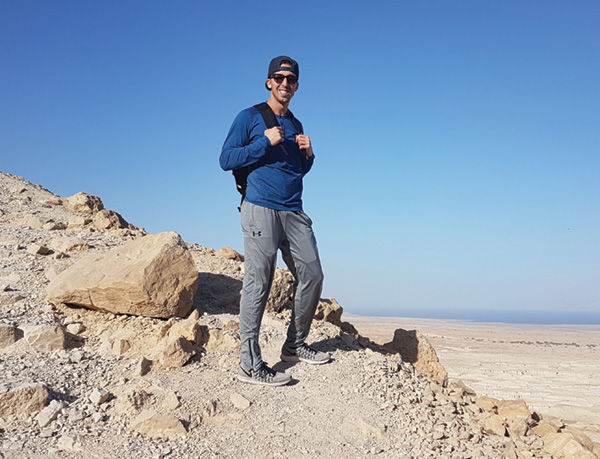 Here’s a St. Louis Cardinals player many fans likely haven’t heard of: pitcher Corey Baker. Although he has been with the organization since 2011, Baker has played exclusively for the Cards’ minor league teams, largely in Palm Beach, Fla.; Springfield, Mo. and last year, for a while in Memphis.

This year, however, Baker is one of 10 current and former Jewish major leaguers representing Israel as it prepares for the first round of the World Baseball Classic in Seoul, South Korea in March. He and the other players were in Israel this week visiting Tel Aviv, Jerusalem and its holy sites, an Israeli Air Force base, Masada and the Dead Sea. The group also met with Israel Association Baseball’s local baseball players, and practiced for the March tournament on fields around Israel.

“This is such a great opportunity,” Baker said Monday while he was still in Israel. “It’s an honor to represent the whole country and it’s a huge stage to be playing on. This experience has been really amazing.”

Baker, who grew up Jewish in New York, attended Hebrew school and became a bar mitzvah, can play on Team Israel based on the rules of the WBC, which state that players eligible for citizenship of a country may play on that country’s team. Israel grants all Jews the right to immigrate to Israel and almost automatically claim Israeli citizenship upon arrival. This will be the first time that American Jewish baseball players will represent Israel in a world championship.

Baker said before he could be eligible, he had to prove he was Jewish. “I called my mother to see if she had some kind of confirmation,” said Baker, 27, who played baseball in the Maccabi Games as a youngster and visited Israel in December 2015 as part of Birthright. “Luckily, she had some certificate from my temple,” said Baker,  explaining that she also sent a bar mitzvah photo of him wearing a yarmulke and holding a Torah. “I had had a bar mitzvah, so there was proof,” he added, laughing.

“This is an extremely exciting event for Israel baseball in particular and for sport in Israel in general,” said Peter Kurz, president of IAB. “The team is clearly the most impressive Jewish baseball team ever assembled, and we are very proud that they will be representing our country at the WBC.”

Team Israel qualified for the WBC by defeating Brazil and Great Britain twice in a tournament in Brooklyn, N.Y. in September. Baker started as the pitcher in the game against Brazil and earned the win.

Sixteen countries will compete in the first round of the 2017 WBC in four locations — Seoul, Tokyo, Miami, and Guadalajara, Mexico. The second round hosts will be Tokyo and San Diego, and the championship round will be played in Los Angeles.

This is the first time Israel has qualified to play in the main tournament of the WBC, which has taken place every three or four years since it began in 2006. In 2012, Israel narrowly lost to Spain and didn’t qualify for the 2013 WBC.

On Friday, Dale Singer officially retired after more than four decades as a full-time journalist in St. Louis.  On Sunday, he started as a freelancer with the Jewish Light, tasked with contributing to the weekly editorial that appears on the Light’s Editorial Page.

“It’s been a really good career in a nice field to be in, but I feel it is time: you can only be on deadline for 45 years,” he said.

I’ve know Dale for more than 35 years and worked with him for 25 at the Post-Dispatch. We worked our share of Saturdays together — typically a slow news cycle — so we’d kibbitz at mealtime over Amighetti’s sandwiches or take-out Chinese. Through those conversations, as well as covering several stories together, I learned Dale is not only the consummate newsman but also a terrific guy with a keen sense of humor.

He started his journalism career when he was still a student at Washington University, talking his way into a summer job at United Press International in St. Louis. He did that for three summers, then joined UPI full-time in 1972. He moved to the P-D in 1980 and served as a business reporter and editor, education reporter, assistant editor of the Editorial Page and news editor of the STLtoday.com website.

In 2008, he joined the staff of the St. Louis Beacon, which merged with St. Louis Public Radio in 2013. At both stops, he wrote about education.

Among the many qualities as a journalist I admire about Dale is his attention to detail. He also is lightning fast in getting stories done and getting them done accurately.

Besides freelancing for the Light in retirement, he plans to spend a lot of time on airplanes visiting his daughters and grandchildren in New York City and Silicon Valley with his wife, Merle.

On Jan. 8, a terrorist attack in Jerusalem killed four and injured 17; one of the injured was Sara Kampler, who was a former Bnot Sherut — an Israeli ambassador teaching children about her homeland — in St. Louis from 2009-2010, where she worked at several of the Jewish day schools here.

Sara’s shoulder was dislocated and broken but fortunately, she is expected to make a full recovery. Please keep her in your thoughts and prayers (her name is Sara bat Fruma).