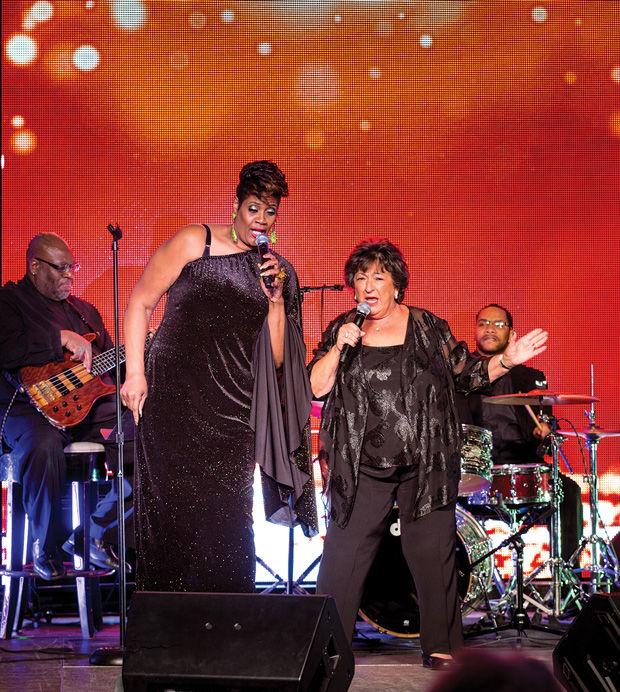 Leave it to Nancy Kranzberg, who always makes a good time better. After she and her husband, Ken Kranzberg, were recognized for their Excellence in Philanthropy at the 24th Annual St. Louis Arts Awards Monday night, Nancy celebrated by taking the stage with another of the evening’s honorees, vocalist Denise Thimes, and together performing W.C. Handy’s “Saint Louis Blues.” Thimes received an Excellence in the Arts award from the Arts and Education Council, which hosted the sold-out event at the Chase Park Plaza.

“I didn’t want anything to take away from Denise’s award or her performance,” Nancy said explaining that their duet had been planned but was unrehearsed. “But Denise said, ‘Don’t be ridiculous.’  “She and I are buddies. I’ve known her for years. She performed at my 40th birthday. I’m going to be 71 in February.” The Kranzbergs are credited with supporting more than 500 civic, social and arts organization with their philanthropy; a good number of these greatly benefit local Jewish causes and agencies. One thing they “get” better than most is the importance of a donation of $500 or $1,000 to small non-profits and charitable organizations.

As any event planner knows, it takes time to grow an event. And the best way to do just that is by positive word-of-mouth.

In addition to the three-day conference, St. Louisans can take advantage of a new SLBC Speakers Series, which features Artson and Talve, along with Rabbi Micah Greenstein of Temple Israel in Memphis, Tenn. The first of these free sessions, set for 7 p.m. Sunday, Feb. 15, will examine modern Jewish audiences and whether our calling has changed as Jewish professionals, educators and lay leaders. The second session, at 7:30 p.m. Monday, Feb. 16, will look at the balance and connection among humility, ego and  courage and how each affects leadership.

Although free, RSVPs to these sessions are requested by emailing Rabbi Brad Horwitz at [email protected]

Registration for the SLBC national conference is available online at songleaderbootcamp.com/register. The cost for the three-day program, including materials and meals during conference hours, is $395. Scholarships and discounted group rates are available.

In an unprecedented effort led by a team of 27 African-American business leaders in New York, organizations across the U.S. coordinated a massive national campaign to find African-American business leaders to underwrite free admission to “Selma” for students around the country. As a result, several St. Louis area theaters are offering free admission to any 7th, 8th and 9th graders who show a student ID or report card at any of the following locations: Wehrenberg O’Fallon 15 Cine, AMC Creve Coeur 12, Moolah Theatre and Lounge and the Regal St. Louis Stadium 18 and IMAX.  Ticket are available while supplies last.

Mark your calendars for 7 to 9 p.m. Wednesday, Feb. 18. That’s when the results of a new demographic study of the St. Louis Jewish community – the first in more than 20 years — will be revealed and explained. The venue for the presentation is still being decided. For more information, check out the commentary piece by Jewish Federation of St. Louis President and CEO, Andrew Rehfeld, on Page 11.