Not to be forgotten 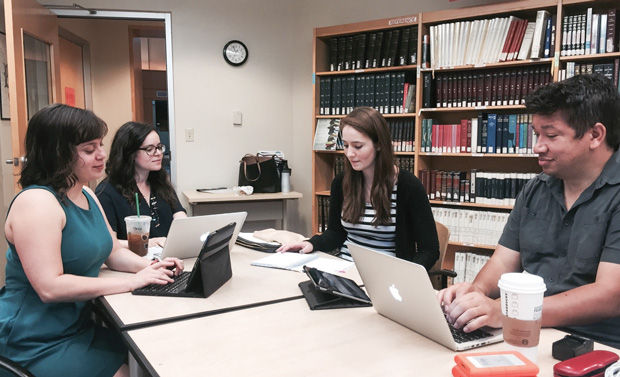 Aug. 9 marks the one-year anniversary of the death of Michael Brown, an unarmed black teenager who was fatally shot by a white police officer in Ferguson. Brown’s death spawned months of riots and protests in Ferguson and throughout St. Louis as well as other U.S. cities. It also ignited the national “Black Lives Matter” movement, which is seeking to change how police in this country deal with minorities.

As the anniversary approaches, rabbinical student and activist Sarah Barasch-Hagans, 27, and documentary filmmakers Emmett Williams, 48, and Shira Kahan, 31, in cooperation with the Central Reform Congregation, are encouraging people affected by the tragedy to tell their own stories and relate their experiences in the aftermath of Ferguson. Hagans, Williams and 17-year-old intern Shoshana Williams, a CRC congregant who is working with the group, all grew up in St. Louis.

Called the Fargesn Media Project, after the Yiddish word for “forgotten,” the effort is designed “to document and preserve this new phase of the Civil Rights Movement for future generations,” says Barasch-Hagans.

A student at Reconstructionist Rabbinical College in Philadelphia who is spending the summer here, Barasch-Hagans explains the project has two main goals: giving a voice to the people of Ferguson and documenting how African-Americans and the Jewish community came together in protest.

“Instead of letting the media tell the story, we want to help the people of Ferguson, and the people who marched alongside them, to tell their own narrative,” Barasch-Hagans says. “We will tell the stories of how communities evolved, evaluated and changed in response to history unfolding around them.”

On Monday, the Fargesn team was gearing up for another day of filming a seven-episode web series, which is part of the overall project. The day before, they had been filming at MoKaBe’s coffeehouse, which served as a safe haven for protestors when the action took to the Shaw neighborhood. In late November 2014, people in the coffeehouse got caught in the crossfire after police fired tear gas to disperse crowds angered by a grand jury decision not to prosecute the officer who shot Brown.

“MoKaBe’s was a great community gathering place for a wide range of people of all colors and faiths,” says Kahan. “It’s a family business that opened its doors and kept them open, even the day after it was tear-gassed. To me, (the owners) did the community a great mitzvah and did so quietly, without fanfare, and did it everyday.”

The MoKaBe’s segment, the group agreed, is the only one of the seven segments that doesn’t have a strong Jewish component. Other episodes will focus on the relationship between CRC Rabbi Susan Talve and Pastor Traci Blackmon as well as CRC member KB Frazier and native St. Louisan Graie Barasch-Hagans, both of whom are Jewish and African-American (Graie is also Sarah Barasch-Hagans’ husband).

Barasch-Hagans says the seven episodes will be ready for viewing in early August at fargesn.com, with one segment airing each day leading up to the Aug. 9 anniversary. In addition, she and her team are encouraging anyone who wants to tell his or her story as it relates to the aftermath of Ferguson to come to CRC, 5020 Waterman Boulevard, from noon to 2 p.m. Aug. 1 or 8:30 to 9:30 p.m. Aug. 4, or the Ferguson Library, 35 N. Florissant Road, from noon to 6 p.m. July 31 or 10 a.m. to 4 p.m. Aug. 8. Also, on Aug. 9., 10 filmmakers will be tasked with making a short documentary to tell the story about how things have or haven’t changed in the past year throughout the St. Louis area.

Barasch-Hagans hopes that media project will ultimately result in more people working together for racial justice. “Perhaps they will want to be involved in their tikkun olam group at their synagogue or become vocal about their children’s textbooks being more diverse,” she says. “If people saw these types of movements and actions as easy and accessible, more people would be involved.”

For more information about the Fargesn Media Project, or to donate, go to indiegogo.com/projects/fargesn-media-project.

After 15 years, the National Council of Jewish Women’s Back to School! Store will be leaving CRC and moving to Temple Israel in 2016. CRC has been host to the event since the beginning.

“We are literally busting at the seams here,” said Nancy Weigley, who staffed the store for eight years as program director at NCJW and is now executive director of CRC.

“CRC has been an unbelievable host – you couldn’t ask for better,” said Weigley. “But we have just outgrown the facility. The parking alone (at TI) will be so much better.”

Another change Weigley has noticed over the years is the age of the volunteers. “They are getting younger and younger,” she said. “It seems every single year one of the co-chairs is pregnant.”

Late last week, I lost my wallet in the Delmar Loop. At the time, I didn’t know if it was lost or had been taken, but suffice it to say, once I realized I didn’t have it, I went about the thankless task of canceling my credit and banks cards, and applying for a new driver’s license.

About four hours after I realized the wallet was gone, a man showed up at my front door to return it. I wasn’t home, so he left the wallet with my 17-year-old son. Jackson said the man drove a Metro Transit car and said his name was Ramiero (or at least that’s what Jackson thought he said).

The next day I went back to the Loop to see if I could find Ramiero and thank him. Having no luck, I finally spoke to a man working on the trolley system who gave me the phone number of a guy named Eddie at Metro.

Eddie couldn’t have been nicer but said after asking around, no one at Metro knew of a Ramiero or had heard of anyone returning a lost wallet.

So here I am, sad that I couldn’t thank this stranger in person but so touched by his selfless act of kindness. I have no doubt good karma will come his way.