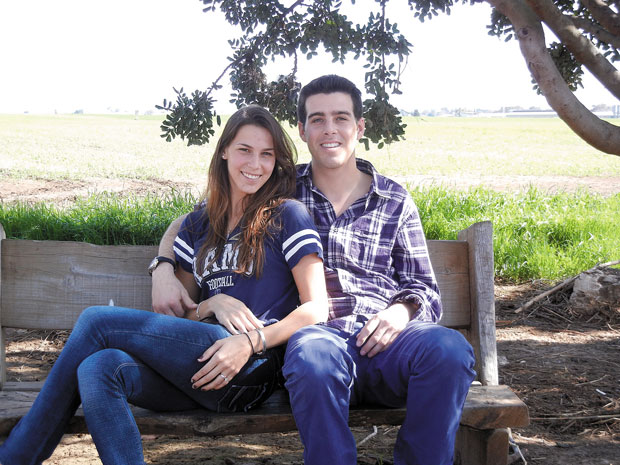 Well it’s official, 2014 marks 51 years that the St. Louis Jewish Light has been serving the St. Louis community as an independent Jewish newspaper. No, there are no galas planned to celebrate year 51.  Much as we loved the hoopla surrounding our golden anniversary in 2013, we are looking forward to living the reality of our next 50 years.

Well they didn’t win the Nefesh B’Nefesh grand prize, but University City native Jason Ast and Andrea “Andy” Surasky did get married in late July, reports Jason’s father, Martin Ast. The couple had entered the contest hoping to win $10,000 to help build their life together in Israel.

Jason, who initially went to Israel to attend culinary school, eventually met — and fell in love with — Andy, who had made aliyah a few years earlier with her family. Martin Ast says that three weeks after the wedding, Jason and his father-in-law opened a pizza and dairy restaurant in Ra’anana, where Jason and Andy now live. “The business is going very well,” says Ast, adding that his son is finishing up the paperwork to complete making aliyah.

Miriam Berger had originally brought Jason Ast to our attention because for many years while growing up, he took it upon himself to push her father in his wheelchair to shul at Young Israel every week. “I don’t know what propels people to do true acts of chesed like this, especially at such a young age, but wow, what an astounding human being,” Miriam wrote, hoping people would return the kindness and vote for Jason and Andy in the wedding contest. While they didn’t win $10,000, they were awarded a secondary prize, a gift certificate to IKEA.

All of us held our collective breath when we learned that Lily Hoberman, now a fourth grader at Saul Mirowitz Jewish Community School, was one of three campers struck by lightning last summer on an athletic field at Goldman Union Camp Institute in Zionsville, Ind. Thankfully, Lily and another camper, Noah Auerbach, 9, of Kentucky, were released from the hospital in a matter of days. But the third camper, Ethan Kadish, now 13, suffered extensive brain injuries and spent five months recuperating in a hospital near his home in Cincinnati.  While Ethan still has a lot more recovery ahead, he was finally released in time to spend Thanksgiving — and Hanukkah — at home with his family.

The St. Louis Jewish community never seems to have a shortage of interesting folks doing unusual things, including teens and pre-teens. Some of the ones we featured in 2013 included 18-year-old break dancer Jack Cohen, of west St. Louis County, who was named a Missouri recipient of the annual Young Entrepreneur Awards; fifth grader and University City resident Gabe Fleisher, who wrote a book about his Flynn Park elementary school and is editor and publisher of the weekday e-newsletter “Wake Up to Politics”; Annie Kopp, who turned her experience of being bullied at Ladue Horton Watkins High School (she graduated in June) into a 12-minute, anti-bullying comedy shtick called “Stand up to Bullying” and 12-year-old Avrohom Yosef Staum, a Torah Prep student, who got the U.S. Senate to declare his National Technological Innovation Day as a national holiday for the first time on Oct. 29.

Taking another aim at gun laws

A year ago, we were still mourning the loss of 20 first-graders and six educators after the Dec. 14th massacre at Sandy Hook Elementary School in Connecticut. Shortly after the massacre, Missouri State Rep. Stacey Newman, D-Richmond Heights, promised to introduce a bill in the Missouri Legislature ensuring background checks for all gun sales in the state. Newman made good on her promise, though, as she’s the first to admit, the bill went nowhere fast.

“That’s the case with the majority of bills introduced by Democrats in the Missouri Legislature these days,” said Newman. “They don’t see the light of day.”

On Monday, Newman said she would reintroduce the bill as soon as the legislature convenes. What makes her think this time will be different?

“We have more people paying attention,” she says. “I also will be making a much larger effort to insist on a hearing (for the bill). If I’m not granted one by legislators, if Speaker of the House (Timothy Jones) and Floor Leader (John Diehl) ignore this bill again, we will do a public hearing outside of the Capitol. This is exactly what other states are doing. If people attend and weigh in, then hopefully we can get some traction.”

Newman says that she has been working closely with like-minded legislators around the country as well as mother’s and mayor’s groups bent on stricter gun laws, including universal background checks on all firearms purchases. She adds that outgoing New York Mayor Michael Bloomberg has been a huge proponent of this effort, donating hundreds of thousands of dollars.

“These efforts are gaining momentum and successes in a lot of states,” says Newman. “Even Colorado recently passed some of the country’s most stringent gun laws. There is hope for Missouri but we do need citizens to get more involved and make some noise.”