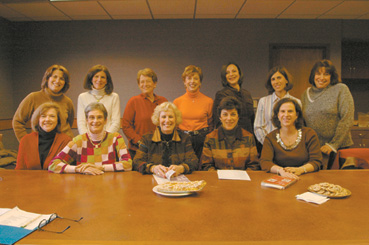 With little more in common than a passion for learning, 12 women signed up for advanced Jewish study through the Florence Melton Adult Mini-School offered through the Central Agency for Jewish Education. Six years later, that same group, with one addition — diverse in age, affiliation, background — gathers to study Jewishly every month.

A funny thing happened on the way to enlightenment.

“We’ve created this bond among people who basically didn’t know each other prior to coming together at Melton,” said Diane Gallant, a member of the study group. “We’ve bonded in a very close and wonderful way. We know things about each other maybe our best friends don’t know.”

“We have gone out and sought our own learning, and we learn in the style we like to learn, which is the Melton style,” Gallant said.

Esther Zimand, who coordinates adult education for CAJE, describes that style: “Melton uses Judaic text — the Bible, Talmud, codes, philosophy, history — as a basis for discussion. Discussion takes off from the text rather than someone lecturing their own opinion. With the text as a source, from there you could go on and on.”

And that’s the way the group’s study has progressed. Each session begins with a prayer and a topic that quickly digresses, but it is a divergence the group loves and one that always results in some personal or educational discovery. That is the kind of learning these women determined to continue after their initial Melton experience opened to them the world of Judaic thought, subject to vast interpretation. Or as Rabbi Carnie Rose put it when he facilitated the group study in December: “Judaism is a religion for thinking, feeling people.”

“We just didn’t want to stop,” said Ann Epstein, a member of Temple Israel for 45-plus years.

It was a unanimous consensus, says Galia Movitz. The first year post-Melton, Rabbi Ephraim Zimand, who had taught the class, agreed to continue with the group.

“It was a joint adventure in learning,” Rabbi Zimand said. “They were very insightful and questioning, which led to significant discussion. It was a delight to spend time studying together with them.”

“From there, we thought it would be neat to study with different rabbis, scholars in our community,” Movitz said.

That list included local educators as well as rabbis. “We tried to get someone from all denominations, because the group itself is very diverse,” Movitz said.

“At first we thought we would get teachers to continue with us,” said Jane Tzinberg Rubin. “Then we took a new approach with rabbis, as a way to gain familiarity with rabbis in the community.” Rubin is a member of B’nai Amoona Congregation and Central Reform Congregation in St. Louis as well as a congregation in Chicago.

This group, Movitz says, happens to be extremely inquisitive. “We challenge; we challenge each other, we challenge the instructors,” she said.

No matter what the topic, Movitz said, “every single instructor says there’s no way to complete the objective they have set for the session. They go places and to topics with us that were not in their lesson plan. And it’s consistent. It happens every time.”

That’s typical for the group. “Our study takes us to a place where we never know what the end result will be, but it also gives us an opportunity to learn about one another,” Movitz said.

And to learn from one another, says Jayne Langsam, who belongs to Temple Israel. “The diversity of the group allows us to bring in different things from different areas of the community back to the group as a whole. That’s the advantage of being of diverse ages and synagogues,” she said.

Diversity of opinion on any given subject is something that appeals to Ann Epstein, while Jayne Langsam counts personal growth among the benefits of the continuing educational pursuit. “We all were raised differently, and we look at things differently,” said Laurie Chod, a member of B’nai Amoona.

Gallant said she finds it interesting to discover what other people believe. “I know what I believe.”

And while they differ in opinion and the thought process, Gallant said, “We understand each other. One of the greatest beauties of this group is the respect we have for each other. We argue amongst ourselves and with the rabbis, but it’s always respectful. No one is afraid to say what they think or to reveal.”

Jane Rubin has become the conduit for the group, communicating with instructors to set up the sessions and topics. “The only requirement is that we like the topic to be some text study because that was the Melton method,” Rubin said. Though occasionally, she says, they will tackle a contemporary subject, such as Israel, Zionism, Israeli-Arab relations or the like.

Rubin reports that all the rabbis she has contacted are eager to work with the group.

Darien Arnstein, who arranged for her rabbi, Mark Fasman of Shaare Zedek, to teach in January, reported that he was eager to accept. “He was excited to hear that there was this group who had been meeting for a number of years and energized by the knowledge that there were women who wanted to be learning like this,” she said.

“We ask the rabbis to bring it in Hebrew and English. There are a couple of people who like Hebrew …”

That’s Israeli-born Galia Movitz. “As an Israeli and one fluent in Hebrew, I bring the Hebrew component,” Movitz said. “I like to challenge the Hebrew translations.”

Arnstein, the one member who was not part of the original Melton class, says she has been welcomed into the group and looks forward to the monthly commitment as “a sort of personal growth time. If you go to Shabbat on Saturday, that’s one kind of experience. But this is study on a different level,” said Arnstein, who belongs to B’nai Amoona and Shaare Zedek.

It has a ripple effect, says Susie Epstein of Temple Israel. “I teach Sunday school, and I can take this to the children.”

Ceil Tobin likes to share educational enlightenment not only with her husband but also with her “very Orthodox” children. “I love when I throw out what I’ve learned and then tell them where it came from.”

For Barbara Rubin and Brenda Pereles, the continuing education has inspired them to delve deeper into different aspects of their religion. “The most I’ve gotten out of it is I’ve reconnected to Judaism, but a deeper commitment through the knowledge,” Rubin said.

Pereles was prompted to join a Shaare Emeth trip to Israel “after learning more about my religion,” she said. She wanted the whole family to take the trip with Rabbi Jim Bennett. “I never had a desire to go to Israel, but after being in the study group and taking Melton, I was more curious to see Israel, which was amazing,” Pereles said.

(Other members of the group include Renie Lauter and Robin Chervitz.)