With his old life now history, Jeff Smith embarks on building a new one 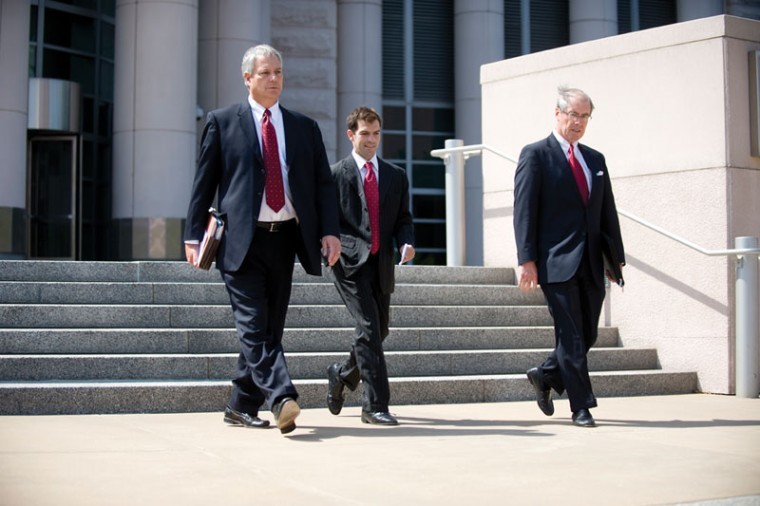 No more 4 a.m. telephone calls from a Federal Bureau of Prisons official verifying that he’s home. Lots of time on his bicycle tooling around in the fresh air.

Such are the seemingly trivial changes in the life of former state Sen. Jeff Smith that, for the moment, count among the most significant.

Smith officially ended his prison stint last Thursday. He now seeks to rebuild his life, which he acknowledges will be far different from what he and allies once had envisioned.

Just over a year ago, Smith had made headlines – and ended a promising political career – when he admitted to a federal judge that he had lied to the FBI about his knowledge of the anonymous distribution of a campaign postcardaimed at helping his almost-successful 2004 bid for Congress.

Then a charismatic political science instructor and doctoral student, Smith had attracted an army of college students who helped run his campaign for the open 3rd District congressional seat that had been occupied by prominent Democrat Richard A. Gephardt for more than a quarter of a century.

Smith was among a crowd of 10 Democratic candidates, most of whom were targeting the best-known among them, Russ Carnahan. Carnahan ended up narrowly defeating Smith to win the August 2004 primary and, subsequently, the congressional seat. (But Smith arguably benefited more, when he later became the star of an award-winning documentary, “Can Mr. Smith Get to Washington Anymore?”)

Late in that 2004 primary fight, thousands of postcards attacking Carnahan’s attendance record in the Missouri House were sent to prospective voters around the district. The postcards did not identify who was mailing them or who paid for them  – violations of federal election law.

Carnahan suspected Smith and fellow rival Joan Barry because they had conducted a news conference with the same attacks shortly before the cards went out. Carnahan filed a complaint against both with the Federal Election Commission.

Years later, by then a state senator, Smith denied knowledge of who was behind the postcards to the FEC and the FBI. But a federal investigation determined that he and several campaign aides knew of the cards and had spoken ahead of time to the Democratic operative responsible: Skip Ohlsen (now in prison on unrelated charges).

A Smith ally, Steve Brown, (who along with Smith was one of six members of the informal “Jewish caucus” in the Missouri legislature) had raised money to bankroll Ohlsen’s activity. Such coordinated help was illegal because Smith’s campaign reports did not cite the contributions (which also exceeded the federal campaign donation limits) or the spending for the postcards.

Still, the missteps would likely have prompted only a fine if Smith had told the truth. Instead, the Smith campaign’s denials snowballed into a federal crime and convictions on charges of obstruction of justice.

Brown and Nick Adams, Smith’s former campaign treasurer, were convicted and sentenced last year to probation. Brown – who wore an FBI wire to record conversations with Smith and Adams  – resigned from his state House seat and also surrendered his law license.

Besides resigning his Senate post, Smith was sentenced to a year and a day in prison. He ended up serving about eight months at a minimum security facility in Manchester, Ky.

In August, Smith was released to a halfway house in St. Louis. After obtaining a job, Smith was allowed to live at home but was checked on nightly by the Bureau of Prisons to make sure that he complied with his curfew. All told, Smith says he was under halfway-house supervision for 89 days.

Smith avoided the press during that period because he didn’t want to say anything that could threaten his early release.

For the moment, Smith says he has found employment doing “research and some freelance writing” for a couple of clients. He declines to identify his employers, explaining that he will leave it to those who have hired him to decide if they want to go public.

But he’s open to discuss about almost everything else, from his life in prison to his future – which includes marriage in May.

Smith is completing work on a book – he’s written 400 pages and estimates he has about 50 pages to go  – and has obtained a New York agent who’s trying to get him a contract.

Smith also has applied for several professorships, locally and elsewhere.

Wherever he ends up, Smith plans to maintain his permanent home in St. Louis. “I want to make my life here,” he said. “This is where my family is, where I hope to start my family.”

The book will focus on Smith’s political rise and fall, and his tenure in prison. Although he was serving in a minimum-security facility, Smith refutes any perception that it was “a country club prison.” About 90 percent of his fellow inmates were drug dealers, Smith said, who had originally been serving their time at higher-security prisons.

Smith applied for several teaching jobs at the prison, such as teaching high-school equivalency courses or classes on civics or black history but was turned down for all of them.

Instead, Smith – a slight man who entered prison weighing 117 pounds – was assigned to work in the food warehouse.

His six co-workers outweighed him by two or three times, Smith said. The crew unloaded trucks delivering 40,000 pounds of food a day to feed the prison population of about 2,000.

“The stuff we were carrying was really, really heavy,” Smith said. “It was taxing. On the one hand, it was difficult. On the other hand, I got in much better shape”

Smith gained almost 25 pounds, much of it muscle.

On the side, Smith also provided informal tutoring and helped fellow inmates who needed to fill out official forms or other documents. Smith said he observed few educational opportunities or vocational training for inmates, some of whom were close to illiterate.

The lack of job training or educational courses, he said, makes it harder for inmates who complete their sentences to have the skills necessary to find legitimate employment.

“A lot of the guys there have been locked up 15 years, and they don’t even know what the Internet is,” Smith said, adding that even minimal computer skills are now necessary to search for a job.

Inadequate job skills also may have contributed to another disturbing attitude that Smith witnessed often while incarcerated. “A lot of people in prison, they hate America,” he said. “They hate the prosecutor, hate the judge.”

In Smith’s case, he said, his views took a different turn. “I really learned to appreciate freedom and all the things that go with being a free person.”

“Overall, while I wouldn’t recommend it to anybody, I learned a ton about the criminal justice system,” Smith added wryly.

Hopes his missteps can offer lesson

Aside from politics and prison, Smith said his book also will get personal, discussing “friendship and betrayal.”

Alluding to the 2004 episode that destroyed his old life, Smith said, “I should have never got myself in the position of either keeping my word to my close friends or lying to a federal agent.”

The irony of it all, said Smith, is that the postcard incident was a footnote in his intense congressional campaign, which saw him working 16-17 hour days for more than a year. “I probably didn’t spent five minutes thinking or talking about this postcard,” he said.

But that five minutes altered his life. Smith said he has only himself to blame for the aftermath.

“Clearly what I should have done when my aides came to me and said ‘We just met with this guy. He wants to know what you think of him doing this,’ I should have said, ‘Stay away from him. I don’t want you talking to that guy again. What he wants to do is a violation of election law.'”

Smith said he hopes to get a chance to press on future students, and politicians, the lessons from his missteps. Such as:

A) “Obviously, never lie to a federal agent.”

B) “It’s not always good enough to do things that are close to obeying the law. … You always need to abide by the letter of the law, or there can be serious consequences.”

C) “Be careful about who you include in your inner circle and who you trust.”

In his case, he added, “That moment of weakness led to the unraveling” of all he had worked for. “I’m sorry that I let people down,” he added.

Smith said he is grateful that many former students, volunteers and state legislators have continued to keep in touch with him. He’s particularly grateful to his longtime girlfriend, now his fiance, who stood by him. The couple is slated to get married in May.

By law, he can’t hold public office in Missouri although federal law would allow Smith to run for Congress since he completed his sentence. Smith has no plans to seek elective office again but does hope to continue working on the issues he cares about.

In any case, Smith now is focusing at the moment on rebuilding his life. It won’t be the same as his old one. But he hopes he can still make a difference.

The St. Louis Beacon is online at www.stlbeacon.org