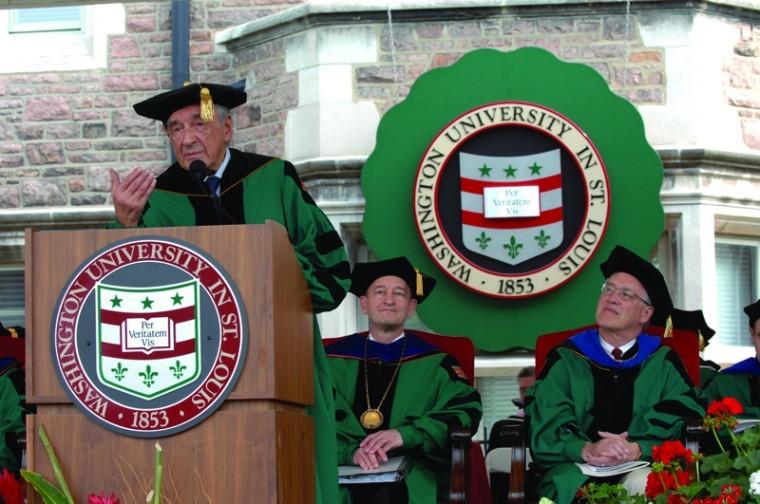 Elie Wiesel, Holocaust survivor, prolific author and Nobel Peace Prize Laureate said he does “not believe President Barack Obama is anti-Israel.” He added that the president’s controversial speech last week at the State Department calling for a peace plan based on Israel returning to its 1967 borders was intended to “stimulate conversation” in order to get peace talks started again between Israel and the Palestinians.

Wiesel made those remarks in an interview following his address at the 150th Commencement of Washington University last week, in which he rejected despair and denounced fanaticism in all of its manifestations.

Wiesel spoke before the 2,719 graduates of Washington University along with their family members, faculty and friends who packed the university’s quadrangle on a sun-drenched Friday morning. Wiesel, who has already been presented with over 100 honorary degrees, was named an Honorary Doctor of Humane Letters by the university.

In his remarks, delivered in his soft-spoken voice, Wiesel said that his Jewish identity remains central to him despite all he has gone through, because “we should protect the identity of who we are.” He added that one of the tasks of a Holocaust survivor is to “remember and don’t forget, and to remember not to forget.” He also observed, “After all I have gone through, I still have faith in humanity.”

Wiesel stressed that his experiences have underscored to him the importance of following the biblical commandment, “Thou shalt not stand commandment, “Thou shalt not stand idly by while your neighbor bleeds.” He added that despite having survived the Holocaust, “I still have faith in God, although I quarrel with Him from time to time. I don’t know if God is annoyed by this or not.”

Wiesel reminded the graduating class that they are going out into a world that is so violent. “Remember what your teachers taught you at this great university,” he said. “We see so much death, but despite all of it, let’s dedicate and celebrate life.”

Wiesel and his family were deported in 1944 to Auschwitz, where his mother and sister were killed by the Nazis. He and his father were transferred to Buchenwald. His father died just days before the camp was liberated by the Allies in 1945. Wiesel was 15 at the time.

After moving to Paris where he became a journalist and author, he wrote “Night” as a memoir of his experiences. The book remains an international bestseller and has been translated into over 30 languages. He later moved to the United States where has continued his writing and advocacy not only for the State of Israel but in support of the victims of genocide in places like Cambodia, Rwanda and Darfur. For his humanitarian efforts he was awarded the Nobel Peace Prize in 1986. He is also on the faculty of Boston University in the departments of religion and philosophy.

Wiesel’s speech was just a day after the controversial Middle East policy address by his fellow Peace Prize Laureate, President Obama, which drew a sharp rejection and face-to-face rebuke from Israeli Prime Minister Benjamin Netanyahu at a White House press briefing following their talks. In the interview following his remarks, Wiesel was asked his opinion of Obama’s State Department speech calling for a two-state solution based on Israel returning to the borders it had prior to the 1967 Six-Day War “with agreed-upon land swaps.”

Asked if he thought Obama was less supportive of Israel than previous presidents or was even anti-Israel, Wiesel said, “I don’t think so. I have known President Obama and also Secretary of State Hillary Clinton for some time. I do not believe he is anti-Israel. I think the speech was intended to encourage Israel and the Palestinians to again sit down and talk to each other.”

Wiesel added that there were practical difficulties with Obama’s proposal. “Before 1967, the West Bank and (the Old City) of Jerusalem were under Jordanian control. Does that mean that they would return to Jordanian control?” He added that he thought that Palestinian Authority President Mahmoud Abbas made a mistake” in signing the Egyptian-brokered unity deal with Hamas, “whose charter calls for the destruction of Israel. There can be no agreement with a party that calls for the destruction of the other party.”

Despite the hurt feelings generated by Obama’s original speech and Netanyahu’s initial response, Wiesel said, “You cannot bypass America in the peace process, even by going to the United Nations. I believe that the president’s goal is to get the parties to sit down and talk. I can recall bringing together Abbas with former Israeli Prime Minister Ehud Barak. When they met, they embraced and they cried, and tears came to my eyes. I hope they can return to that spirit.”

Asked about the so-called “Arab Spring” sweeping across the Middle East and North Africa for the past several months, Wiesel said, “I am for it, especially for the young people who are seeking better lives and more open societies in many of these countries. The question is whether these are revolutions, which have specific goals and leaders or rebellions, which do not have specific plans and clear leaders. Some of these uprisings are revolutions and others are rebellions. It will take time to see how they ultimately take shape.”

The charismatic Wiesel, who is 82 and still in great demand as a speaker, says he sometimes turns down engagements because he is slowing down. “One event I tried to turn down happened when the Commissioner of Baseball called and asked if I would throw out the first ball at the 1986 World Series opening game (between the Boston Red Sox and California Angels). I tried to turn him down, but then my son came into the room as said, ‘Dad if you refuse to throw out the first ball, I will be the laughingstock of the school. And so, at the second game, I did it,” he said.

Wiesel has such a mystique surrounding his name and career that some admit to being too much in awe at first to talk to him. Risa Zwerling Wrighton, the wife of Washington U. Chancellor Mark Wrighton, in whose home Wiesel stayed said, “Here I was face-to-face with this brilliant humanitarian, author and survivor. I was a bit awestruck, but he immediately put me at ease. His is extremely kind and is a very warm and gracious person.”

Rabbi Hershey Novack, director of Chabad on Campus at Washington U., said, “Dr. Wiesel is one of the last of the great heroes of the previous century, a real lion of ethics and morality and ideas.

“Students said after his commencement speech that they were very uplifted by his positive, optimistic view of humanity. And certainly, coming from a person who has experienced what Dr. Wiesel has experienced, all that he has gone through, his message resonates strongly with today’s college students.”