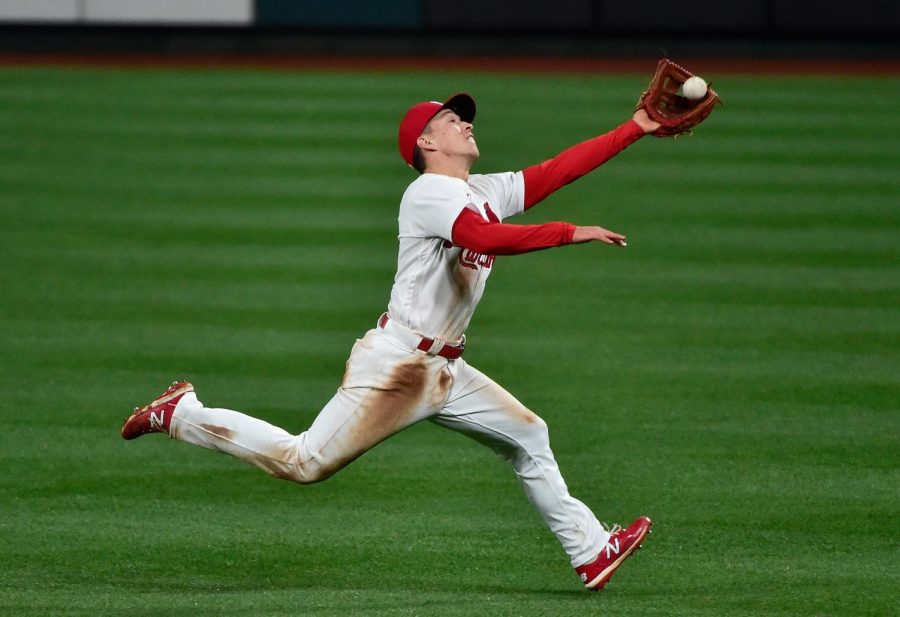 Plug it into any handy-dandy Yiddish translater. Most Valuable Player in Yiddish is ‘merst vertful player.” And for the first part of this young season, Tommy Edman has been very ‘merst vertful.’

On Feb. 5, Kolten Wong signed with the Milwaukee Brewers, making it official that the two-time Gold Glove winner wouldn’t be at second base for the St. Louis Cardinals for the first time since 2012. Enter Edman, the do-whatever-was-needed utility player assigned to Wong’s spot.

The gamble was as honest as it was forthcoming, with Wong’s heftier 2021 price tag burning into the Nolan Arenado reserve. Edman wasn’t a sure thing. A productive 2019 season (bolstered by 11 HR and .850 OPS in 326 at-bats) was followed by a subpar 2020 season, where Edman’s OPS dropped to .685. Faced with full-time work and a position that could complete one of the strongest infields in baseball, could he pick up the slack there and offer the team a useful leadoff bat as well?

A month into the season and the early answer is a resounding yes. Edman’s 35 hits and 130 plate appearances rank first in the National League and he is a plus-defender, with his name finding itself in just about every Top 10 category in the league for his position. After accumulating just 13 extra-base hits last year in 204 at-bats, Edman already has nine this season in just 119 at-bats.

But that’s not even the most impressive thing about Edman’s season so far. That would be his newfound ability to limit his strikeouts and increase his walks. Coming into the season, he had struck out 109 times and walked just 32 times. Through a month this spring, he has just 12 strikeouts to go with nine walks. Nine extra-base hits and nine walks.

Don’t forget about the man’s versatility. He can play second, shortstop, and then head out to right field if Mike Shildt needs to shift the bodies around on the lineup card. When Harrison Bader was missing in action and the outfield was delivering putrid results last month, Edman was picking up the slack out there. With a healthier roster, he gets to thrive with Paul DeJong in the field each night.

It’s not like Edman has to be a Gold Glover like Wong, just help the other G.G. winners on the infield thrive. When you have a ground-covering cannon-equipped third basemen like Arenado and a superior vacuum like Paul Goldschmidt over at first, the middle guys don’t need to be Houdini. Thankfully, DeJong and Edman know how to pull two outs out of their hat on a single play.

How about the stolen bases? Late last week, Goldschmidt stole a base and that was the first non-Edman bag theft on the team up to that point. He has four on the season and will certainly end up with double-digits. A leadoff bat who can hit the ball over the wall as well as consistently get on base has eluded the team over the past few seasons since Matt Carpenter’s struggles began. Everyone from Dexter Fowler to Wong to Bader tried to fill that spot, but none have been as successful as Edman.

He does all the little things that a teammate needs to do, but he also performs many tasks above average. Edman’s range and fielding position rank in the top 5 in the NL for second basemen, and the extra layers of comfort that come from consistent repetitions there should only see his defensive play get even better.

What are the sabermetric specialists over at Fangraphs saying about Edman?  There’s a popular stat called wRC+, which scales runs per plate appearance  for a hitter and compares it to other players and different ballparks. 100 is considered average, and Edman sits at a 117 wRC+ as play opens today. The walk-to-strikeout ratio, BB/K, is 0.75, which is a big improvement over the last two years mark that didn’t climb over 0.50. It helps that his strikeout percentage is just 9%, after finishing at 21% last year.

According to Fangraphs’ pitch info and plate discipline, Edman is still swinging at pitches outside the zone, but he’s also making good contact with those more carefully-placed offerings. In the field, he has saved five runs at second base and one in the outfield.

All over the field, Edman is an above-average player and a switch-hitter to throw a monkey wrench into the other team’s bullpen plans. Someone the team can count on, or a reason they can pass up on a 30-year-old Wong. Instead, Bill DeWitt Jr. and John Mozeliak invested the team’s future in the just-as-productive Edman, who only costs around the league minimum and won’t be a free agent until 2026.

It’s never easy saying goodbye to a fan favorite, but it sure is nice when the replacement is someone the fans and team can rely on to produce. The 25-year-old Tommy Edman has been both a surprise and a breath of fresh air for the Cardinals.