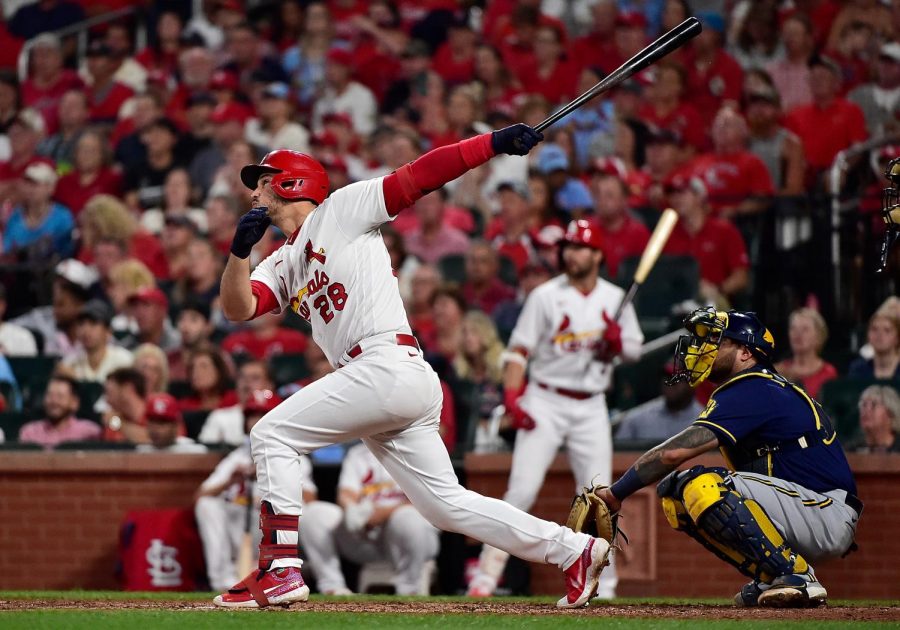 When the St. Louis Cardinals acquired Nolan Arenado — one of the best all-around players in the game-this past January, a layer of doubt filled Cardinal Nation’s minds. It centered around a couple lingering questions:

Could he hit well outside of Coors Field, a place known to enable hitters’ performance?
Would he opt-out of a very lucrative contract after the 2021 or 2022 season?

As September rounds third base and the Cardinals seem incapable of losing a game, allow me to ease your minds: He’s not going anywhere. And the hitting is just fine away from Colorado. Arenado’s performance at the plate has been as advertised, accompanied by league-best defense at third base.

What many failed to recognize back in January was how versatile Arenado can be at the plate. He’s not a simple home run-bashing slugger who relies on ballpark distances and advantages to rack up stats. He’s a line drive hitter who can hit it over most walls in the league.

Arenado’s hard-hit percentage–baseballs that carried an exit velocity of 95 mph or greater — is 38% for his career. In 2021, it’s 37%. He barreled 34 baseballs in 2019 with the Rockies; he’s collected the same amount of barrels this year, which is a fancy way of saying he got all of that one.

Few can argue with the 34 home runs, 34 doubles, and the 4.0 fWAR that Arenado has provided this year, along with a 115 wRC+ (100 is average) and elite defense. Defense that has saved seven runs and 48 plays made outside the zone. Arenado has managed to complete 16% of remote plays, in other words ones that carried a 1-10% chance of being made.

More than anything statistical, Arenado brought over a hunger for winning that became infectious with this team. Throughout the struggles this season-when injuries and underperformance reckoned with St. Louis’ playoff chances-Arenado has remained connected to the task at hand, which is to win a World Series.

While he has assured the media and fans with his words that he will stick around in St. Louis, Arenado’s performance in his first year in town shows that his ability isn’t waning even as his birth certificate reads the big 3-0.

He’s also a field general, someone who could handle the reins of leader after Yadier Molina does hang up the cleats. Fans witnessed that during Saturday’s thrillingly unique double play sequence at Wrigley. Arenado was the one who dictated the action around the infield, running across the diamond to follow-up throws and instructing his teammates where to be. That’s a guy who has the game uploaded into his system for life, a true gamer who pushes others to a bigger performance instead of pushing them to the side with his ego.

Did I mention he’s clutch? With men in scoring position, Arenado is hitting .331 on the season with 19 extra-base-hits included. But more impressive in those situations are his strikeout to walk ratio. In 170 plate appearances with runners on second and/or third, he has 23 walks and only 22 strikeouts. When the chips are down, Arenado is locked in.

Any doubts people had about his ability transitioning to Busch Stadium can safely rest their worries in his stats splits. Arenado has bashed 20 of his 34 home runs at home, and hit .279 under the lights downtown, as opposed to .229 on the road.

What some overlooked when he arrived was the complete package that he provides a team. It’s not just the home runs, doubles, sliding plays made outside the third base line, and intensity. Arenado embodies the Cardinal Way unlike most trade acquisitions. This was a situation where the team and player fit like a freshly-broken-in baseball glove. Arenado’s desire for the postseason and the Cardinals’ need for a cornerstone third baseman to pair with Paul Goldschmidt were fires in the sky with similar colors. Something that could-and will-last for quite a few more seasons.

But the first test has been passed. Arenado and St. Louis will return to the postseason, this time with better odds than recent times. A marriage that may have taken a while to set up (with many broken trade talks along the way) has already provided dividends during Year One.

Against all doubts and concern, Arenado is exactly what the Cardinals ordered, on and off the field.