What happened in Vegas isn’t staying in Vegas 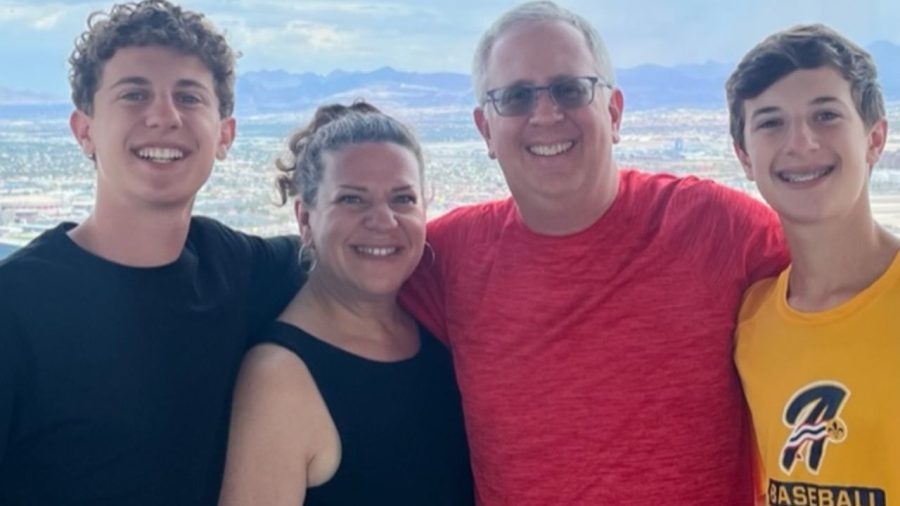 When you think of a wholesome family vacation Las Vegas probably doesn’t top the list. So that’s exactly why we went there. Jeff loves Vegas, but Davis, Leo and I had never been. With two teenage boys, Sin City sounded like a good option. (Mother of the year!)

It’s fun planning what to wear on vacation. Vegas screams sequins, low cut tops and micro-mini skirts.  Unfortunately, my closet screams Ann Taylor Loft, Old Navy, and “Help!” The most daring thing I own is a sleeveless top, something far too risqué for me to wear at home. (Mother’s upper arms aren’t her best feature.) I packed it because Jeff says I should change my rules in another city since nobody knows me there.

I boarded the airplane and saw two people I know. Luckily, I wasn’t wearing the sleeveless top. I would never because God forbid the plane crashed and I couldn’t figure out that whole “seat-as-a-floatation-device” deal, I could take off my sleeved shirt, tie the sleeves, and flop it around to fill it with air like we learned in high school water safety class.

Masks should be required on airplanes. Not due to COVID, but due to bad breath. Several passengers were in the heavy throes of severe halitosis. Airlines should hand out mandatory mints at the gate. Either that, or passengers have to swear on a stack of Bibles not to eat garlic within 24 hours of boarding.

There was a bit of turbulence, which always strikes while I am in the airplane bathroom. Being trapped in that broom closet 30,000 feet in the sky while the aircraft is being shaken like a craft cocktail made me feel the way a silver ball in a pinball machine must feel. Tilt!

It reminded me of a flight I took years ago. Time for a flashback scene, a reenactment of actual events.

On that flight, as predicted, I was in the bathroom when the pilot turned on the “fasten your seat belt” sign because of heavy turbulence. I was jostled about like a popcorn kernel in hot oil. When I got out a flight attendant greeted me.

Flight attendant – Are you OK?

Me – Yes, but I think I touched things I hadn’t planned on touching.

Surprisingly on our trip home we had that same flight attendant from the previous week.

Me – You were our flight attendant last week!

Flight attendant – I remember you! You touched things you hadn’t planned on touching. I’ve been talking about you all week!

Our hotel in Vegas was the only non-smoking resort on The Strip. That was a major bonus considering the entire rest of The Strip was basically an ashtray with bright flashing lights. Smoke came from many sources… cigarettes, vape pens, weed. My family was able to create a new game… Name That Smell!

Our hotel room had two “queen” beds. I question the royalty title of them because we were smooshed in there like an airplane bathroom. I shared a bed with one of my teens, and all night felt his knees in places knees don’t belong. At one point I thought he was actually trying to get back into the womb.

I also learned that bras are optional in Las Vegas. Whether you’ve got small ones or big ones, you are old or young, you work in adult entertainment or not, it’s a full chest free for all on The Strip. I stuck to my plan to only go as far out of my comfort zone as the sleeveless top, even though the Vegas way would have probably been more comfortable.

There was a man on The Strip handing out what looked like baseball cards. He didn’t hand me any, as if he could tell I wasn’t a collector. But Davis and Leo are, so I thought I would grab some for them. Turns out, the players on these cards were not men in baseball uniforms. They were young ladies wearing their birthday suits, and most of them seemed very cold. There were phone numbers shown, I assume for us to call and wish them Happy Birthday. It also said $50 on the card. I find it so helpful to know what young people actually want for a present because not everyone likes an Amazon gift card.

Of course we saw all the sights in Vegas, shopped, saw a show, had dinner with Jeff’s delightful cousins, did the touristy things, and had a terrific time. It was really educational for Davis and Leo, what with all those smells and teachable moments.