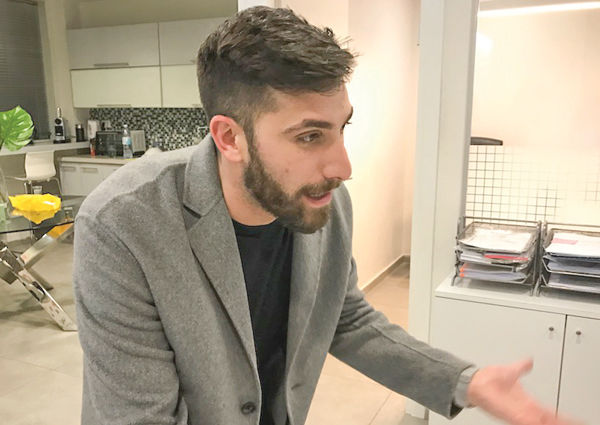 Austin Smith, an American immigrant to Israel, once worked for binary-options companies but now heads a recovery firm to help victims who were scammed.

In 2015, Steve, a retired Presbyterian minister in Kansas City, sold a small farm and emptied a mutual fund and an investment fund. That left him with about $250,000 to invest elsewhere.

“We pretty much have what we want. We buy a new car now and then and have a nice house and live relatively modestly,” said Steve, 81, who added that he and his wife had started to think about taking a more “flamboyant” vacation.

After the farm sale, Steve — who asked that his real name not be used — discovered Binary Book on the internet. Binary Book is a company promoting significant returns on binary options, in which a person chooses whether or not a certain asset — be it a stock, commodity, currency — will be above or below a set price, in a certain amount of time. Essentially, the person bets on this prediction.

Steve said he now wishes he had invested his money more conservatively. That’s because it’s all gone.

He didn’t know it at the time, but Binary Book was based in Israel, as are many binary-options companies. Many, too, are under criminal investigations and facing increased regulation.

Lawyers such as Tami Hamm and some former binary-options insiders are trying to help people like Steve recover the money they lost. Hamm, who is Jewish and was born in Israel, now splits her time between University City and Beit Shemesh, near Jerusalem.

Having seen reports in American and Israeli media about the scale of the problem, Tamm said she longs “to have a part in clearing (Israel’s) name because it’s such a small percentage of Israel that is involved — yet it makes a lot of news.”

Hamm says she cares deeply about Israel and its reputation. Her clients, meanwhile, care deeply about getting back the hundreds of thousands of dollars they lost.

Binary options is a type of contract in which the payout depends entirely on the outcome of a yes or no proposition, according to the Securities and Exchange Commission. It could be “something as straightforward as whether the stock price of XYZ company will be above $9.36 per share at 2:30 p.m. on a particular day, or whether the price of silver will be above $33.40 per ounce at 11:17 a.m. on a particular day,” according to an SEC investor alert.In simplest terms, it’s a guessing game with an all-or-nothing payout.

Binary options companies continually prod clients like Steve to invest greater sums of money on a gamble. Then once clients appear to have “won,” these companies will often either prevent them from accessing their money, or manipulate the terms of the option until it becomes a loss.

Hamm, who is Orthodox and belongs to U. City Shul, said almost all binary options companies are based in Israel. Last month, the U.S. Commodity Futures Trading Commission lodged a civil complaint against an Israeli-American binary-options operator alleging that he stole more than $16 million from at least 8,000 victims, the majority of them in the United States, according to The Times of Israel.

Why are binary-options companies based in Israel?

Hamm said she attended a consumer-fraud convention in Florida and spoke with a former Department of Homeland Security official who worked in Israel and loved it. He told her that in Israel, however, “if no one is getting killed, it’s just not a priority. They deal with real problems, so to speak, like terrorism. And money loss is just not as big an issue until there is a lull in the attacks.”

A former binary-options scammer also told the Jewish Light that many of the digital platforms used for trading were created in Israel, a technology hub.

The Israeli government, which has faced increasing international criticism, is trying to push out the binary-options companies. Last month, the Knesset gave initial approval to a bill that would ban trading of the options, in addition to other regulations that have already been approved.

“I think it may be effective in making sure the companies do not operate on Israeli soil,” Hamm said.

A Times of Israel story last month quoted an Israeli state prosecutoras saying that at least 12 options companies and traders were under criminal investigation.

Shmuel Hauser, chairman of the Israel Securities Authority, said on an Israeli news show: “The [overseas] regulators tell us, ‘You have to do something, it’s like you’re turning a blind eye to this.’ I’m telling you, these binary options are a greater cause of anti-Semitism than any other factor. This is stoking anti-Semitism.”

Worse than a casino

Austin Smith made aliyah from New York in 2014 and studied at the Aish HaTorah yeshiva in Jerusalem for a couple of months. But the “yeshivish lifestyle wasn’t so much for me,” he said.

He moved to Tel Aviv and loved life in Israel, he said, but couldn’t find a job, in part because he didn’t speak Hebrew. A binary-options company hired him because he could speak English and would be able to lure customers from other parts of the world. He said people warned him that it was like working in a casino, but he took the job. He said he soon learned that it was worse than working in a gambling hall.

“The money comes in, but it never goes out,” Smith said.

Smith said he worked long hours and was lonely.In an interview with the Light, he said he changed his ways after a trip with a few friends to Tiberias in the northern part of Israel. He said he visited the grave of a 16th century kabbalist. He started crying and got a ride home from a haredi man who Smith said gave him a blessing: “You are going to do something special for the Jewish people.”

“A light bulb goes off, and I decided that I should go and help the people that have been defrauded,” said Smith, 33, the founder of Wealth Recovery International.

He and others at his company gather information about binary-options companies, which they present to lawyers and ask, “Here is what we’re able to provide, do you want to work with a client?”

Wealth Recovery offers attorneys information on clients who has been scammed and then charges the lawyers for its investigative work, Smith said. The attorneys then “work out their own deals with the clients.”

Hamm, who works as an in-house counsel for Wealth Recovery and also has a private practice in U. City,has helped negotiate settlements for 120 clients, said Smith. He first went by the name “Mitch Williams” when he started working in recovery because “we do get threats” from people he suspects are connected to binary-options companies.

He has heard the accusation that he is a profiteer, but says, “I’m entitled to make a living.” He argues that he fights for clients despite the threats.

Hamm said Wealth Recovery reached out to her because of her Midwest connections and experience in dealing with fraud. In addition, she also speaks Hebrew.

“The [binary-options] companies are Israeli,” Hamm said by phone from Israel. “I walk in and negotiate with opposing counsel, for example, and I have to speak Hebrew to do that.”

Steve Koel, 52, is a single father of two. He needed extra money two years ago because his son had started to have severe medical problems.

“We didn’t know if he was going to need multiple surgeries or long-term care,” said Koel, who lives in northern California. “I wasn’t necessarily prepared financially to deal with that, so I decided to explore some methods of possibly increasing my capital.”

He said he located Binary Book while surfing the web. After reviewing its site, he thought it looked “very legitimate.”

First, in September 2015, he made a $250 trade on the site. Then he received a call from a Binary Book employee who advised him to invest $2,500. He then learned that he had tripled his money bybuying binary options on stocks.

“I got my accounts credited for that amount,” said Koel, who owns a couple of franchise businesses.

The person Koel initially dealt with told him that he was sending him to more of a “VIP client’s broker.”

“The psychology behind it is, ‘You are now going to run with the big dogs. You are going to be my small fish, but I’m going to help you because of your son, and I’m going to bring you into this network of high rollers,’ ” Koel said.

Koel ultimately invested $1.5 million. He said he initially did just want to make extra money for his son’s care but then “greed took over.”

“A rational mind goes, ‘What are you thinking? How did this happen’? But there is no Cinderella story. It’s a process,” he said.  “You are seeing results on a web portal that is very thorough and very robust. They are very good at keeping in touch with you, putting you through training classes and talking with their compliance department about when you want to make withdrawals.”

Koel said he believes that none of his money was actually invested. He told a “VIP manager” that at the expiration of  trades, he wanted $1 million returned to his bank account.

That never happened. He noticed an irregularity in his Binary Book account and called to find out what had happened with some of the options he had purchased. He was told that “the Chinese were going to buy Yahoo and that was going to send the markets crashing, so we decided to exit your positions.”

Koel said he concluded that it would have been impossible for the markets to crash in such a scenario.

“It finally dawned on me that all the red flags I was seeing before were now real,” he said, noting that he never received a monthly financial statement like you would from a reputable brokerage firm. “I am thinking, ‘Oh my God. What did I just get involved with? What have I done to my family?’”

Koel said he received a call from Wealth Recovery informing him that he had been scammed.  (They had a list of Binary Book’s clients, Koel said.)

He first thought Wealth Recovery also was a scam. And, indeed, the Financial Industry Regulatory Authority, a nonprofit organization authorized by Congress to regulate brokerage firms and exchange markets, issued an investor alert in March urging binary-options investors to be wary of fraudulent pitches to help recoup losses.

But he decided to pay $100,000 to outside lawyers connected to him via Wealth Recovery.It turned out that Wealth Recovery was legitimate. After attorney’s fees and money that could not be recovered, he got back $1 million of his $1.5 million.

Earlier this year, Steve, the Kansas City minister, realized he had been part of a scam. He had tried to set up a meeting with a broker who said he was in New York but once Steve stopped sending money, the broker stopped responding.

Steve is now working with Wealth Recovery and lawyers to get his money back but hasn’t recovered any of it yet.