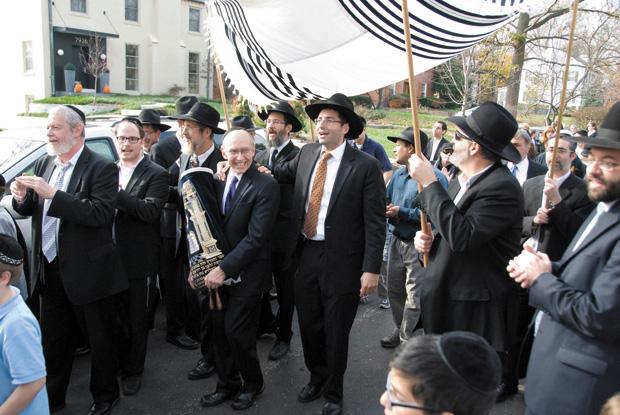 To judge from the dozens of people singing and dancing around him, one might assume that Stanley Jacobs was the center of attention. But if there is one thing Jacobs wants people to know about his story, it’s that he isn’t the main character in it.

“It’s about the Torah,” said the Normandy resident. “It’s about Hashem. It’s not about me.”

And the new Torah scroll being dedicated at U. City Shul was indeed the star of this Thanksgiving Day event. The holy document’s completion was celebrated by a festive procession down Gannon Avenue led by a police escort and three-piece band that brought onlookers onto front lawns just to observe.

Unfortunately, that learning has involved its share of sadness along the way. This Thanksgiving marked the second yahrzeit of his mother Goldie whom Jacobs had grown even closer to in the final years of her life. His father Morris had passed away when he was a child and the new Torah is dedicated in honor of both.

Jacobs’ family wasn’t wealthy but he describes them as rich in spirit.

“I didn’t know we didn’t have a lot because there was a lot of love,” he said. “My clothes were always clean. I had food in my stomach and I had love. That’s all a child really needs.”

And Goldie Jacobs always made sure their faith was a part of her son’s life. She worked hard to save just so he could have a tutor for his bar mitzvah, an event he recalls as the biggest day of her life.

Yet Jacobs said that while he maintained his faith, as the years wore on, he stopped moving up the “spiritual ladder.”

“I was always Jewish but I was on the road an awful lot and there weren’t always places to worship. I always kept the holidays,” he said. “[But] I wasn’t growing spiritually. I concentrated on my education and my job.”

Jacobs returned to St. Louis after decades away. As his mother’s health declined, he found himself praying more for guidance about the often stressful decisions he needed to make. In some sense, it marked a rebirth of an old relationship he already had with Hashem.

“He was always there,” Jacobs said. “He saved my life many times. Whenever I had a need for him, I prayed and he was there.”

Eventually, when his mother passed away, Jacobs contacted Rabbi Elazar Grunberger, then the spiritual leader of U. City Shul, to make funeral arrangements. The shul was the successor institution to Chesed Shel Emeth, the synagogue where Jacobs had been bar mitzvahed a half-century before. He was astonished at the attendance for his mother’s service.

“Everybody came out to the cemetery,” he said. “It was unbelievable. The whole community was there. They gave my mother a beautiful funeral.”

Grunberger began inviting Jacobs to stay at his home each week for shul. Jacobs found his spirituality beginning to grow again. It was further deepened by a brush with his own mortality earlier this year after chest pains necessitated a visit to the hospital. He said it turned out to be merely an infection of the breastbone but a severe reaction to the medication made the incident a harrowing experience.

“My pulse nearly went to zero,” remembered Jacobs. “I blacked out. They told me the next day, you nearly met your maker.”

In very a different sense, Jacobs did exactly that, spending the better part of the next week on bed rest where he said he had a chance to communicate more closely with a higher power and think about the direction of his life. He said he now believes it could all have been part of a greater plan.

“Hashem had me where he wanted me,” he would tell the congregation during his Thanksgiving remarks. “I couldn’t get out of that bed.”

By the time he did, he had decided to create a new Torah created using money he had originally saved up for his mother and himself to travel.

‘God into our midst’

The process of putting together a Torah is not a rapid one. Rabbi Menachem Tendler said such a project can consume as much as a couple of years and cost $30 to $60,000 in some instances.

In this case, as many as 16 different samples were reviewed before selecting one that fit the congregation’s preferences.

“The whole shul is based around Torah,” said Tendler, who succeeded Grunberger upon the latter’s departure for Israel late last year. “We are obligated to live by its word and we do our best to live by its word. It’s our manual for life. When something is so meaningful and you live your life and dedicate your life as much as possible to Hashem, there is no greater joy for a person.”

The shul once had as many as 18 Torahs but over time most had become worn with letters rubbing off, rendering the scrolls unusable for service. Some were either given away or sent to a New York-based organization that refurbishes them under a unique arrangement in which the congregation trades in several unusable scrolls and receives one of them back refurbished at no charge. The other non-kosher scrolls are either repaired or sent to the Israeli Defense Forces for use in the field.

“It didn’t cost the shul anything,” Tendler said. “They refurbished three Torahs. Two belonged to them and one came back to the shul.”

The congregation now has three kosher scrolls out of seven total Torahs, some of which have backgrounds dating to the Holocaust era. In fact, one is done in two completely separate styles, which the rabbi said indicated it was probably started before or during the Shoah but work was interrupted and completed later by another scribe.

Tendler said the synagogue is working to eventually repair the others as well. The refurbished Torah is dedicated in honor of Jacobs’ uncle and grandmother, Milford and Esther Katofsky.

The new Torah was done by a sofer in Israel but dozens of letters were left in outline so that individual members of the community could fill them in at Tendler’s home. Each one handed the quill to local rabbi Avi Bloch, spiritually appointing him as a “messenger” to complete the holy task for them.

During his remarks, Tendler told the assembled well-wishers that the most important thing was to give their attention to the Torah because of its content, not just because it is expensive or beautiful, adjectives which could apply just as easily to secular objects.

“Granted, a Torah, in and of itself, has unbelievable holiness but it is not complete if we do not learn from it,” he said. “If we don’t live our lives by its words, sadly, it will be but a trophy.”

Others noted the joy of the Thanksgiving celebration.

“It’s a big day for the community,” said synagogue president David Rich as he trailed the crowd back to a reception at the shul. “To have a new Sefer Torah is like bringing God into our midst again and again.”

As for Jacobs himself, the good news continues. Just days before the Torah dedication, he asked the love of his life, whom he began seeing this summer, to marry him. He popped the big question before a performance at the St. Louis Symphony Orchestra where Jacobs sang his proposal using lyrics he’d spent more than a week composing.

The pair will be married before Passover.

Grunberger, now rabbi emeritus at the U. City Shul, made a special trip to St. Louis for the event. He said that Jacobs’ tale shows how the Torah can be “a tree of life for all those who cling to it.”