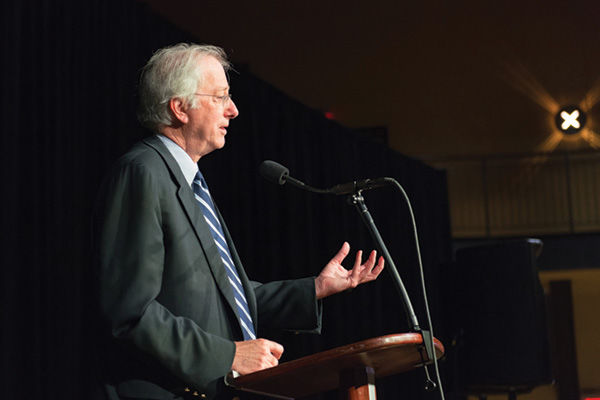 President Donald Trump faces “unprecedented challenges” in the volatile Middle East, says Dennis Ross, who has served in key Middle East negotiating roles under Presidents George H.W. Bush and Bill Clinton, and as a special adviser for the Persian Gulf and Southwest Asia (which includes Iran) to former Secretary of State Hillary Clinton.

Ross is also the author of several major books on the Middle East, including “The Missing Peace,” about the attempt to achieve a two-state solution between Israel and the Palestinians, and most recently “Doomed to Succeed:  The U.S.-Israel Relationship from Truman to Obama,” which was a winner of the National Jewish Book Award for history.

The Jewish Light sat down for an interview with Ross just before his talk before a packed house estimated at more than 700 people by event organizers.

In view of the bitter reaction in Israel to the failure of the United States to veto an anti-Israel U.N. resolution and the highly critical speech by outgoing Secretary of State John Kerry, is the two-state solution essentially dead?

No, it is not completely dead as yet, but at this time neither Israel nor the Palestinians are willing negotiating partners. [Israeli Prime Minister Benjamin] Netanyahu still says he favors “two states for two peoples” but seems unwilling to resume negotiations at this time. [Palestinian Authority President Mahmoud] Abbas is in a too-weak a position to effectively negotiate. Abbas is also facing discussion on who will be his successor.

President Barack Obama had a rocky relationship with Netanyahu, culminating with the non-veto of the U.N.  Security Council resolution, which was highly critical of Israel.  How do you think historians will evaluate his record on relations with Israel?

Obama was supportive of Israel’s security needs during his terms of office. He deserves credit for his support of military-to-military cooperation. But his record is mixed because of his tendency to be only critical of Israel, on the settlements, etc., while giving the Palestinians a free pass and never expressing criticism for their failure to live up to their agreements to stop incitement. Because the Palestinians were given a pass, they continued to play the card of being the victims of injustice at the hands of the Israelis. Obama, like some other past presidents, acted as if he could gain favor among Arab states by being critical of Israel and distancing the U.S. from being strongly supportive of Israel.

Has that approach worked among past presidents?

Every president from Harry Truman to Barack Obama has faced at least one major crisis in the Middle East. Even Truman, who recognized Israel 11 minutes after it proclaimed its independence, placed an arms embargo of Israel during its War of Independence. Perhaps the worst relationship was that of Eisenhower, who believed that Truman gave in to Jewish pressures to recognize Israel, and he did not want any Jewish influence on his policies.

When President John F. Kennedy became the first president to supply arms to Israel, his secretary of state, Dean Rusk, worried that it would anger Saudi Arabia. But when Rusk met the Saudi king, the subject was not brought up.

What kind of relationship between the United States and Israel do you expect from a Donald Trump administration?

Time will tell, but what is clear is that Trump faces a huge array of issues across the region, none of which has an easy solution. Take Syria, for example: 500,000 Syrians killed; 11 million displaced from their homes. Russia has intervened in a major way that has kept [Syrian President Bashar] Assad in power.

There is also the ongoing battle against ISIS and other extremist groups in the region. There are at least 160 militias battling in Syria. If that were not enough, Russia has abetted Iran, which is now a major player in the region.

How does Israel fit into this equation?

Israel has been called the “first Jewish Sunni state” because a tacit alliance has developed between Israel and Arab states like Saudi Arabia, Egypt, Jordan and the Gulf States. The leaders of those nations know they do not have to fear an invasion by Israel, but share Israel’s security concerns about Syria and Iran.

A majority of the Israeli body politic no longer believes Israel can get anything of value by negotiating with the Palestinians. Until that changes, I am not optimistic that any new initiatives will occur.

Trump has indicated that his son-in-law Jared Kushner,  who has an office in the White House, could play a role in negotiating a deal between Israel and the Palestinians. Do you know Kushner and do you think he has a chance of succeeding?

I do not know Kushner, but clearly he has the attention of Trump and his chances for success are as good as anyone else’s at this point. My hope is that the Trump administration won’t get frustrated and wash its hands of the peace process. We will not walk away from Israel because we share common values with Israel as a pillar of democracy in that troubled region.