The Tamarens have art in their genes 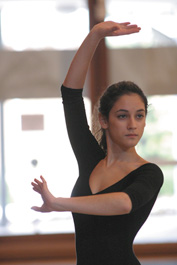 The Tamarens have art in their genes

BY MIKE SHERWIN, SPECIAL TO THE JEWISH LIGHT

Karen Tamaren always had a love of the arts, but besides dabbling with piano and singing, she never pursued the arts too seriously.

But as a mother, Tamaren, of Ladue, decided it was important to share her appreciation of the arts and to make it a priority to give her kids plenty of opportunities to learn to express themselves artistically.

Tamaren said her philosophy was simple: “I wanted my kids, just for fun, to learn how to play some sports and some music.”

Carlye, 17, became involved in gymnastics at an early age, but it was not until a statewide competition in seventh grade that she found her true calling.

“One day Carlye finished her dance routine on the balance beam,” Tamaren said. “And she popped off and said, ‘Mom I think I’m a dancer.’ I said, ‘Well, you’ll have to break the news to your coach.'”

Carlye said most dancers begin at an early age.

“Whenever I tell people that I started dancing when I was 13, they say, ‘What? Are you kidding me.'”

By eighth grade, Carlye said she decided dance was something she wanted to pursue seriously. “I said to myself, ‘All right, if I want to do this I’m going to have to do it a lot.’ So I trained hard for a year and tried out the next year.”

The training paid off. Despite the late start with dance, Carlye quickly took off, earning a spot in the Muny’s production of Cinderella in 2003.

Outside of COCA, Carlye also participates in community theater groups in the summer. After landing the role of Tiger Lily in Spotlight Productions’ presentation of Peter Pan, Carlye got a big surprise when she was nominated for and won a 2005 “Arts for Life” award for “Best Featured Dancer.”

“The awards are kind of like the Tony awards for community theater in the St. Louis area. I went into it not really knowing how big of a deal it was,” Carlye said. “It was a black tie awards dinner, and people were crying when they won the awards. It was a really big deal.”

Despite the accolades, Carlye is modest about her accomplishments, and says what she most loves about dancing is the thrill of performing on stage.

“Being up there is like a whole other world,” she said. “It’s really exhilarating and a lot like acting, because you take on another role in dance, which is fun because I also really love acting.”

Looking toward the future, Carlye said she would like to audition for conservatories like Julliard or SUNY-Purchase, but she is also looking for colleges with strong programs in dance and academics.

Carlye’s brother Lucas, 13, shares his sister’s love of the arts, but has followed a different path, focusing on music.

After studying piano from Washington University piano and voice teacher No ël Prince (along with his three siblings), Lucas began studying percussion, and his current favorite instrument, the guitar.

“A couple of my friends showed me the classic rock genre,” Lucas said. “And I saw the abilities that all these people had, and I found I wanted to do that.”

Although his mother says she loves to see her son so interested in learning and writing music, she jokes, “This is almost a nightmare for me because he used to play beautiful piano music and now he plays [she emulates noise of rock guitar], and I have to yell, ‘Shut the door, turn down the music.'”

But his father says Lucas’ musical tastes fit right in for him. “I always loved things like Crosby Stills Nash and Young, Led Zeppelin and Hendrix.”

Lucas turned his love of music into his service project for his bar mitzvah earlier this year when he set up a concert to benefit Darfur, the embattled region in Western Sudan.

“I really wanted to do something to help out, because it kind of turned on me how underprivileged they are out there,” Lucas said.

Lucas and his guitar teacher performed at the Lucas School House in Soulard, along with a couple of other bands.

Carlye drew a logo with an eagle clutching a guitar for the event and Lucas printed T-shirts for the event, called “Playing for Justice.”

But using their artistic talents for public service wasn’t a new thing for the Tamarens.

The twins, Hannah and LIzzie, 15, used their singing talents (along with Carlye) to record a compact disc of children’s songs. The family bought Walkmans and passed them out with the CDs to patients at Children’s Hospital.

Lizzie, who is the only freshman at Ladue High School to make it into show choir, said she feels right at home as its youngest member.

“The people on show choir seem to have really big personalities, and are still really well rounded,” she said. “I love musicals, so it’s fun to be around other people who like the same thing.”

Just like her siblings, Hannah has varied interests (including singing and diving), but her main focus is clear. “It’s pretty much all gymnastics, all the time.”

Hannah has competed in state and national competitions, and took home a second-place award in a national judges’ cup competition last year.

She said she spends about 20 hours each week practicing.

Despite their accomplishments, the Tamarens remain modest.

But the parents are proud that their children have had the chance to be exposed to the arts, and that they have all developed their own love for the arts they practice.

Their father, Allen, said, “Karen and I are great supporters of the arts. We believe music, the arts and sports have the capacity to round out our children and help them be more in touch with their creative energies and be around other creative people.”

“We have gently guided and encouraged them to follow their gut in the pursuit of these activities. Fortunately they have all responded.”