The good, the bad and the absolutely embarrassing 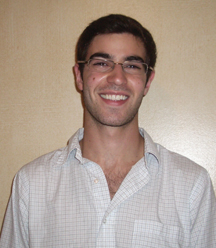 The cost of a bar or bat mitzvah . . . substantial. The memories from that special day . . . priceless.

We asked seven young adults from the St. Louis area, each of whom celebrated their bar or bat mitzvahs several years ago, to recall what memory or memories stand out long after the day was over. Here’s what they had to say:

Many 13-year-olds marvel at the money and other gifts they receive at their bar mitzvah. Adam Brandvein, marveled at something more heartfelt, a memory that could last forever.

Brandvein says he received his favorite gift on Dec. 14, 2002 when he was surrounded by all of his family and friends.

“I felt important because all the attention was around me,” he said.

Brandvein’s cousins came to St. Louis from Philadelphia, while his camp friends traveled from Detroit, Cincinnati and other parts of the country to celebrate with him.

“I remember it being a lot of fun because I don’t get to see them very often,” Brandvein said. “I felt special that they made that trip just to see my bar mitzvah.”

Brandvein realized how special he really felt when the weekend festivities were over and his loved ones and friends returned home.

“The Sunday after everybody left it all hit me that it was all over,” he said. “I remember being sad and upset that I wouldn’t have guests staying at my house.”

Caroline Katzman vividly recalls standing in front of her friends who were seated in the congregation for her bat miztvah, knowing she would soon have to say goodbye to them. She was switching from Ladue Middle School to John Burroughs School, and she was afraid her friendships would never be the same.

“It was a really big transition for me,” Katzman said. “The rabbis always preach about how this is your transition from a girl to a woman, and for me, it was very much the same.”

This transition was very traumatic to the 13-year-old Katzman.

“I cried at the end,” she said. “I was so scared and nervous to go to school. I felt like I had such great friends, and I just didn’t want to start over.”

In retrospect, she says her bat mitzvah helped her mature and accept the drastic change. Rather than seeing it as an end to her past, she realizes it was a beginning to her future and a continuance of old friendships.

“I made a lot of new friends, and the people I met in those first few days are my closest friends now,” she said. “It ended up being a good thing.”

She also continues to keep in touch with her old Ladue friends to this day. Make new friends and keep the old is an expression Katzman thinks of when she remembers her bat mitzvah.

Abigail Kohn said she loved the Torah portion at her bat mitzvah because it was so applicable to her life at the time. When she chanted her piece on June 5, 2004 at United Hebrew Congregation, her voice glided over the double meaning and gave a secret plea to her friends watching.

“My portion explained about friendship, and that a lot of people can be disingenuous,” she said. “But you have to rise above it and become stronger.”

Kohn was in a difficult stage of her life where she struggled with untrue friendships and crumbling relationships with some of the girls at her school.

“I was in middle school going through that mean girl phase,” she said.

Kohn explained her bat mitzvah helped her realize these problems and therefore marked an important turning point in her life.

“It taught me what to value in a friend and in life,” she said. “I learned how to differentiate a true friend from a social climber.”

As a result, Kohn says she now has wonderful and sincere relationships that will last her forever.

Most bar and bat mitzvahs signify a transition from childhood to adulthood. Carlye Tamaren’s bat mitzvah meant womanhood and something more. The moment she stood on the bima at Central Reform Congregation her life changed forever. Eight years later, she is still reminded of that one special day on Oct. 5, 2002.

A soon-to-be junior at the University of Michigan, Tamaren is one of 80 performers in the college’s competitive musical theater program where she dances, sings and acts. She says she owes her success in the program and many other accomplishments to her bat mitzvah, which was when she discovered her passion for theater.

Tamaren said her bat mitzvah taught her how to apply acting to real life. She was able to lead a successful service that transitioned her into a Jewish woman and an up-and-coming Jewish star.

“I will never forget what it felt like standing at the bima and having the attention of the whole congregation and them actually caring what I had to say,” she said.

If Max Weinstein could change one thing from his bar mitzvah party, it would be the photographer.

On the night of May 14, 2005, Max enjoyed dancing, eating, socializing and other bar mitzvah party festivities. Unfortunately, however, he would never have pictures of these candid moments.

“My mother asked the photographer to take pictures of every table, and for some reason, he took pictures of the tables before everyone got there,” Max said. “All of the tables were the same except for a different center piece.”

As a result, the only visual memories Max and his family would have of the party were of the empty tables. Though they may have been decorated with exceptional taste, it would not be enough. Luckily, however, Max’s memories still provide him with proof of his party.

“I remember parts and my family tells stories,” he said. “I remember being with my cousins from out of town who I don’t get to see very often.”

Max said some one of his finest memories was everyone celebrating him becoming a man in the Jewish faith.

Emily Rosen’s bat mitzvah marked a very important turning point in her life. She became a role model to both younger and older female relatives because she was the first female in her entire family to celebrate a bat mitzvah.

Though her male relatives had bar mitzvahs, her mother, aunts and older female cousins never experienced this coming-of-age ceremony. As a result, Rosen warmly welcomed her opportunity to shine.

“I felt really proud of myself to complete this goal that no one else in my family got to complete,” she said. “I felt special to be the first.”

And she was special indeed. So special that her cousins and younger sister mimicked her ways and soon had bat mitzvahs of their own.

Rosen is very pleased with these results, and she honors being a celebrated Jewish woman.

“I remember having a lot of fun being on stage and becoming part of the bat mitzvah club,” she said with a wide smile on her face.

One of Caleb Liberman’s clearest memories from his bar mitzvah is a party favor and an embarrassing emotion he would like to forget.

“I made my dad promise not to do a video or T-shirts because that stuff is embarrassing,” Liberman said.

His father, however, took it upon himself to add a bit of humor, creativity and flair to the party. The result was the attractive Caleb-face T-shirt that party-goers quickly donned in exchange for their elegant attire. Liberman was not pleased.

“Who likes to have a picture of themselves and have everybody wear it?” he joked.

To this day, Liberman’s friends wear the shirt, which is a constant reminder to him of his profound bar mitzvah party embarrassment.