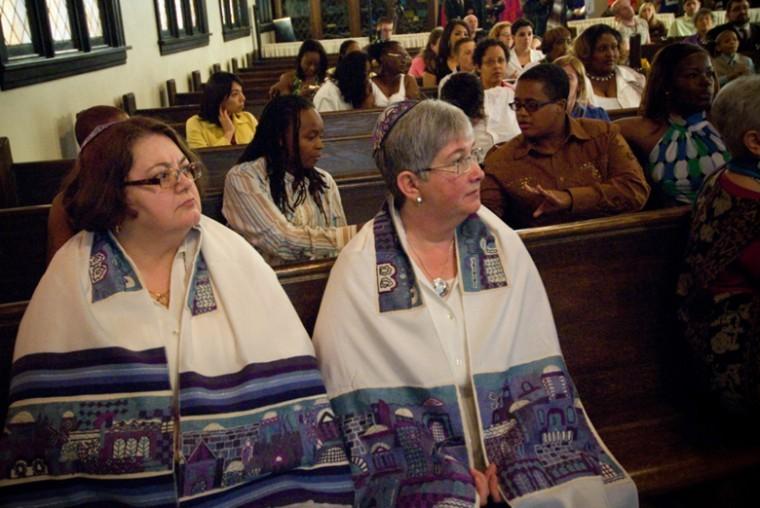 Sherie Schild and Janice Barrier wait with 16 other couples from St. Louis to be married during a trip to Iowa in 2009. The couple's wedding was officiated by Rabbi Susan Talve of Central Reform Congregation. Photo: Kristi Foster

By David Baugher , Special to the Jewish Light

As Barry Rosenberg nurses a cup of coffee at a local café, the President and CEO of the Jewish Federation of Greater St. Louis paints a picture of what many once thought was a typical Jewish home.

“Most of our institutions were designed to serve what you would call the classic Jewish family constellation, two born Jews who are married, probably their first marriage, with one or more children living at home or in college,” he said.

Reality, however, shattered that conventional wisdom.

“In the 2000-2001 population study, we found that that constellation only represented 18 percent of Jewish households,” Rosenberg added.

Today’s Jewish community is more diverse, more far-flung, less affiliated and harder to define than ever before. It’s a fact that is putting pressure on everything from synagogue membership to Jewish institutional models coast-to-coast as the Jewish establishment struggles to find ways to adapt to a new, more mobile world in which hard demographic numbers are scarce and involvement in the organized Jewish community is more personalized, and far more optional, than in years past.

The decade-old National Jewish Population Survey (NJPS) estimated there were 5.2 million Jews in the country, about 4.3 million of whom were “Jewishly engaged” with others having a looser connection to the community. Those Jews represented about 2.9 million households but those households contained about 6.7 million members, highlighting a dramatically higher rate of intermarriage among community members than documented in previous studies. In fact, nearly a quarter of people in Jewish households weren’t Jewish.

More than four decades ago, only 13 percent of Jews married out of their faith. The most recent NJPS found that rate had jumped to almost half. Rosenberg said intermarriage has been an indicator of the acceptance and success of the Jewish community whose members are now freer to marry whomever they wish.

“As a result of interfaith marriage and blended families, it may be that the number of people within the orbit of the community is actually growing,” he said.

Whether the community itself is growing is a matter of some debate. The NJPS found Jews marry later, have fewer children and are disproportionately older than the American population at large, leading many to believe that Jews are both a shrinking and aging group.

“Even though the Jewish population of the United States has remained relatively constant over the last 20 years, we’re in for a decline because Jewish fertility is quite low and we’re an older population,” said Ira Sheskin, professor of geography and director of the Jewish Demography Project at the University of Miami.

But not everyone agrees with that assessment, underscoring some of the controversy and dissent that accompanied the release of the NJPS findings.

“I think those assumptions are incorrect,” said Leonard Saxe, director of the Cohen Center for Modern Jewish Studies at Brandeis University, speaking of the idea of a shrinking Jewish community. “What we think has happened is that there has been substantial Jewish immigration to the United States from the former Soviet Union in the ‘90s in particular but now from Latin America, Israel and other places.”

Saxe said he believes the Jewish population has grown substantially over the past two decades when you include both those who are Jewish and those raising Jewish children as well as the inclusion of patrilineal decent in some parts of the Jewish community.

Saxe also feels Jewish identity is becoming stronger too, largely due to billions of dollars invested in Jewish education starting in the 1990s as a result of worries over rising intermarriage rates. Programs like Birthright Israel have bolstered awareness as well, he said, sending thousands of Jews to the Middle East to experience Israel for themselves.

“These young adults come back and they create Jewish families,” he said. “They have strengthened ties to Israel and to their own Jewish identity.”

The role of women

But just what is that Jewish identity? Growing or shrinking, one thing everyone seems to agree on is that the Jewish community doesn’t look the same as it did a few decades ago as a new, more diverse set of faces come to the fore.

One difference is the changing role of women who have come into the spotlight over the past few decades in Jewish leadership. Females were admitted as rabbis in the Reform movement in 1972 and in the Conservative movement in 1985.

While Orthodoxy still does not ordain women, they have been increasingly prominent in the community taking over more and more leadership roles.

Local Orthodox congregation Bais Abraham can speak to that. At the beginning of this year after a quarter century at the institution, Phyllis Shapiro was named its first female president.

Stressing that she could only speak regarding changes in the Modern Orthodox movement, she said there is a new sense among some Orthodox women that began growing in recent years with a trend toward post-high school Jewish education.

“This change began with the explosion of serious learning for women in Israel,” she said. “As women got more educated Jewishly, their roles in schools, synagogues and the community also began shifting. I think we’re just seeing the beginnings of this shift.”

She feels that ethos was transferred to American Orthodox women who often interacted with their Israeli counterparts as young adults while traveling to Israel.

“Now we’re seeing the effect of this in synagogues, day schools and the community,” she said.

That’s been playing out at the national level within the Orthodox Movement where last year a liberal rabbis group, the International Rabbinic Fellowship, issued a statement encouraging greater inclusion of women in everything from the teaching of Torah to the assumption of lay leader roles.

Rabbi Hyim Shafner, head of Shapiro’s congregation, was a part of the IRF’s national leadership team.

“As with any change, it will make some people uncomfortable but it’s all based on knowledge and learning,” Shapiro said. “There’s no way to go back or stand still.”

Repps Hudson is another face of the increasing diversity in the Jewish community.

“Some people would say to me, that doesn’t sound like a Jewish name,” he said. “I’d say well, it is because I’m Jewish.”

He wasn’t always. Raised Episcopalian in rural Missouri, he lost his faith during adolescence. He went on to fight in Vietnam and came back to a career in journalism.

“What made a difference for me-where I began to get interested in God-was when my daughter was born,” he said. “I think that’s what started me thinking about some of the bigger picture issues that one thinks about as you get older.”

During the 1980s he was posted by his newspaper to Israel and began absorbing the culture.

“I came to Judaism intellectually,” he said. “I didn’t come to it so much with my heart as with my head.”

After moving to St. Louis in 1985, he converted, attending first at a Reconstructionist minyan and then later moving to Central Reform Congregation and finally Brith Sholom Kneseth Israel. He notes that Judaism can be a difficult faith to join but he thinks that’s a positive thing.

“Judaism requires a lot of you, which I think is good,” he said. “I believe in this idea of tikkun olam, repairing the world. Those are really important concepts.”

‘A part of the greater community’

There have been changes in family structure as well. The archetypical Jewish family Rosenberg mentioned hasn’t disappeared but it has given way to other shapes and sizes of Jewish families.

Sherie Schild certainly feels that she’s seen changes in the community over time.

“In the early ’80s when I first came out, the Jewish faith was just not a welcoming community,” she said. “I felt excluded. I felt invisible and that’s because I knew I was different.”

Schild is gay and though she grew up Jewish it took some time for the now-58-year-old to feel welcomed back into the religion. That experience happened when she and her partner Janice Barrier were looking at joining a church. While they were there, they found a small Jewish synagogue that was renting space from the organization.

“She stood up at this meeting and one of the first things that she said was that we have LGBT members in our congregation and if you are not comfortable with this you need to get up right now and leave,” said Schild. “Jan and I looked at each other in shock.”

Talve would later marry the pair in Iowa in 2009.

But Schild said CRC is no longer an outpost in the wilderness. As society has grown more accepting of homosexuality, so has the Jewish community. She recalled back in the ’90s seeing CRC as the only Jewish congregation marching in the local pride parade.

Barrier, who grew up Christian, said she felt ostracized by her own faith and has since become a Jew by choice. She noted that many gay chavurot and minyans formed across the country largely because people in them were not accepted by other Jews.

“Here in St. Louis, though we do have a chavurah, we can now be a part of many Reform and Conservative temples and not limited exclusively to just the gay and lesbian community,” she said.

“It’s really nice that we can be a part of the greater community,” Schild added. “That’s a big change.”

About Can We Talk?

• Getting the next generation involved in the Jewish

community – is it possible?

• With many congregants coming only for High Holidays services or simchas, synagogues face challenges in building vibrant Jewish life.

What do you think?

Share your thoughts on our ‘Can We Talk?’ topic of ‘The Changing St. Louis Jewish Community’ in a letter to the editor or a commentary to [email protected] or comment on Facebook.com/stljewishlight. For more information, call 314-743-3665.