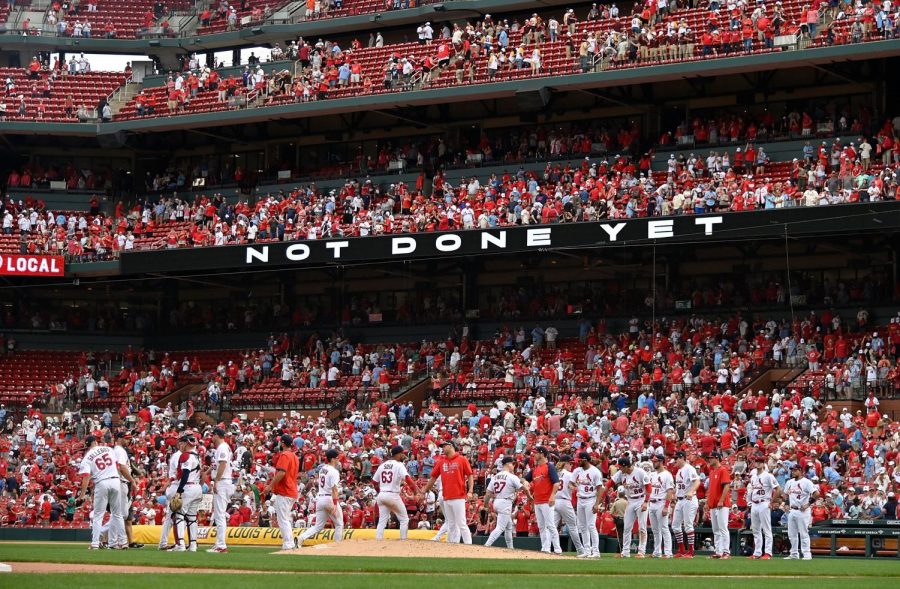 Sixteen days ago, Brewers’ pinch hitter Daniel Vogelbach launched a bases-loaded 1-0 pitch from Alex Reyes into the American Family Center ether, handing a series win to Milwaukee and dropping the St. Louis Cardinals to 69-66. Well, you could say the two teams live in a different world these days.

Last night, it was the Cardinals who struck early and late to defeat Milwaukee 5-2, pushing their record to 80-69. That’s right, the Cards have gone 11-3 since that debilitating loss, climbing over the Cincinnati Reds in the division as well as the wildcard standings, where they currently hold a three-game lead. A date with the Los Angeles Dodgers awaits this team, whether the playoffs started tonight or in two weeks.

In the game of baseball, a team isn’t done until the math informs them that they are. For weeks, the Cardinals slept around the outskirts of playoff contention, sneaking into the wildcard party only to be tossed out after a few more games. Leave to the team who shares a street with a team called the Blues to make things extra interesting, keeping fans waiting for a real pulse. That’s arrived with a nine-game winning streak that has included a series win over the Reds and sweeps of the New York Mets (formerly a wildcard contender) and San Diego (formerly a wildcard contender).

Right when the National League figured St. Louis was going to sleep for the fall, they arose from their slumber with thunderous notoriety. Perhaps visiting teams should pay more attention to those 11 flags waving vicariously in the wind when they take the field at Busch Stadium. Whether fans or local writers like it or not, St. Louis rarely makes it look easy-both of their last two World Series wins involved highly improbable September runs-but winning baseball cures a lot of bad feelings.

For example, how often have we heard Mike Shildt is a bad manager since the winning streak took off? Rarely.

How much extra fuss was made over the dugout dispute between Yadier Molina and the recently released Daniel Ponce de Leon? Little, even if fans attach it to the release of the pitcher more than the pitcher’s 2021 performance.

What about Molina hitting in the middle of the lineup with a sub-.700 OPS? Somewhat, but less after he drives in two key runs during Monday’s win.

Are we still mad about Jon Lester and JA Happ being the only midseason acquisitions by John Mozeliak? No, because they have improbably pitched a lot better than their pre-St. Louis’ arrival would have suggested.

Not that all of these issues are essentially squashed after two weeks of great baseball, but the chatter and overall noise around them does die down due to one thing taking place: Winning.

What’s extra impressive is that the Cardinals aren’t beating scrubs recently. The Padres may be just 76-73, but they did eliminate St. Louis last year in the playoffs and are stocked with loads of young talent. Same goes for the high-priced-yet-underperforming Mets, who are in need of new leadership next year. The Reds gave the Cards all kinds of trouble for weeks, before St. Louis handled them in their last showdown ten days ago.

The Cardinals have pulled this off with little-to-none upgrade on offense, relying on big performances from Tyler O’Neill, Paul Goldschmidt, and Nolan Arenado: players that were assembled in the offseason to be difference makers. Out-of-nowhere work from Edmundo Sosa shouldn’t be forgotten, nor would solid seasons from Dylan Carlson, Tommy Edman, and polarizing outfielder Harrison Bader. This kind of comeback requires every hand on deck, especially the new faces down in the bullpen.

What the biggest takeaway should be-and one that I will download myself again-is that there are 162 games for a reason. Unlike football and hockey, this game is an extremely long and zig-zagging ride that can frustrate and lift up millions all inside the same 24-hour period. A couple of weeks ago, with such a tough schedule laying ahead of them, it would have been nuts to say the Cardinals could begin play on Sept. 21 with 80 wins. There are 13 games left, which means 90 wins isn’t out of the frame of reality.

Sixteen days ago, Cardinal Nation — and most of the local writers — had to think this season was heading downhill. Today, they stand comfortably in a wildcard spot, having just swept two teams in a row that were previously ahead of them. Tonight, they attempt to win a series from Milwaukee for the first time since May 13.

Former Cardinal pitcher Joaquin Andujar was right. In this game, as in life, you just never know.