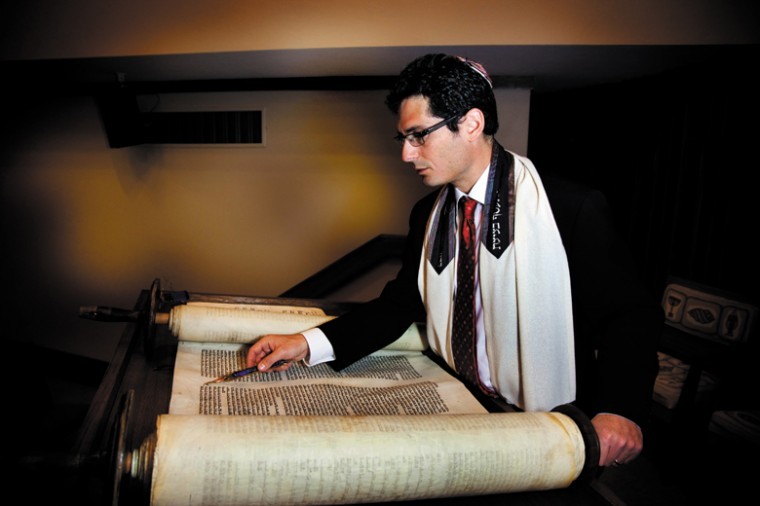 Temple Emanuel's Rabbi Justin Kerber is pictured with Holocaust Memorial Scroll No 420. The congregation has welcomed the Torah, which used to be housed at Congregation Kol Am. Kol Am disbanded earlier this year. Photo: Kristi Foster

It was the day before Rosh Hashanah when Norm Berkowitz finally felt that Congregation Kol Am could be forced to disband.

“I got a piece of concrete information where I knew then that we were not going to make it,” reflected Berkowitz, who, as president, would be delivering traditional holiday remarks the next morning to the congregation he’d been a member of for nearly a quarter century. “I really focused on the Torah because it survived and I guess survival was on my mind at that point.”

As Berkowitz knew, Kol Am’s Torah had indeed survived far greater traumas than a synagogue closure. One of more than 1,500 “Holocaust Torahs,” it had managed to make it through the horrors of occupied Europe to be discovered later in a Czechoslovakian basement. Those scrolls are now lent out to congregations around the world, which is how Kol Am came to acquire it.

But it turns out this particular loaned Torah will now stay in St. Louis where Berkowitz and dozens of former Kol Am members will continue see it regularly thanks to Temple Emanuel. The temple has gained permission from the London-based Czech Memorial Scrolls Trust to keep the holy object after the closure of the nearby synagogue, which was shuttered earlier this year due to fiscal challenges.

“It’s a great honor and privilege to be able to take care of this survivor of so much,” said Charles Lowenhaupt, president of Temple Emanuel. “We’re all stewards of that Torah.”

Indeed, it will be stewarded in part by many of the same people who were a key part of Kol Am. Berkowitz estimates that 32 to 40 of the defunct synagogue’s approximately 60 families may have made the journey to Temple Emanuel.

“They’re really happy,” Berkowitz said. “The kids in the religious school seem to really enjoy it here. Their parents are happy. Us older guys are happy because we get to see each other. They’ve been so welcoming to us.”

Beth Knight, Berkowitz’s predecessor as president of the Kol Am and a member of the former synagogue for a decade, was one of those turning to Temple Emanuel for membership. But Knight has done far more than simply express joy at the Torah’s continued presence. After arriving at Temple Emanuel, she went on to research the scroll, which originated in the small Czech town of Trebon.

With help from Yad Vashem and some decades-old historical detective work by a member of a British congregation that had another Trebon Torah, she was able to piece together some of the scroll’s past as well as locate the Holocaust-era “transport list” for 76 Jews both inside the town and in its surrounding vicinity.

Knight said the Torah’s former congregants were deported to Terezin in 1942 and from there, to Auschwitz, Treblinka and other sites. Unfortunately, their story had an ending that was all too representative of the mass slaughter, which defined the age.

“There was no one who survived,” Knight said.

Knight said it was humbling to do this kind of research, which allowed her to apply the names of individuals to the staggering numbers of dead, thereby personalizing the tragedy.

“We should really appreciate the sacrifice these people made,” she said. “It speaks to survival. Yes, they died but in spite of that, the Torah goes on.”

She also said this particular scroll has deep meaning for her. It was the only one Kol Am ever possessed.

“My children read from this Torah for their bar and bat mitzvahs,” she said. “I look at that Torah and think it’s a much more personal experience to me now because I know the names of those people who used it before I did.”

The rest of the congregation will get to know those names as well. As part of the agreement with the trust that owns the scroll at least one service must be dedicated to recognizing the names of the Torah’s original users who lost their lives in the Shoah. Temple Emanuel’s rabbi Justin Kerber said that will happen though the exact nature of the observance hasn’t been worked out.

“We’re figuring out the best way to honor these people,” he said. “It’s very likely we will be reading these lists in their entirety at certain points during the year.”

Kerber said he’s pleased that so many former Kol Am members were able to find a home with his synagogue.

“They were very clear that they liked our small size, our warm and welcoming vibe, the way they were made to feel comfortable,” he said. “We heard that over and over again.”

He’s glad the Holocaust Torah found a home as well. Kerber said the congregation possesses five other scrolls, most or all of them more than a century old. Still, he noted that their latest addition, which is due to be introduced to the congregation during an Oct. 21 Simcha Torah celebration, is unique. Though relatively large it’s very light due to the thinness of the parchment, he said.

The calligraphy is also of interest. Kerber calls it “spectacular.”

“I’ve never seen anything quite like it,” said the rabbi who put the scroll’s age at between 150 and 200 years. “I’m told by the sofer that examined it that it’s a mystical style, a Kabbalistic script that is associated with the Maharal of Prague, Rabbi Judah Loew. He is the one associated with the legend of the golem. It’s not quite that old but it apparently was written by someone who was influenced by him.”

October’s formal rededication will involve unrolling the entire Torah in the sanctuary. Kerber said interfaith leaders from the local Christian and Muslim communities have been invited to witness the event.

He said the scroll would be put into regular circulation for services with the others.

“One of the things I have learned from this scroll and the members who helped bring it is that Torah scrolls love to be used,” he said. “This one was examined by a sofer (Torah scribe) a couple of years back who was very excited by the great condition in which he found it and he attributed that to its regular use.”

Berkowitz said that it makes him feel good to know that most of the former congregation remains together and that they have been reunited with the scroll they used for so many worship services.