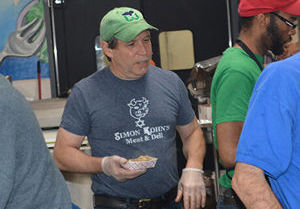 Lenny Kohn, co-owner of Kohn’s Kosher Deli, has been busy. That’s not only because of all the Jewish holidays in September but also because the St. Louis Cardinals’ regular season is nearing its end as the Blues are preparing to take the ice.

(With the way the Cardinals have been playing lately, however, Kohn may be serving kosher dogs at Busch Stadium through October.)

Given all that activity, the Jewish Light thought it would be a good time to check in with Kohn and find out how he and his kosher restaurant were doing.

How has the Cardinals season been for you?

We expected because of the smaller crowds with the pandemic for it to be a little bit slower at the beginning of the year. Because of the economic situation of people not working in many industries, the stadium itself did not have all of their own food stations open because they didn’t have employment to open all of them.

We were extremely busy from the first game even though attendance was not up to par at the beginning of the season.

Wow, so sales were better than a regular year?

Just as good as every other year.

Did you do anything different this year because of COVID?

We stayed status quo because I couldn’t get enough employees to do anything different.

What are you expecting for the Blues?

They are going to offer a full house. We’ll see how many people go and then we’ll just go from there. I am expecting it to be up to standard sales.

Anything you are doing different there?

I have not finalized my menu. I’m going to tweak it a little bit, do something fun.

We are going to put the “Gloria sandwich” on there because it’s a really big seller. (Gloria as in the Blues’ victory songduring their Stanley Cup-winning season.)

What’s on the Gloria sandwich?

I know you’re a big hockey fan. What’s your prognosis for the Blues?

They got a great squad. I think they are going to do well. I don’t know if they will be one of the top five teams, but I think they will do really well in their division.

How’s the preparation for Sukkot going for you?

It’s an extremely busy time of year for meat sales, and we’re just busy. Supply is low because of employment problems everywhere. Certain items are not available, so we’re just doing the best we can.

What items are not available?

We haven’t had raw chicken livers since the beginning of the pandemic. Chicken wings are a very, very high commodity item.

There are certain things that are just hard to get.