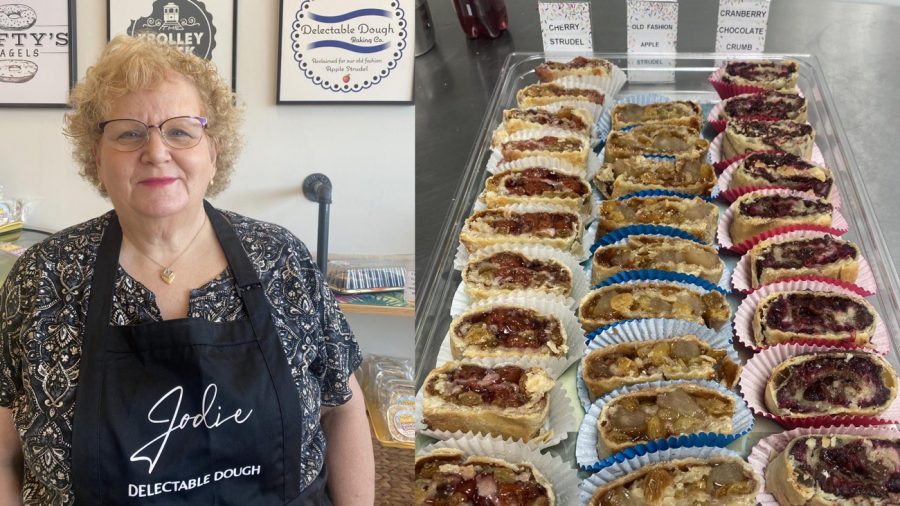 St. Louis baker Jodie Bertish and some of her strudel selections on display.

To help overcome shyness as a girl, Jodie Bertish’s parents sent her to a cooking class. She adored it. So much so, it jump-started her love of baking.

She began experimenting with recipes and sharing the results with family and friends.

Her great grandmother was known for her strudel, so, at her father’s suggestion, Bertish started playing around with the ingredients to duplicate her Bobba’s brand. Problem was Bobba didn’t write down her recipe. Like many Jewish great grandmothers of a certain time, she kept it in her head.

Bertish spent hours experimenting, working hard to get the pastry dough thin and flaky, just like Bobba’s, and the apple filling bursting with flavor. Finally, her father declared one of her creations a winner.

“You’ve got it,” Bertish remembers her father telling her. “That’s the one.”

“Friends and family kept telling us we should open a bakery,” recalled Bertish, 63 and a member of Congregation Shaare Emeth. “So we finally did. My dad, who was an engineer, designed it.”

Not long after the bakery began, Bertish met her future husband, Gerry, a physician’s assistant. After they married, she became pregnant with the first of the couple’s two sons.

“Running the bakery just became too much once I had children,” Bertish said. “They wound up going to Shaare Emeth preschool, and I wound up working there part time on the days the bakery was closed. But it just got too hard with the kids. So we closed after about four years.”

Bertish eventually found employment with Special School District as an occupational therapist, the field in which she had earned her bachelor’s degree. When she retired in May, she decided it was time to push ahead full-time with her first love: running a bakery.

“I always wanted to get back to it,” she said, adding that she is helped by her sister and other family members, including her sons, who do social media for her.

These days, you can find Bertish’s signature strudel at the Delectable Dough stall inside the Baker’s Hub in Chesterfield. It also is available at a handful of Schnucks markets, including ones in Ladue, Creve Coeur, Chesterfield, Des Peres and Richmond Heights.

At the Baker’s Hub, a slice goes for $2.40, six slices for $12 and a loaf of 12 slices for $24. She says that while her ingredients are pareve, her products are not certified kosher.

Asked what makes a good apple strudel, Bertish said: “A real, thin flaky dough, for one. And a variety of sweet apples. Some like dry strudel, but I like a fruity, juicy one, which is what I make. I have some customers come in and say, ‘This is exactly how my grandmother used to make it.’ ”

And while her acclaimed strudel might be what draws customers, Bertish can bake just about anything, including an incredible assortment of sweets and pastries perfect for special occasion and shiva trays.

She is accepting orders for the High Holidays for strudel and other sweet treats. To see her offerings and for more information, go to delectabledough.com. To place an order, email [email protected] or call 314-537-2341.