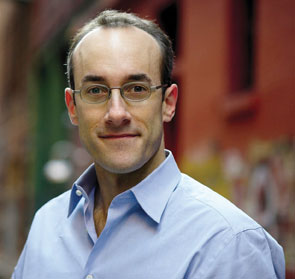 Dan Senor: Co-author of ‘Start Up Nation: The Story of Israel’s Economic Miracle’

How is it that Israel-a country of 7.1 million people, only a little more than 60 years old, surrounded by enemies, in a constant state of war since its founding, with no natural resources-produces more start-up companies than large, peaceful, stable nations such as Japan, China, India, South Korea, Canada and the United Kingdom?

That was the question that author Dan Senor asked and answered last week when he spoke in front of 300 people at Washington University’s Graham Chapel. Senor, adjunct senior fellow for Middle East Studies at the Council on Foreign Relations, co-authored the 2009 book “Start-up Nation” with journalist Saul Singer, which examined this question in detail.

To Senor and Singer, “Israel is not just a country but a state of mind,” a nation in which “necessity is the mother of invention” is not a figure of speech but the driving force that encourages innovation, entrepreneurship and rationally thought out risk taking.

Calling “chutzpah” a major trait of Israeli business innovators, Senor quotes a business analyst as saying, “When an Israeli entrepreneur has a business idea, he will start it that week.”

Senor said that among the factors contributing to what he called “Israel’s economic miracle” is its immigration policy, which made it possible for Israel to absorb one million Jews from the former Soviet Union, along with other waves of immigrants from Morocco, Ethiopia, Iraq and other nations. In 10 years, immigration helped Israel’s population grow by one-fifth.

“Immigrants to Israel have arrived familiar with hardships, similar to the Jewish immigrants who came to the United States and had to endure economic challenges before achieving such dramatic success in the years that followed. Israel is enriched by 70 or more different nationalities… All of these people from such diverse backgrounds have served as a turbo-prop engine to spur Israel’s economy,” he said.

As an example of a new Israeli entrepreneur, Senor mentioned Shai Agassi, who had at a young age become an executive at SAP, the largest enterprise software company in the world. It had purchased Agassi’s Israeli start-up, Top Tier Software, for $400 million.

Later, Agassi “came up with an idea so ambitious that most people thought him naïve,” said Senor. He decided “the most important thing to do was to figure out how to take a single country off of oil.” Agassi believed if one country were able to become completely oil-independent, the world would follow. The first step was to find a way to run cars without oil.

“Agassi’s vision became an infrastructure: Wire thousands of parking spots, build battery swap stations, and coordinate it all over a new ‘smart grid.’ In most cases, charging the car at home and the office would easily be enough to get you through the day. On longer drives, you could pull into a swap station and be off with a fully charged battery in the time it takes to fill a tank of gas,” Senor said.

Agassi’s start-up, called Better Place, would own the batteries while the consumers own the cars.

“Better Place would be like a cellular provider: You would walk into a car dealer, sign up for a plan based on miles instead of minutes, and get an electric car. But the buyer wouldn’t own the car battery; Better Place would. So the company could spread the cost of the battery over four or more years. For the price consumers are used to paying each month for gas, they could pay for the battery and the electricity needed to run it. ‘You could get to go completely green for less than it costs to buy and run a gas car,'” Senor quoted Agassi as saying.

Senor cited as an example of the benefits Israel realizes from the Israel Defense Forces universal service, Agassi “recruited a former Israeli army general-a man skilled at managing complex military logistics-to become the company’s local Israeli CEO and lead the planning for the grid and the national network of charging/parking spots.”

The IDF, Senor noted, has a very small number of officers at the top of its organizational pyramid, which forces the officers at the middle and lower levels to “improvise, innovate and make fast decisions,” the same kind of spirit that has spurred Israel to such impressive economic success.

In the question period after his talk, Senor said it was too early to tell how the current turmoil in the Arab and Muslim worlds would impact Israel’s economic health. “I am optimistic based on how well Israel did despite the grim precedents in 2000 when you had the collapse of the Oslo Accords, the Second Intifada and in the wars with Hezbollah and Hamas,” he said. “Despite all of this turmoil, Israel’s positive economic indicators more than doubled. During this period, Warren Buffet bought 80 percent of the Israeli firm Izkar for $4.5 billion.”

Senor closed his remarks with strong criticism of “the international campaign to boycott and delegitimize the state of Israel. The greatest blow against this movement is the fact that Israel’s economic growth is truly making the world a better place,” he said.

Senor was originally scheduled to speak at Washington U. last month, but the program had to be re-scheduled because of an ice storm. An audience of more than 300 students, Jewish community leaders and the general public turned out for his talk, which was co-sponsored by the Jewish Community Relations Council’s Israel Business and Technology Committee (JCRC/IBTEC), with the support of the Mildred Herbert and Julian Simon Foundation.

Senor was introduced by Steve Malter, Professor of Business in the Olin School of Business at Washington University, who uses Senor and Singer’s book as a textbook for a class he teaches on Israel’s economic success, and who brought his students on a field trip to Israel for a first-hand look at what the authors call its “economic miracle.”