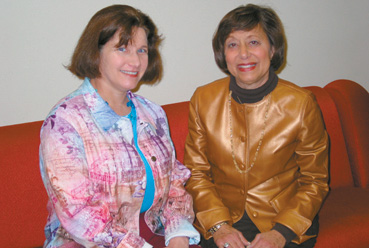 BY PAM DROOG JONES, SPECIAL TO THE JEWISH LIGHT

Cathy Cohn of St. Louis has known the Raskas family several years and certainly had heard about Adinah Raskas’ illness. “About a year ago I called Adinah’s husband, Heschel, and asked him, ‘Does Adinah need donor-directed blood?’ and he said, ‘No, she needs a kidney,'” Cohn says. “It all took off from there.”

Cohn was impressed by Raskas’ spirit despite her sickness. “Adinah was so brave. She never complained. I thought that was so incredible and it really inspired me,” she says. After considering donating her kidney, Cohn, who teaches and is a freelance writer, discussed her decision, first with Raskas’ husband, then with Raskas herself. “I didn’t want to tell anyone else until I was sure it was going to happen. I didn’t want anyone to worry more than they had to,” she says. She went through a long series of physical and psychological tests to make sure the procedure would go smoothly. “I kept passing every test,” Cohn says. “I felt if we are this close of a match, it must be God’s way of saying, ‘This is the right thing to do.'”

Raskas, who is a former board member of the St. Louis Jewish Light and current president of the Saul Brodsky Jewish Community Library, was “very moved and hopeful,” Cohn says. “She called me a couple of weeks before the surgery and said, ‘Are you sure you still want to do this?’ Really, it never crossed my mind not to.”

Cohn says she was not scared going into surgery. “I understood that my remaining kidney would grow larger to accommodate the change and that there would be no long-range ramifications. I don’t have to be on medications the rest of my life,” she says.

Naturally her family was concerned, but very helpful, Cohn says, in particular her three children and twin sister, Carol. In addition, Cohn had to take several weeks off from teaching middle school social studies and writing at Mary Queen of Peace school. “The Mary Queen community has been wonderful, so helpful and thoughtful,” she says. “It was a lot to ask of them. It hasn’t been easy for them or my family. I’m not the only one who made a sacrifice.”

Cohn has been recuperating at home since Feb. 13. “It’s been very tiring and at times painful. It’s hard but anything worthwhile is,” she says. “I’m feeling better. I’ve been told in a few weeks this will all be a vague memory.” She’s planning to return to work on March 27.

Cohn doesn’t see herself as a hero or deserving of special tributes or treatment. “I’m the same person I always have been,” she says. “I didn’t want anything from this except to help Adinah. Just hearing her say she feels better makes everything worth it.” Cohn adds she recently celebrated Purim at the Raskas home, “and to see Adinah so full of energy, it’s really a miracle.”

In addition, Cohn says, “I want people to see that donating my kidney worked in this instance, so others may be encouraged to consider it. You can’t go into this expecting anything more than helping someone feel better, and you have to understand it’s a long recovery.

Adinah Raskas is recovering from the kidney transplant that took place last month.

“She gave me a gift of life, and that’s the highest form of tzedakkah,” Adinah says. “It’s hard to know how to respond, except to be grateful and thankful that someone was kind enough to give such a precious gift.”

The experience convinced her of the power of prayer, Raskas says. “I tell people their prayers helped save me and I honestly believe it,” she says. “I think about life in a different way now. I feel like the Jewish community embraced me and that made a real difference.”