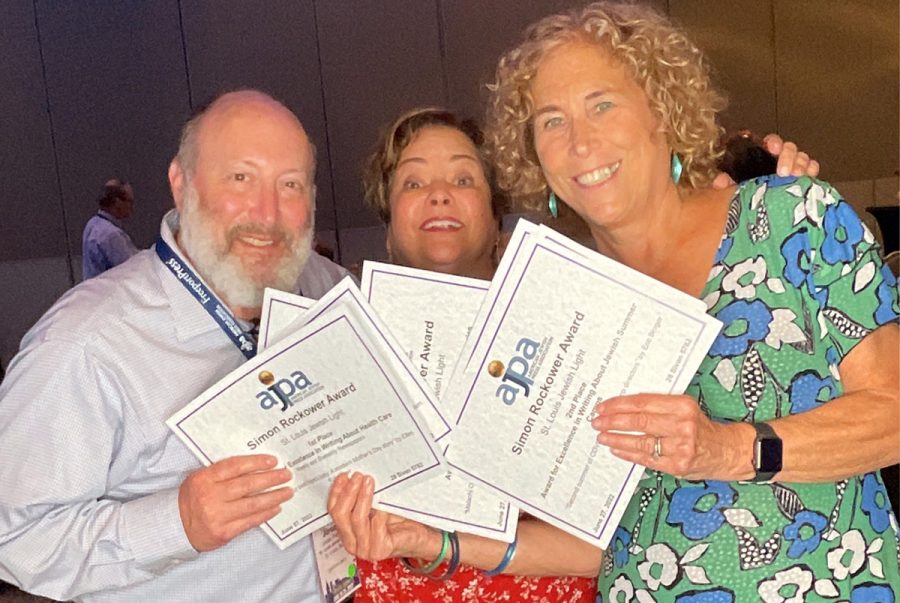 From left, Jordan Palmer, Betsy Schmidt and Ellen Futterman of the Jewish Light hold the 2022 Rockower Awards the paper won during the American Jewish Press Association's annual award banquet on June 27 in Atlanta.

The St. Louis Jewish Light had a victorious night Monday at the 41st Annual Simon Rockower Awards for Excellence in Jewish Journalism.

The Jewish media outlet, in the weekly and biweekly newspaper division, won six awards, which were presented by the American Jewish Press Association during the Rockower Award banquet held at the Georgia Aquarium in Atlanta.

“In my 13-plus years as editor, the Jewish Light has always done well at these awards but has never won six of them in one year,” said Ellen Futterman, editor-in-chief of the Light.

“I am thrilled that the Light continues to tell the stories that reflect and connect our vibrant Jewish community and resonate with others.”

Futterman earned the first-place award in weekly and biweekly newspapers for Excellence in Writing About Health Care for her story about two best friends, one of whom became a pregnancy surrogate for the other. The judges commented that the story was a “warm, feel-good human-interest story about friendship without limits. Well-written and well-paced.”

The big Light winner of the night was former Associate Editor Eric Berger, who captured four of the newspaper’s six Rockowers.

The judges commented: “Kudos to Eric Berger for a thoughtful, well-balanced examination of a controversial subject. His article presents multiple viewpoints without allowing inflammatory rhetoric to interfere with the narrative. The reader understands why parties support and oppose funding without knowing how Berger feels. That’s how good journalism works.”

Berger also won second place in a new Rockower category — Award for Excellence in Writing about Jewish Summer Camp — for his story about the second summer of COVID challenges for camps. His article about the passing of Temple Emanuel cantorial soloist Malachi Owens Jr. came in second place for Award for Excellence in News Obituaries. He also earned second-place honors in the Writing About Seniors category, for a story about what retirement looks like for St. Louis rabbis.

Berger left the Light at the end of last year to concentrate on his freelance career, though he remains a frequent contributor.

Former Missouri legislator and executive director of ProgressWomen Stacey Newman won a second-place award for Excellence in Single Commentary for “There isn’t always two sides to every issue, as the Holocaust demonstrates.”

Including this year, the Light has won 42 Rockower awards over the last decade.