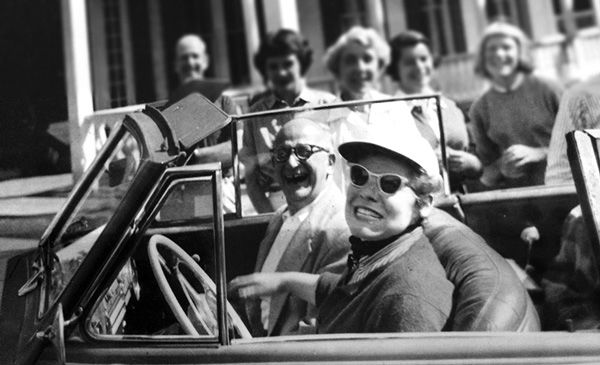 In July 16, the Jewish Film Festival will screen a documentary about Hans and Margret Rey (pictured), the creators of Curious George. Photo: Penny Stearns Palmer

At 4 p.m. Sunday, July 16, the festival will screen “Monkey Business: The Curious Adventures of George’s Creators.” Narrated by Sam Waterston, the film chronicles the story of Curious George’s creators, Hans and Margret Rey. From fleeing the Nazis on self-made bicycles to encounters with exotic animals in Brazil, the Reys lived lives of adventure that are reflected in the pages of the popular children’s book series, first created 75 years ago. The film interweaves archival footage and interviews with them, their friends and experts, along with animated sequences in a style inspired by the world of Curious George.

At 4 p.m. Sunday, Aug. 20 the festival will screen “Operation Wedding.” The documentary, set in Leningrad in 1970, tells the story of group of young Jewish dissidents plotting to hijack an empty small passenger plane and escape from the USSR. Caught by the KGB a few steps from boarding, they were sentenced to years in the gulag, and two were sentenced to death. Forty-five years later, through a collage of intimate interviews, rare archival footage and reenactment, the filmmaker reveals the compelling story of her parents, who were leaders of the group considered “heroes” in the West but “terrorists” in the Soviet Union.

View the complete film festival schedule at stljewishfilmfestival.org. The Jewish Film Festival is a program of the Jewish Community Center.