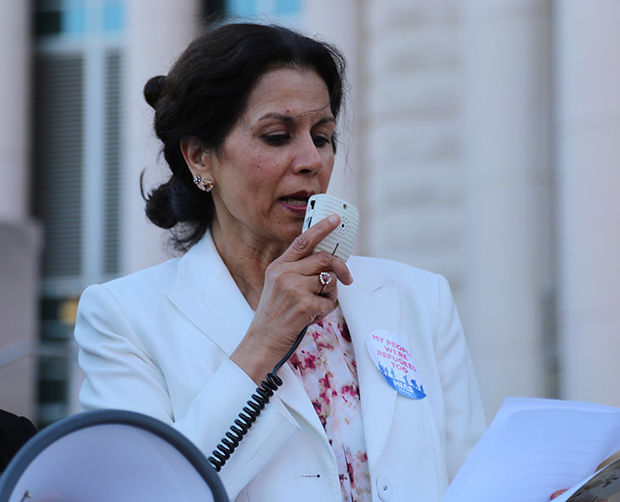 Dr. Ghazala Hayat of the Islamic Foundation of Greater St. Louis speaks at a 2017 interfaith vigil at the Thomas F. Eagleton Courthouse downtown, marking the 78th anniversary of end of the voyage of the MS St. Louis, an ocean liner carrying refugees fleeing Nazi Germany. The vigil was organized by the Jewish Community Relations Council, the Holocaust Museum of St. Louis and several interfaith partners. Photo: Bill Motchan

The Islamic Foundation of Greater St. Louis supports the Jewish community in condemning anti-Semitism even though the organization choose not to participate in an interfaith press conference last week, according to the Islamic organization.

The group declined to attend the event organized by Jewish Community Relations Council of St. Louis on June 1 at Congregation B’nai Amoona because Muslim leaders felt the conference should also address the Israeli government’s actions towards Palestinians.

The group instead issued a statement condemning anti-Semitism.

“What happens in the Middle East, it affects both communities,” said Dr. Ghazala Hayat, chair of the Islamic Foundation’s public affairs committee. “We both feel in our own way, but what our relationships are and the way we work with each other and serve the community at large, it should not have an effect on that. We stand for each other if anybody’s rights are being trampled.”

The JCRC event, which included representatives from various faith communities and Democrat and Republican lawmakers, was prompted by a spike in the number of anti-Semitic incidents across the United States, according to the Anti-Defamation League,  amidst the military conflict between Israel and Hamas.

Of the JCRC event, Hayat said, “I respect every organization, every faith, it’s their right to do what they want to do, and what you are saying about anti-Semitism, we stand with you.”

The group also placed an advertisement in the St. Louis Post-Dispatch last week stating, “We stand against hate and discrimination. We condemn anti-Semitism. We decry the unjust and oppressive policies of Israeli government towards Palestinians. We denounce loss of all the civilian lives. We are heartbroken at the loss of children mostly Palestinians.”

The Israeli-Palestinian conflict was mentioned at the press conference. James Croft, leader of the Ethical Society of St. Louis, distinguished engagement concerning the conflict from anti-Semitism, which he described as “despicable.”

“The Ethical Society is well known, perhaps notorious even, for being a very progressive religious institution. Perhaps then, one might think that we would have some sympathy for those who are in their zeal to promote necessary political change in the Middle East, and to defend the dignity of the Palestinian people, tip over into anti-Semitism. Nothing could be further from the truth,” Croft said. “Hatred in the pursuit of a political aim is still hatred.”

Deon Johnson, bishop of the Episcopal Diocese of Missouri, spoke about how his visit to Yad Vashem, Israel’s Holocaust memorial, affected his views on the suffering Jews have faced.

“Remember that small acts of anti-Semitism can escalate into an avalanche of hate,” said Johnson. “Like my colleagues gathered today, I and the people of the Episcopal Diocese of Missouri stand with our Jewish sisters and brothers, our siblings, to declare that hate, violence and discrimination and acts of violence and intimidation have no place, no power and no prominence here.”

Missouri State Sen. Brian Williams, D-St. Louis County, who was joined by State Rep. Adam Schwadron, R-St. Charles, spoke about the importance of condemning hatred against various groups, whether they are Black, Jewish, women or some other demographic.

“We have enjoyed a longstanding relationship with our Muslim community that has gone through difficult times in the past and that we have been in touch with them, and we are all committed to continuing in dialogue and talking through the difficult things that are happening now as well,” said Picker Neiss.

Progressive Jews of St. Louis (ProJo), a group that has called for boycotts of local Jewish institutions, in a Facebook post praised the Islamic Foundation for not attending the event. ProJo also called for “clergy of all faiths to stand in solidarity with the Palestinian and Muslim community right now and avoid interfaith work as long as this power imbalance stands or issues of injustice are ignored.”

Picker Neiss disagreed with the ProJo’s framing of the Islamic Foundation’s actions.

“People overinflating issues or choosing to share things without getting the facts or speaking to the people who are directly involved contribute to the problems that we have,” said Picker Neiss. “ProJo decided that they were going to take the [Islamic Foundation’s] statement and make it that the Muslims were boycotting, but when I called” the foundation leadership, “they told me that was never their intention.”