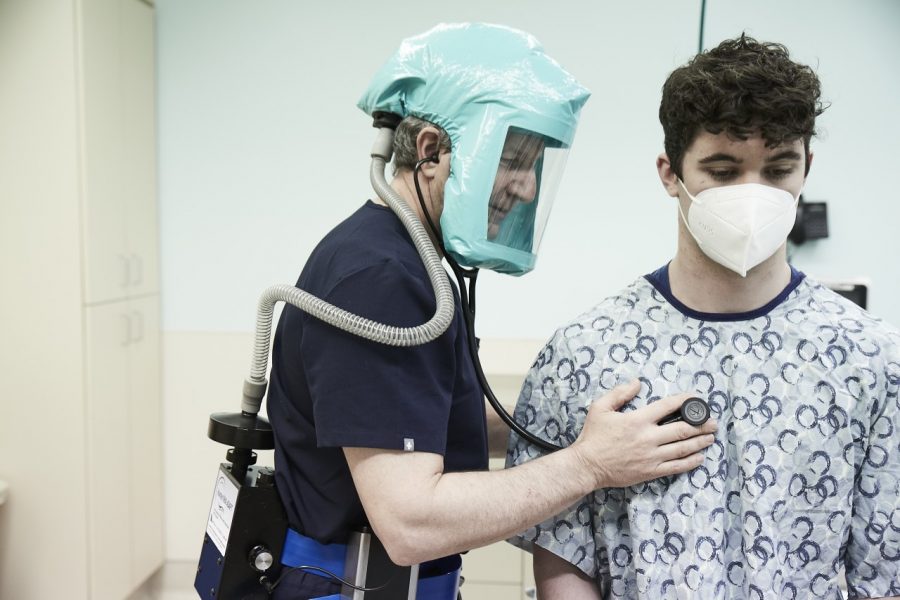 Dr. David Katzman examines a patient while wearing his PAPR Force device, which is designed to protect wearers from COVID-19.

Eric Berger, Associate Editor
At the start of the COVID-19 pandemic, Dr. David Katzman learned of the shortage of personal protective equipment for medical providers and wanted to help.

The internist, who practices medicine in Creve Coeur and belongs to Central Reform Congregation, found a YouTube video showing rudimentary powered air purifying respirators and determined that he might be able to build something that would work better than N95 masks.

That idea became a project for which Katzman and his practice partner, Dr. Jennifer DeLaney, enlisted patients, engineers and manufacturers.

In November, the National Institute for Occupational Safety and Health (NIOSH) approved Katzman’s device, the PAPR Force, and he has since donated the machines to hospitals in the United States and in developing countries where the virus continues to pose a significant threat.

“We want health care workers to be protected,” Katzman said.

In April 2020, as the virus raged through New York, Katzman’s oldest daughter, Caroline, was serving as a medical resident at New York University and had to wear the same N95 mask for more than a week because of the short supply, her father said.

Given that the Centers for Disease Control and Prevention recommends limited reuse of the N95, Katzman started trying to build the device.

In a monthly newsletter to patients, he explained his goal and asked whether they had extra motors for CPAP machines, which are used to treat sleep apnea, that he could repurpose for the device.

Patients donated about 100 motors. Some also bought batteries. Others bought snorkel masks, which were used in the early PAPR models.

Some patients who worked at Hunter Engineering, a Bridgeton-based company, said, “Whatever you need as far as engineering help, we’re there for you, for free,” Katzman recalled.

Other patients established a fund at Washington University to pay for 300 PAPR devices.

The device features a loose-fitting hood and a motor that sucks air in through a filter, which means “the only air you are able to breathe in is the filtered air,” Katzman said.

Even though Katzman and his fellow volunteers were able to successfully assemble the device, people were not immediately able to use them.

“What we learned along the way is that for anyone to adopt these, it needs to be rigorously tested by NIOSH,” he said.

NIOSH did not approve the project’s first two submissions but finally did so in November.

Fifty-five devices have been delivered to Barnes-Jewish and Missouri Baptist hospitals, and 50 to hospitals in Jackson, Miss., where Hunter also does manufacturing.

As the number of COVID cases declined and people started getting the vaccine, Katzman and his collaborators realized that the greatest need was in developing countries, where there is less access to vaccines.

Katzman said in late April that he planned to donate 200 masks to medical providers around the world, including in Peru, Guatemala, Brazil and India, which is in the midst of a crisis due to the rapid spread of COVID-19 and a shortage of vaccines.

“If you can protect a health care worker, a doctor or a nurse in Mumbai from getting COVID, then [they] can take care of the COVID patients,” Katzman said.

In St. Louis, nurse Joan Jarmuszkiewcz has used the PAPR Force when working in the intensive care unit at Missouri Baptist. When wearing the N95, her goggles would often become cloudy as she breathed. That doesn’t happen with the PAPR, which also blows cool air, keeping her more comfortable, she said.

“The visibility is the big thing because when you are starting IVs or doing things to a patient, it’s always good to see well and not sweat,” Jarmuszkiewcz said.

Katzman anticipates that once the pandemic has subsided, a need will still exist for personal protective equipment as new illnesses emerge, and he plans to continue to donate the PAPRs.

“I think it’s going to be a necessity to have a certain supply of N95s on hand, at all times, as well as PAPRs on hand,” he said. “I think that’s part of emergency preparation for future issues.”