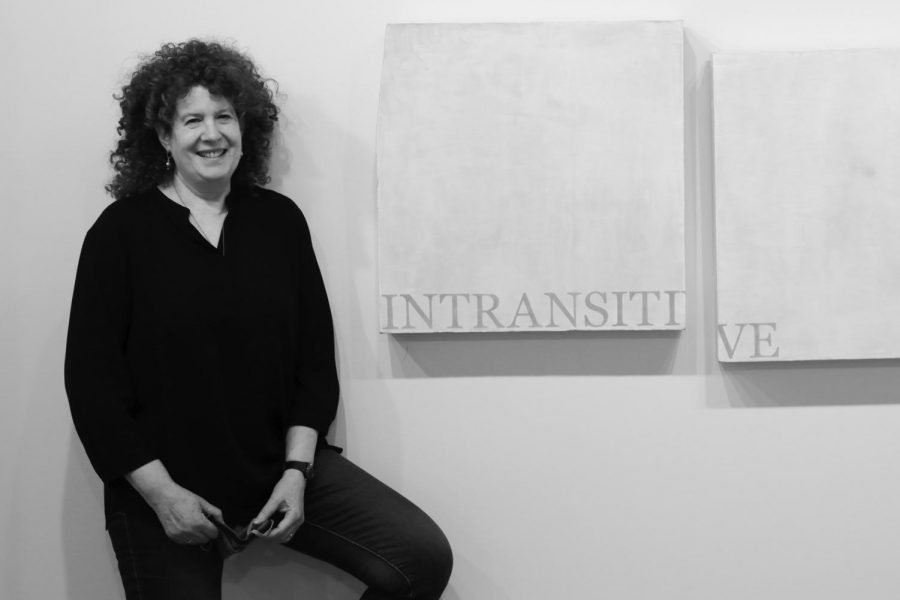 Joan Levinson’s work on the connection between language and visual art is on display at the High Low Gallery in Grand Center.

Joan Levinson’s current show at the Kranzberg Arts Foundation’s High Low Gallery in Grand Center, “Language Arts” is about the connection between literary and visual arts. Her works display certain words – “prologue,” “insistence” and “into” are a few examples – on complex canvases that Levinson builds and shapes from scratch, including the wood frames. From afar, her stark, white pieces look almost stone-like –given their thickness and sculptural nature – as she sometimes combines two or more canvases in one piece.  But as you move closer, traces of color rise through the white veneer, a technique Levinson seems to have perfected by building the surface with 30 or more translucent layers of oil paint. It is a painstaking process that requires patience and time – she said her pieces take about six months from start to finish.

“I’m fascinated with the physical properties of the oil paint itself,” said Levinson while she was in St. Louis, her hometown, to install her show, which runs through June 26. “The materials, the pigments, of oil paints are made from parts of the Earth, minerals of various sorts, nothing artificial. To get the painting to look like it does I have to understand those properties.”

The words she highlights in each painting matter as well. “Words have to do with my interest in grammar. Sentence structure and rhythm, meaning is important, too. Meaning is essential to words, but they are all about being ambiguous, like intransitive verbs. It’s not just a verb, there are nuances.

“I did a whole series of prepositions because they are usually very small words but serve such an important purpose in establishing time, place and the relationship between things.”

The middle of three sisters, Levinson grew up in Olivette (her parents still live there), graduated from Ladue Horton Watkins High School and attended Temple Emanuel. She received her bachelor’s degree in fine arts from University of Kansas in 1978 and her master’s at Cranbrook Art Academy in 1981.

She moved to New York in 1990 and now lives in Brooklyn with her husband, a retired hospital administrator.

“Language Arts” was supposed to open in October but got pushed back because of the pandemic. Levinson, who works parttime as a writing coach for nurses at a public hospital in Brooklyn, said she used lockdown to spend more time in her studio to create. And while all the work in her 13-piece show at the High Low is for sale, that’s not where she is focusing her energy.

“Success is when people come see my work,” she said. “I want people to see it and have a reaction. I hope it makes them happy.”

For more information about the High Low, 3301 Washington Ave., including its hours of operation and Levinson’s show, go to kranzbergartsfoundation.org.

Artist’s statement about “Language Arts” show:
Joan Levinson’s minimalist works are a confluence of art and language, an exploration of linguistic structure and grammar as well as of similarities between visual and literary arts. Building sentences is both a narrative and visual experience, a meeting of logic and lyric.  She is fascinated with painting technique and the physical qualities of different pigments and oil media. The paintings in the exhibit have thirty or more translucent layers of oil paint, which accumulate into a complex surface that is filled with light and hints of color. The constructed, shaped canvases emphasize the object-ness of the work and all its elements. They cross boundaries into sculpture.

These works confront the transitory nature of being—here and not here. Is our imagination just as real as the physical world around us? The paintings hover against the wall, sometimes appearing solid as stone with their surface, shape, and depth, yet nearly disappearing in their whiteness. The silvery words convey meaning, but also shimmer as pattern and shape and sometimes get lost in the background. Some of the works emphatically assert their presence in the world, while others live in a more ambiguous realm, a place in between.

The world has turned completely askew with the devastation caused by the coronavirus. Everything that we depended on, that we thought we knew to be true, has changed. These paintings began as an abstract theory about the transient nature of reality, but as the many months have passed, that theory has turned out to be frighteningly real.