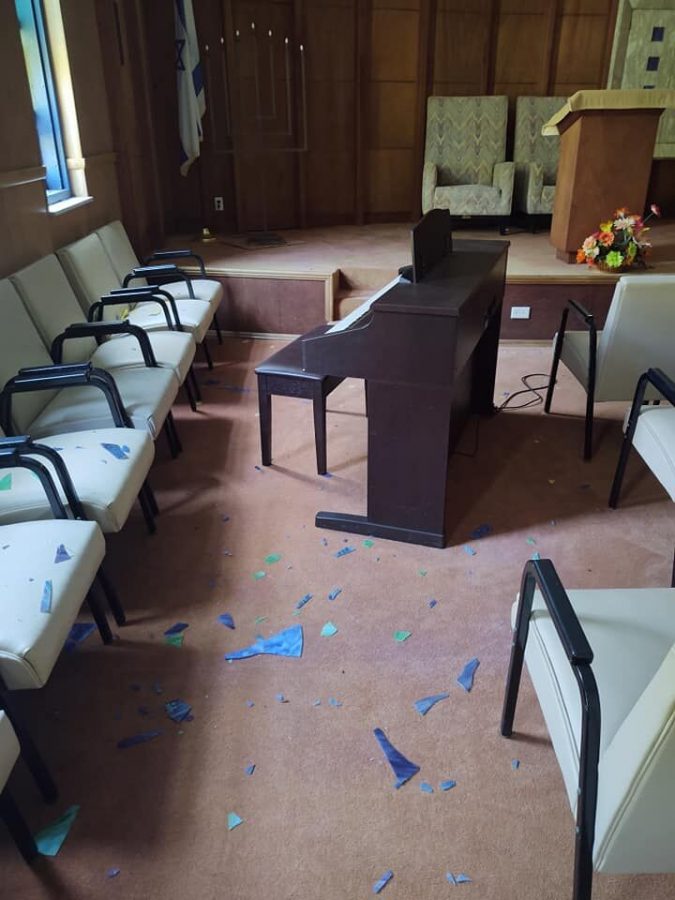 If whoever has vandalized United Hebrew Temple in Benton, Ill., three times in recent months thinks those acts are going to cause the local Jewish community to pack up shop, that person or persons will be disappointed, said Karen Uban, the vice president of the Reform congregation in southern Illinois.

In fact, the congregation may increase how frequently its members gather at the synagogue so the building is not left unattended as much, she said.

“We are going to fix everything, and we are going to go back and pray and we’re not going to be chased out after 65 years,” said Uban, a retiree who has been a member of the congregation since 1980.

The Benton Police Department is investigating the incidents, which started about six weeks ago. Forensic specialists are trying to unlock an iPhone discovered after the third vandalism, according to Police Chief Mike Andrews.

About three weeks before Rosh Hashanah, someone broke a window of the congregation, according to Uban. Then on the holiday, when congregants entered the synagogue, they discovered that another window had been broken and that a speaker, a microphone and amplifiers had been stolen. On Oct. 9, a pest control worker found multiple broken windows and called the police.

Uban and other members then found that 10 stained glass windows and Hebrew letters on the Torah ark broken, bulbs on a memorial board smashed and kippahs strewn throughout the sanctuary, among other disarray.

“It’s quite shocking…because we have never had these kind of problems before,” said Uban.

The synagogue, located about two hours from St. Louis in the town of 7,000, has seen its membership drop sharply in recent decades, a common trend among congregations in small towns as people migrate from rural areas to cities.

When Uban joined the synagogue, there were about 70 members; now the congregation has between six and 18 people for a Shabbat service, depending on the weather, she said.

“A lot of us who belong to this congregation are from other parts, either married into the congregation or came from different communities and settled here. The university, [Southern Illinois University in nearby Carbondale], is a big attraction for a lot of people,” said Uban.

Congregants typically gather once a month for Shabbat services, for other Jewish holidays and for special occasions like bar and bat mitzvahs. But because of the pandemic, the synagogue did not hold any events from March until the High Holidays.

The Jewish Federation of Southern Illinois, Southeast Missouri and Western Kentucky organized a fundraising campaign to pay for the cost of repair and new security equipment. The organization aimed to raise $6,000; by Thursday afternoon, the organization had raised $6,841.

“Some really unfortunate things happened, but people are really rallying around us,” said Uban.

The police department has also increased its patrols of the building, Andrews, the chief, said.

In addition to the police, the congregation has also been in touch with the Anti-Defamation League’s Heartland office, which covers southern Illinois, Missouri and eastern Kansas, and with Jewish Federation of St. Louis’ community security director.

“Now with tangible levels of anti-Semitism happening to institutions around the country, there is still a need to protect [synagogues] whether they are occupied or unoccupied. I think there is a recognition of that and a recognition that you don’t have to spend a lot of money in order to create layers of security,” said Karen Aroesty, regional ADL director.

In spite of the vandalism and its shrinking membership, Uban hopes that the congregation can remain open for at least another five years so her grandson can have a bar mitzvah ceremony there, she said.

“It would be nice to see the congregation a little invigorated and possibly a couple more members will join us. There might be Jewish families out there that just don’t belong to a temple and they might be interested,” Uban said. “A lot of people don’t know that there is a Jewish temple in Benton, but the local television stations have come out to film the damage,” so now people may know.