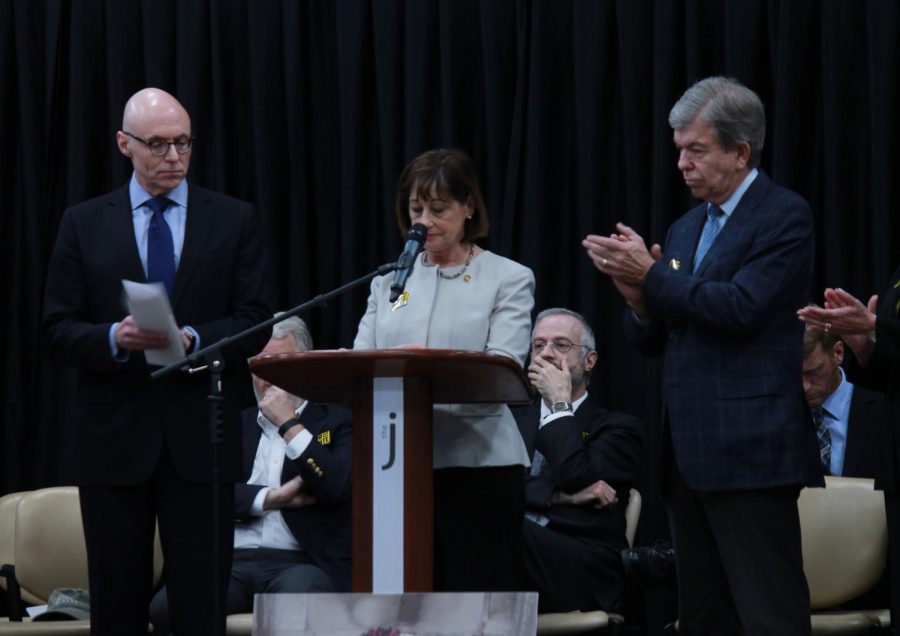 Ahead of the 2020 election, Democrats hoped to not only win the presidency and gain control of the U.S. Senate, but also to maintain a healthy majority in the U.S. House.

That appears unlikely. While the party is expected to maintain control of the House, the Republicans have flipped at least five seats and could unseat more Democrats as the counting of mail-in ballots continues.

Among those districts that the Democrats eyed for a possible victory — Missouri’s 2nd Congressional District.

But unfortunately for the party, Missouri State Sen. Jill Schupp, who is Jewish, lost to U.S. Rep Ann Wagner by a 52% to 45.4% vote.

Schupp, a 65-year-old Creve Coeur resident who belongs to Congregation Shaare Emeth and has sponsored legislation aimed at combatting the boycott, divestment and sanctions movement against Israel, spoke with the Jewish Light two days after the election about the results, how Judaism shaped her desire to serve in public office and what her future holds.

You and Cort VanOstran, the Democrat who ran in 2018, both came close to winning. Do you think it’s just impossible for a Democrat to win that district?

I think that what’s important to remember is that people came out in large numbers and voted and made their voices heard, and that’s what we wanted to have happen. The year Cort ran was very different from the year that I ran and yet the results were essentially the same. I hope (what) people take away from this is that in this district, where we have a whole lot of people on different sides of the aisle, what we need to begin to do is to first start with ending the coronavirus and joining together to fight our common enemy instead of fighting each other, getting us back to a place where there is health and a place where people have access to healthcare regardless of their health status.

I think that is a critical message that we brought to the fore, and we heard some messages from my opponent in response saying she is going to begin to protect people with preexisting conditions, so if that’s an outcome of this race, it’s one that I wanted to certainly see.

I think that we all want our kids to be able to go back to schools in a safe environment and for our schools to stay open for in-person learning. We do that by fighting our common enemy, the virus. The message that I heard from so many people and that I tried to make sure was delivered was that we all want an economy that is able to reopen and works for all of us.

Are you planning on serving the rest of your term in the Missouri Senate? (Schupp’s term ends in January 2023.)

Well, I just actually got back from [Jefferson City] today because Gov. Parson had called a special session for the House and the Senate, so you know, this is what I was elected to do, and I take my responsibilities very seriously, so that’s my plan, yes.

Another issue that was disappointing and surprising for some people in Missouri was the passage of Amendment 3, which reverses key parts of a redistricting ballot measure approved by voters in 2018. Did you expect that to happen? What are your thoughts on that?

The polling was wrong in a lot of places. We had heard that what the voters decided in 2018 with the passage of Clean Missouri was very likely to stand. I know that people worked hard and spent money to make sure that we would have a fair process for doing redistricting in the state of Missouri. I think the fact that 60% of voters voted for Clean Missouri in 2018 and that was overturned by 51% of the voters in 2020 just gives me a lot of pause. From my perspective, it’s extraordinarily disappointing because what this new amendment does is really take away choice about who will represent them in Jefferson City when districts are gerrymandered to protect certain legislators and certain parties.

When you think about serving in the U.S. House, are there things that you would have liked to accomplish on behalf of the Jewish community?

It’s interesting because I think my goals really reflect the values that I grew up with. My family has been a member of Shaare Emeth since (when) I was in second grade, and some of the things that I learned as a member of the Jewish faith are taking care of your neighbor, being part of the community, and to know that’s it’s not enough for just yourself to be OK but for the people around you to have the same sort of opportunities that you do. And I have told Rabbi [Jeffrey] Stiffman on many occasions that even as a young girl in Sunday school, he told this story of how community problems were solved, and often times it was at the temple, during Shabbat. That picture comes into my head about those discussions and how to resolve and solve problems in the community.

It was a part of my awakening to the idea that we need to find places to work together even when we disagree, to get at good solutions . Again, I attribute a lot of that to Rabbi Stiffman for being the one who made me to start to think in those terms.

Education is of such importance to the Jewish community and so making sure that kids have opportunities to go to great schools no matter the zip code they are living in, that’s part of my Jewish value. That’s something I had hoped to be able to work on in Congress.

Do you picture yourself running for some other office?

I do not, and yet I will tell you that this was such an amazing experience and such an honor. Yes, it was very hard work, but I met great people along the way. People who care and invest not just financially but with their time and their heart in so many ways. It has been just the greatest honor of my life in terms of being able to try to bring forward the values that I think so many people throughout our community and state and nation hold dear.

What I want to say is to the people of the Jewish community, my community, who stepped up in so many ways, I am so grateful. Whether I am serving in the Missouri Senate, or whether I am serving again here as a volunteer in the community, the values that we share are always what drive my desire and give me a sense of pleasure and purpose that makes me want to continue to serve in some fashion.