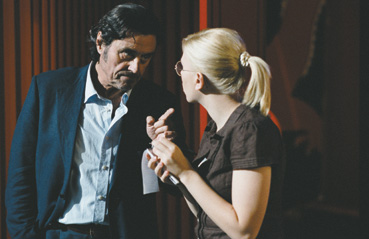 BY CATE MARQUIS, SPECIAL TO THE JEWISH LIGHT

Last year, writer/director Woody Allen gave audiences a terrific, chilling, dramatic thriller called Matchpoint. Matchpoint starred Scarlet Johansson, was set in London rather than Allen’s beloved New York, and drew on Theodore Dreiser’s novel An American Tragedy. Matchpoint proved that Woody Allen, whose reputation with the general public has faded although he is still regarded in Hollywood as a legendary filmmaker, still could make great films, something even dedicated fans were starting to wonder about after a string of less than stellar films.

For his new film Scoop, a mystery-themed romantic comedy, the director returns to London, Scarlett Johansson again stars, and the story even again includes elements from Dreiser, but the results are less successful for this light comedy. Scoop is still funny and entertaining in its light comic way, with some of the sparkling dialogue Allen is famous for, but the film is more likely to please dedicated Woody Allen fans. Scoop is better than Woody Allen’s other recent comedies but not on the same high quality level as last year’s Matchpoint.

Scoop opens with a bit of the supernatural, with a renowned but recently deceased British reporter Joe Strombel (Ian McShane), aboard a boat headed for the Great Beyond, getting the news tip of a lifetime from another recently deceased passenger. Her tip points to evidence that a serial killer now stalking London, the “Tarot Card Killer,” might be the handsome, aristocratic Peter Lyman (Hugh Jackman), son of a Lord and a successful businessman in his own right. The scoop is just too good to pass up but, with the reporter’s own scooping days now over, Strombel faces the challenge of how to get this information to a reporter in the land of the living. The answer appears in the form of a magic show, when a visiting American student journalist named Sondra Pransky (Scarlett Johansson) is chosen to help with a trick. The ghostly reporter appears to the startled student and gives her his hot news tip. Shaken and confused, she nonetheless enlists the reluctant help of the magician, Splendini (Woody Allen), in solving the case. With the magician, whose real name is Sid Waterman, posing as her father, the sleuths befriend the suspect and try to uncover enough information for the young journalist to write a scoop article. Things get complicated when she starts to fall for the charming aristocrat.

As always, Woody Allen wrote and directed the film. He again costars as his nervous, worried, talkative comic persona, which is one reason the film might work more for Woody Allen fans, since people either love or hate this character. Personally, I still think the comic character is funny, although less so than in Allen’s earlier films, but it does seem to be developing a sameness that is wearing thin. As for story, Scoop’s plot leaves the audience puzzled at points, like why the ghostly journalist never seems to give his prot ég é the most crucial tip, the one he first got, for the case. Some of the comic bits and the dialogue are funny but other parts of the film seem a bit stiff or maybe a beat off. Scarlett Johansson is better in her comic scenes with Woody Allen than in her romantic ones with Hugh Jackman. There is not much romantic heat between the characters and the acting, from both of them, seems a bit forced, although past roles have shown us that both these actors have talent. The film often has a touch of classic Hollywood ’40s, and Allen may have intended the film to have a bit of that era’s screwball comedy or a Thin Man mix of sleuthing and sophistication. However, it never quite jells completely, in comedy, romance or mystery, leaving the film more sporadically effective than it could have been.

Ironically, Woody Allen started his filmmaking career by making comedies but his best films of more recent years, Matchpoint and Sweet and Lowdown, have not been comedies while his biggest flops have. Curiously, Allen’s recent films seem to be better when he does not play a significant on-screen role. Maybe Allen is simply losing his comic instincts.

If you are a steadfast Woody Allen fan, Scoop is still worth the ticket price. It is not among his best films but it is not his worst either, by far. Last year’s dramatic mystery Matchpoint, which surprised both long-time fans who had been disappointed by his recent films and those who had largely written the director off, also set the bar high for his next film.