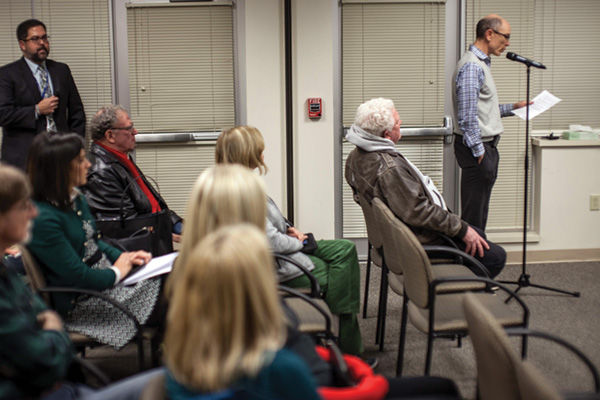 Michael Polinsky, a parent in Clayton, criticized the length of the suspensions for students who posted anti-Semitic content about classmates on Instagram. Photo: James Griesedieck

A group of Clayton High School students were disciplined last week after administrators learned that they had been targeting classmates with anti-Semitic hate speech on social media.

The students had used a closed Instagram group to post offensive images and language, but students, parents and administrators learned of the group two weeks ago.

District officials have disciplined the students and have contacted the Anti-Defamation League to try and prevent further hate speech, a spokesperson said.

Clayton High School is one of a number of schools in St. Louis County that has been forced to grapple with alleged racist incidents in the last two months. The sequence of events raise questions about what impact rhetoric during the recent presidential campaign has had on high school students.

Parents, students and other community members filled a school board meeting Dec. 14 to share their concerns about the district’s response to the social media activity. Some attendees said administrators did not respond to the actions strongly enough.

A district spokesperson said that he was unable to provide any details about student discipline because of state and federal privacy laws. Parents at the meeting said that the students had received different in-school and out-of-school suspensions.

The mother of one of the Jewish students who was targeted said she was “initially upset with the lack of severity of the consequences.”

“We also recognize that it’s not just the consequences but what happens (next) and how to hold people accountable when they choose to put out hate messaging,” said the parent who did not want to be identified but said her daughter is active in the Jewish community and talks with other students about her religion through the Jewish Community Relations Council’s Student–to–Student program. “I really hope the community and the board will address it in a way that can work at the systemic issue around cyberbullying and hate. … It’s now a community issue; it’s not just our issue.”

In addition to Clayton, the Ladue School District has also been dealing with the fallout of an incident in which high school students allegedly chanted, “Trump, Trump, Trump,” and then told black students they should go back to the back of the bus. The students who were chanting were disciplined, school officials said, but one week later, high school students walked out of classes to the district offices to protest what they said was administrators’  inadequate response to racist incidents.

At Mary Institute and St. Louis Country Day School (MICDS), a student who supported President-elect Donald Trump and Missouri Governor-elect Eric Greitens recently sent a letter to the principal stating that she had been discriminated against for her political views. In response, a black alum published a post online detailing the racism she experienced at the private school.

“I think the election campaign over the last year has seen an increase in really bad behavior online,” said Karen Aroesty, the Anti-Defamation League’s regional director for Missouri and Illinois. “I think there has been strong reactions to rhetoric on the campaign trail around race, national origin, religion. I think those of us who are advocates for minority communities have our work cut out for us.”

Aroesty did not single out supporters of Trump, who has been criticized for his comments on Muslims and Hispanics, in using hate speech.

“I think the levels of intolerance are on both sides — it’s just that the language of that intolerance is different, and I think folks on the left have expressed as much intolerance as folks on the right,” she added. “It’s just that it’s hard to recognize when we do that because we think we are right, and it’s just as easy regardless of our political affiliation or identification to point the finger and say the other side is wrong.”

ADL staff planned to meet with the Clayton superintendent and principals to develop additional programs that deal with bias and bullying, Aroesty said. She is also working to get schools in the St. Louis area to cooperate on issues like cyberbullying.