Retirement According to… Alan Spector 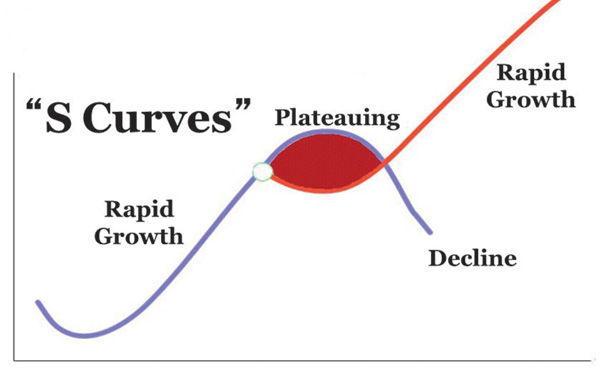 Visual  graph of the “S Curve” typically applied in business productivity can also be applied in your own life.

I recently got a call from a high school classmate, “I’m thinking about retiring, but I have no idea what I want to do.”

Just last week, a friend said, “The kids are finally well settled.  My focus for so long has been on them.  Where am I going to put my energies?”

About a month ago, an attendee at one of my retirement life planning workshops told me, “I’ve been retired for about a year and thought playing golf every day would be the ultimate.  Well, I’ve tried that for awhile and I’m beginning to ask myself, ‘Is this all there is?’”

Since writing Your Retirement Quest with coauthor Keith Lawrence and interacting with thousands of current and would-be retirees, I’ve learned to translate each of these inquiries into a simple question that people are really asking, “What’s next in my life?”

If you’re interested in learning more about answering this question for yourself, consider two things.  First, come to PrimeTime Expo on Sunday, Oct. 30 from noon to 3 p.m. I’ll be speaking about it and will have a table you can come by to talk one-to-one.  Second, think about this diagram and the concept of “S Curves.”

Companies, organizations, and individuals tend to cycle through “S Curves.”  We go through a period of rapid growth, but over time, if we don’t take action, that growth tends to plateau.  If at that point we haven’t figured out where our next period of rapid growth will come from, we tend to decline.  So, when is the time to figure out where the next growth spurt will come from?  Right—in the best case, while you are in a current rapid growth period.  As an alternative, figure it out when you feel a plateau coming on.  Either of those will help you avoid feeling and really being in decline.

See the small dot on the diagram.  Pretend that small dot is you.  Where are you on your personal S Curve?

If you’re convinced that figuring out “What’s Next” is important to keep you on the growth versus decline trajectory, it’s likely your next question is, “How do I go about figuring out ‘What’s Next?’”  Well, for that, come to PrimeTime Expo, and let’s talk.