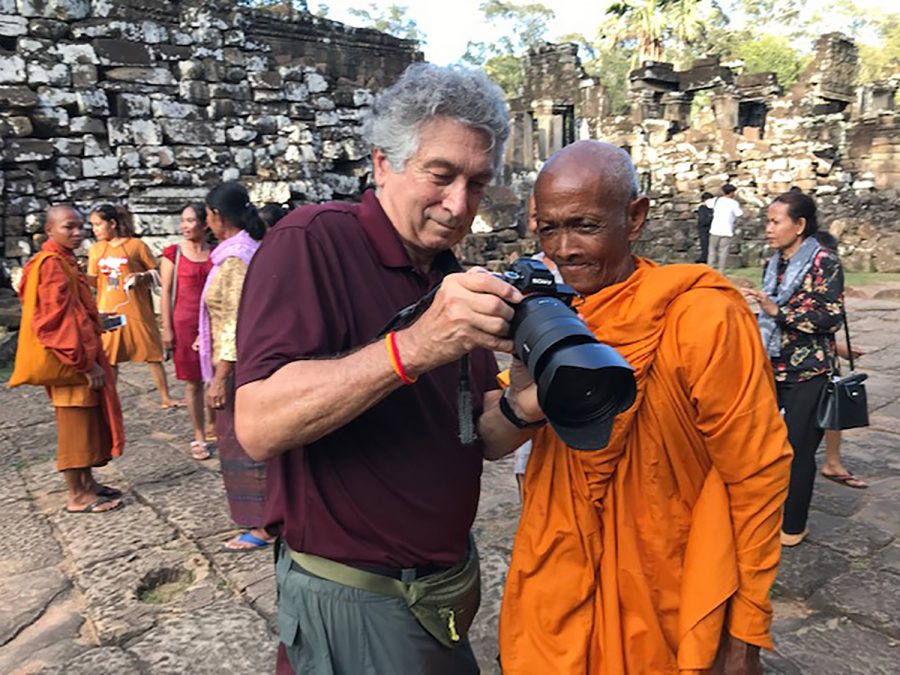 Over 40 years, St. Louis attorney Bob Denlow developed a successful eminent domain law practice as a trial lawyer. His job was to protect his clients’ properties and businesses that faced forcibly losing their properties to governments and large developers. Much of his success came from attention to details and meticulous research. That same methodical approach has served Denlow well in his second act, as a talented travel photographer.

“After practicing law for four decades and having retired from marathon running, I decided to develop new skill sets to add to my life,” said Denlow, 69. “Why photography? It brought out my creative side after a career of resolving disputes with logic, numbers and salesmanship. That’s what appealed to me.”

“Bob doesn’t just snap pics, he composes images,” Halperin said. “He thinks carefully about the entire frame, not just the central subject. He understands the cycles of light and he goes out to shoot at all times of the day to maximize the best lighting possible. He’s also a master at engaging people when doing street photography.”

Denlow’s friendly smile and disarming nature is a quality that transferred from the courtroom to strolling the streets of Calcutta with a digital camera.

“My strength was always the gift of selling a case and being fairly quick on my feet,” Denlow said. “It also helped having a good sense of humor, which I often used with a jury.”


From backpacking to building a law practice and family
Denlow is a classic second-generation success story. His parents were Holocaust survivors who primarily spoke Yiddish. They ran a tailor shop in the University City Loop. He grew up in a modest apartment near the shop, which was located on Kingsland Avenue and Delmar Boulevard. He became a bar mitzvah at Bais Abraham Congregation.

After graduating from University City High School in 1970, Denlow earned a bachelor’s degree from Northwestern University. Before heading to law school at St. louis University, he got his first taste of international travel.

“I backpacked through Africa for six months with $1,000 in my pocket,” he said. “I crossed the Sahara Desert and went to villages from the Arab world to Nigeria and Ghana. Back then, taking photos was not my interest. I did have a little pocket camera, but the film got destroyed in the sun.”

After law school, Denlow became a tenacious defendant of property owners who stood to lose large sums of money from redevelopment projects. Denlow negotiated to get his clients compensated fairly. He eventually was named the national head of the eminent domain section for the state of Missouri.

In addition to building a law practice, Denlow raised a family with his wife Pat. His son David lives in St. Louis and works with autism. His daughter Chelsea lives in San Francisco. She was an urban studies specialist and Coro fellow who worked for the Obama administration.

Denlow always had a travel bug, and the family often took trips to exotic locations. Travel combined with photography started in 2014 when he took a trip to Cambodia with Halperin. Denlow was beginning to transition out of working full-time and wanted a new challenge that would stimulate his creativity. He also sought to get the most out of life while he was physically able. That stemmed from watching his wife suffer the ravages of multiple sclerosis.


Telling stories without words
Shooting photos wasn’t an obvious choice for Denlow, who had little knowledge of cameras. Once he got started, he said, “I became obsessed with photography.”

On the plane trip to Thailand, Denlow figured out where the on-off button was on his new camera. Eventually, he learned every technical aspect of digital photography and post-production.

“I had traveled extensively before to different parts of the world, but now I had a camera in hand to capture everyday life, feelings and stories, and beautiful scenery,” he said. “In a short time, I traveled with friends and family to New Zealand, Iceland, Vietnam, Cambodia, Thailand, Cuba, Tanzania, Czech Republic, Hungary, the Netherlands, and the western United States, shooting photos everywhere I went.”

Denlow said he loves the ability to tell a story without words.

“I’m moving more towards street photography shooting people to tell a story,” he said. “The idea of a photograph is you capture a moment for others. You just freeze it in time. To me, photography is learning to see and being able to focus on the present moment. It has to do with the way you see the world around you, to freeze moments with the press of the shutter, and to tell a story with a single image.

“I photograph everyday life as well as landscape photography. During this last year with the pandemic, I have explored St. Louis and Missouri. I developed a close-knit group of photography friends. We would travel somewhere nearby every week to shoot. Like many things in life, sharing my interests with others is the most rewarding part of this adventure.”

His passion for photography also includes supporting the International Photography Hall of Fame (IPHF) and Museum in the Grand Center area. Denlow is a board member of the organization.

“The great thing about IPHF is it’s a significant photography organization that is putting St. Louis on the map, because it is basically the Cooperstown of photography and we are the city that can claim it,” he said.

Denlow has been active in other volunteer and charitable activities, too. He is a past board member of Central Reform Congregation, and he once served as head of a pro-Israel PAC in St. Louis. He brings a unique perspective to his role at the Photography Hall of Fame, according to Patty Wente, IPHF CEO and president.

“He comes up with great ideas, and it’s good to have that kind of vibrant energy on your board,” Wente said. “For example, he came up with a program for young adults with autism who can shoot photos and develop their verbal skills in the process.”

The IPHF is planning for its 2021 class of inductees on Oct. 29, and Denlow will serve as an ambassador. It’s a perfect role for him, Wente said.

He’s a connector in the St. Louis photo scene,” she said. “Bob has an insatiable appetite for learning about photography. He’s inspired by photography and there is no limit to what he will try and shoot. He stretches himself and thrives on learning new skills.”

Denlow’s quest for learning the intricacies of the craft and inquisitive nature has made him a natural photographer, said Halperin.

“Since he has thrown himself into shooting, Bob has also become knowledgeable about the history of photography,” Halperin said. “He has connected with many like-minded photo enthusiasts and his passion is truly contagious. He is a sponge for learning more and flexible enough to try different ways of shooting and developing his own vision.”

Denlow’s tips for aspiring travel photographers
For aspiring travel photographers, once you have your passport, plane ticket and camera ready to go, what’s next? Bob Denlow has captured many intimate and revealing environmental portraits in his travels. He shared some of his tips. First, be sensitive to others and don’t just stick a camera in someone’s face. Instead, start a conversation.

“Just talk to the person you want to photograph and then ask their permission,” Denlow said. “Often they will say ‘yes.’ That’s one of the advantages of having gray hair—you’re not threatening. I was downtown near the Gateway Arch and I saw a father and daughter playing in a big grass field. It was just a wonderful scene. And I walked up to them and I said to the father, ‘Hi, you have a beautiful daughter. Do you mind if I take a photo of the two of you?’ In that type of situation, 99 out of a 100 times, they’ll say yes.”

Since Denlow often shoots on the street in urban environments, he is often in areas of extreme poverty, like a village in India where people live within inches of a railroad line. His process again begins with talking first, shooting second.

“Just talk to a person one to one and be courteous, like on the railroad tracks in Calcutta where I was a year and a half ago. If you’re in a group of other photographers, the people you’re shooting will feel like animals in a zoo. That’s a lose-lose situation. They just won’t feel comfortable.

“But if you’re one on one, all of a sudden you’re approachable and it can be magical. And only part of the experience is the camera. The other part is actually talking to them and getting to know them a little better. That’s why I think international travel really opens one’s eyes.”