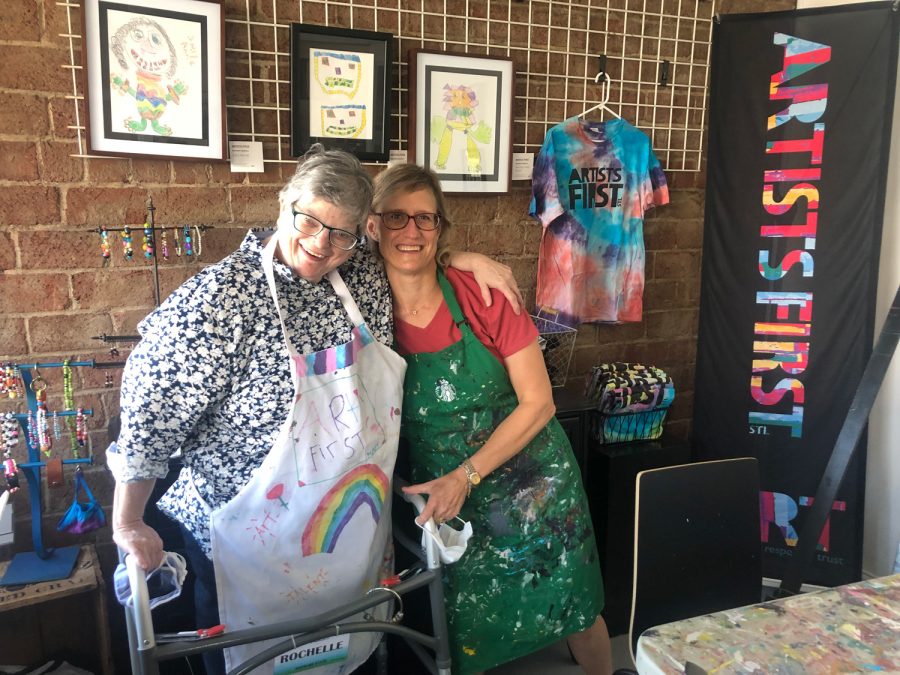 Sometimes heroes live quietly among us, not looking for recognition but choosing instead to blend in, and do what they do without any fanfare. René Zar is that kind of hero. She has spent more than 15 years fulfilling a promise to a dying friend, and in doing so is making a monumental difference in the lives of two Jewish adult siblings, one of whom has developmental challenges and both of whom have shared experiences of chronic physical and mental illness.

The story begins about 20 years ago at the former B’nai El synagogue. That’s where a thirtysomething René Roth (now René Zar) met Irene Goldman, who at the time was in her 70s and caring for her adult children, Rochelle and Steven, who have a range of special needs.

“She was this nice, sweet lady at synagogue,” recalled René, now 52, whose professional background is as an occupational therapist. “My husband and I were dating at the time and new to the congregation. The little old ladies at the synagogue loved when a new couple showed up. She and I befriended each other. We just took to each other.”

In addition to B’nai El, René would sometimes run into Irene at the grocery store — the two lived nearby. “One time I stopped by her house to visit her. That was the first time I met her son and daughter and the first time I realized how full her hands were.”

Irene lived into her early 90s but didn’t drive and was pretty much confined to the home she shared with Rochelle and Steven once she turned 80. In fact, the last nine months of her life were spent in a nursing home in Maryland Heights. She passed away in February of 2017 at the age of 92.

“For the last 12 years or so of her life, I pretty much was the primary caregiver for her son and daughter in terms of their connection beyond the walls of their home,” said René, who is married with three teenagers and now belongs to Congregation Shaare Emeth.

René eventually was given power of attorney for Rochelle, now 58, and Steven, 72.

“My goal was to help them stay in their house for as long as possible because I was really terrified about what the options were — there just weren’t many,” she explained. “They were able to stay in their home for a year. When it became the anniversary of their mom’s passing is when things got tough for them physically, mentally and emotionally. That mark in time was heavy for them.”

They wound up moving to the same nursing home where their mother, who had been beloved by the staff there, spent the end of her life. The siblings have been there for three years now, and by all accounts, it’s been extremely positive.

René, as it turns out, lives about three minutes away. She comes by several times a week to visit, bring them special treats and even pick up and drop off their laundry because, as Rochelle explains it, “my undergarments can get eaten by the washing machine.”

Rochelle and Steven “have been able to develop some independence they never had before because they were always with their mom,” said René. “They had a chance to recreate their bond as brother and sister rather than looking for attention seeking and family disruption stuff. They depend on each other.”

Of the siblings, Rochelle is more social. Steven prefers to stay in his room reading Westerns and mysteries. He also enjoys keeping up with current events.

Rochelle, on the other hand, likes to go out for lunch, especially to Panda Express. She enjoys visits to Half Price Books — Amelia Badelia books are her favorite because she says the character’s sense of humor is similar to hers. Rochelle also looks forward to making art.

When René, who dabbles in art as a hobby, was at an art fair in Queeny Park in 2019, she met Sheila Suderwalla, the executive director of Artists First, a nonprofit art studio in Maplewood that works to empower artists of all abilities.

“With Artists First, whatever art you create, there is no right or wrong. You can only compare yourself with yourself,” said René. “So I started talking to Rochelle about checking out Artists First. She had done umpteen community programs and never found a fit. They were either too high functioning or too low functioning.”

It took about six months for Rochelle to agree to accompany René to the studio, which she did in September of 2019. Since it is an integrated program, René could sit with Rochelle while she created various art projects. Rochelle enjoyed the experience so much that the two started going each week for about two hours.

Of course, once COVID-19 hit, the studio, like virtually everything else, had to shut down. But René arranged for “phone coaching” for Rochelle by an Artists First instructor while René acted as courier, bringing art supplies to Rochelle at the nursing home and taking her finished works back to the studio.

No question the pandemic was hard on Rochelle and Steven because they could only see René through the windows of the nursing home and talk to her by phone. But because they are fairly independent — they can take care of their personal needs — they were able to distance themselves from nursing home staff and other residents, which helped them stay healthy.

When it was safe to do so, Artists First reopened but required participants to make an appointment, wear masks and social distance. “We scheduled on days when we knew there were people Rochelle had become friends with going. She knows their names and they know hers,” René said.

When I met René and Rochelle at the studio a few months ago, Rochelle was excited not only to show me her current work, but also to take me to the gallery area where a dozen or so of her paintings and prints had been featured in an art show in July. She even sold several and used the proceeds as a credit to pay for studio time.

After they finished at the studio, they planned to go out to lunch — Panda Express if Rochelle got her way — and then maybe hit the half-price bookstore or do some other shopping.

“We make it an outing we both can look forward to, rather than me just taking her to doctor’s appointments,” said René. “This allows me to be out of the caretaker mode and Rochelle out of needing a caretaker — we can just be friends.”

Friends is only one of many words Rochelle uses to describe her bond with René. “She is my sister, chauffeur, friend, teacher, advisor and book pick-up person,” she said. “If I’m upset, I go to her and I’m happier. René gets a lot of my jokes.”

Steven, too, has only words of care and kindness when it comes to René. “We’ve had a lot of physical and mental issues in our lives,” he told me in a handwritten letter. “René is out guiding light. She’s helping us to survive.”

Clearly, the three get a lot out of their relationship. René said she has always felt like this is what she is supposed to be doing — being that person for Rochelle and Steven.

“I spent the last day of her life with Irene,” René recalled. “When the nurse came to roll her on her side, I climbed into bed with her to snuggle. The hospice nurse felt she was holding on because of Rochelle and Steven, but I told her that it was OK to let go, they would be OK, she didn’t have to worry about them. I promised I would be there to take care of them.”

And she has been, said Rochelle. “She is there for us and helps us with everything.”

For more information about Artists First, go to artistsfirststl.org or call 314-781-4440.