Recht tears down walls at U. City High 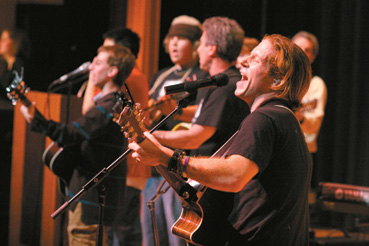 Recht tears down walls at U. City High

BY VICTORIA SIEGEL, SPECIAL TO THE JEWISH LIGHT

Not only did Rick Recht tear down the walls of bias and prejudice on Thursday, Jan. 19 at University City High School’s auditorium, he also raised the roof.

The almost-full auditorium was alive with clapping, singing, and music as people from all walks of life joined together to celebrate diversity and to honor the legacy of Dr. Martin Luther King, Jr..

Denise DeCou, St. Louis project director for the Anti-Defamation League’s A World of Difference Institute, kicked off the evening’s event with a warm welcome for the attendees. Rabbi Susan Talve with Central Reform Congregation further raised the excitement in the room by asking members of the audience if they were ready to tear down the walls of bias. She was answered with enthusiastic screams of “yes.” She also emphasized the need for togetherness in our community.

When Rick Recht came on stage with the Cote Brilliante choir, the audience was clapping along with the uplifting and rhythmic sounds of the music. This excitement continued when the Jewish Youth Choruses appeared on stage and began singing. Vocal music teacher at the Saul Mirowitz Day School – Reform Jewish Academy and choir director of Shaare Emeth’s youth choir, Jan Goldman, said that the kids participating in the concert were very excited to learn they had been asked to be involved.

“These kids have such ruach and spirit. Rick is a real rock star to them; they started screaming when I told them about the concert and going on stage to sing with Rick. And it’s thrilling for me to see them so excited and having this enthusiasm for music.” Goldman reported that around three-fourths of her music students at RJA agreed to be in the concert.

Michelle Bennett, a charming eight-year old in Goldman’s class, said when she was asked about participating, that she wanted to be in the concert because she knows about Recht from her synagogue and she likes his music. Eliana Zuckerman, nine years old, and Jordyn Miller, eight years old, echoed Bennett’s comment and added that the concert’s purpose was “to get people to think about segregation and to walk away without segregation.”

Hannah Moore, 12 years old, had originally come to the concert with her mother only because her brother was singing in their church’s choir. However, when asked at the end of the concert what she thought, she replied with enthusiasm “I really liked it. I enjoyed the musicians and the message.” Her brother Andrew said he was looking forward to “having fun, getting to know people of other faiths, and singing my heart and soul for God.”

Philip Deitch, with Jews United for Justice, was another presenter and he reminded the audience of the importance of the golden rule and emphasized how words can become thoughts that can eventually become a person’s character. Frankie Freeman, a long-time civil rights activist, warned the attendees how misinformation and attitudes can be hurtful and how they need to be changed. She added that “we may not always agree, but it’s important that we share values, converse, and get to know one another.”

Karen Aroesty, regional director, Missouri/Southern Illinois, Anti-Defamation League explained how Recht’s concerts help bring everybody together to fight bigotry, hatred, and racism. “These concerts use music to get out the message in a different way. They energize a whole different group of kids to become change agents.”

Throughout the concert, Rick Recht and his band kept the audience energized with rousing and animated music. Even traditional songs, like Let My People Go, got special treatment and became uplifting, gospel-style renditions. At the end of the show, Recht praised the singers and participants and observed that the evening was the “start of something special.”

For more information about the Tear Down The Walls teen initiative contact St. Louis Live Agency at 314-991-0909, or visit www.rickrecht.com. To contact the ADL about it’s A World of Difference Institute, call 314-432-6868.