Raznick honored for 20 years at Library 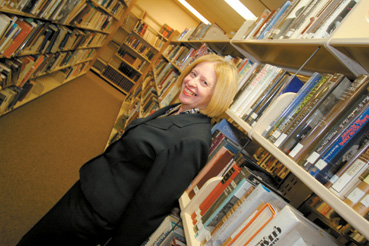 Raznick honored for 20 years at Library

Two decades of service to the community has its rewards.

Barbara Raznick will be honored early next month for 20 years at the helm of the Saul Brodsky Jewish Community Library by the organization’s board with a tribute and concert event.

“Because of her exceptional material selection, fund-raising and grant writing skills, the library has become one of the most successful and widely used Jewish community libraries in the country,” said the event’s invitation. “She has greatly increased adult programming to include book reviews, author presentations, poetry and dramatic readings and musical performances.”

Raznick, who came to the library in 1985 not long after its opening, has also co-edited two anthologies of St. Louis Jewish authors, First Harvest in 1997 and New Harvest last year. She has also earned notoriety as a storyteller both in and outside the St. Louis area. But according to Adinah Raskas, it is Raznick’s work storytelling at local schools that seems to earn the most kudos.

“That has been wonderful,” Raskas said. “Many of the schools write her notes about how wonderful her stories are. She goes out to the various schools in the community and brings Jewish stories to them and for many of these schools it’s the first time they’ve ever heard anything about Jewish literature.”

Raznick also does storytelling for children at special events at the library itself. She mused that those “storytimes” may soon be moving into a second generation of readers.

“Probably some of the kids that were at the early ones are now married and about to have children of their own,” she said.

Raznick, a congregant at United Hebrew who moved to St. Louis in 1975, began at the library in 1985 after stints with the St. Louis County Library and the Parkway School District. That wasn’t her first involvement with books however. Earlier she worked at the Omaha Public Library. Raznick said her two favorite books are Lovesong by Julius Lester and Snow in August by Pete Hamill.

She said she probably hadn’t initially expected to work in the Jewish community but she found the offer just too tempting when the opportunity came up.

“When I saw this job available, I knew it would combine my library skills as well as my Jewish background, my love of kids and storytelling, which I started to do at the St. Louis County Library,” Raznick said. “It was a perfect fit for me.”

“It has been such a pleasure working in the Jewish community, in particular with all the board members who I’ve been privileged to work with over 20 years and the other professionals in the community.”

Susan Miller, a library assistant who has worked with Raznick for the past two years, said the community has certainly appreciated the librarian’s helpful demeanor.

“I really think she provides a really unbelievably fine service because I can tell you since I’ve worked here, just about every agency, every synagogue, everybody has contacted this library at one time or another to find out something or needing something or that can just use her help as a resource,” Miller said.

Miller said that Raznick’s love of literature is obvious in the warmth she displays to patrons every day at the Brodsky Library.

“She has this great attitude,” Miller said. “She’ll always say, ‘Take the books out as long as you like. Just take the books. They’re here to be used.’ The more worn out a book is the better she likes it because the more people are using the library.”

For Raznick though, the rewards can sometimes be closer to home.

“I hope I’ve passed on my love of stories to my four granddaughters,” she said. “They also like to pretend they are storytellers.”

The event honoring Raznick will be held Thursday, Feb. 9, at 7:30 p.m. at the Kopolow Building. The cost is $10 per person. Participants will be entertained by Israeli singer Ella Zingerevich. A dessert reception will follow. A special book fund has also been set up in Raznick’s honor. Donations are appreciated. For more information, call 314-442-3720.