Rare Torah ark curtain made by Jewish-Italian artist in 1755 on display at St. Louis Art Museum 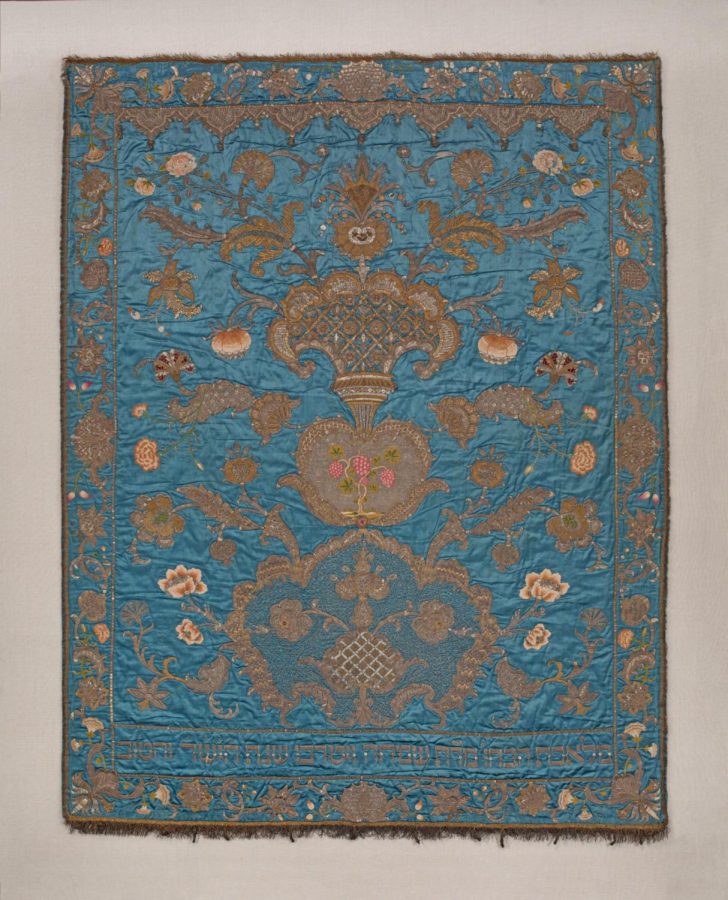 It’s important that Jews of the 21st century understand and keep alive, the spirit and importance of past Jewish community’s contributions to society, including the area of the arts. Despite persecution and exile, Jews throughout the world have always been key contributors to the arts, both as patrons and artists. The art that has survived the centuries must tell its story. Now, it’s our turn to listen.

In March, The Saint Louis Art Museum presented “Signed in Silk: Introducing a Sacred Jewish Textile,” an exhibition highlighting an extraordinary 2019 acquisition, a 1755 Torah Ark Curtain, or “Parokhet.” The free exhibition is on view in Gallery 100 through Oct. 3.

After this story was originally published in January, word has spread about the Torah Curtain, and the story it tells. This weekend, our partners at Forward published their own version, thus finding more national and international interest in this rare art, that you can see without flying out of town.
The Artist
Artist Simhah Viterbo embroidered a dedicatory inscription across the lower edge of this magnificent textile when she was only 15. The year was 1755, and Viterbor was living in the Italian port city of Ancona on the Adriatic coast. Viterbo was continuing in a long tradition of Italian Jewish women who created sumptuous textiles for their synagogues.

“According to an 1818 text by her son, Rabbi Yechiel Hayim Viterbo, she was reknowned for her embroidery,” said Genevieve Cortinovis, the museum’s Andrew W. Mellon Foundation Assistant Curator of Decorative Arts and Design. “Although she only lived to 40 years old, these synagogue textiles were made when she was still a teenager, and so she likely created many more in her lifetime.”

Viterbo created an object that reflected not only her Jewish heritage but also her own place and time, at the center of a major trading crossroads during an era of increasing cultural connectivity. In the 18th century, Ancona was a bustling port, home to many, including a prosperous and cosmopolitan community of Jewish traders.

It was also a Papal State that since 1555 systematically had oppressed the Jewish residents, most of whom were forced into a few low-skill trades, and isolated them in ghettos, the term then used for prison neighborhoods. Paradoxically, this segregation of culturally diverse Jewish communities coincided with a flowering of Jewish ceremonial art, and this Torah Ark Curtain exemplifies the lavish sacred textiles made by Italian Jews during this period.
The History
This paroket’s journey from Ancona to St. Louis is interesting. The curtain has been auctioned publically three times since 1985, first in Israel, Switzerland, and the United States. It was exhibited at major museums in Israel and France. Most recently it was on long-term loan to the Israel Museum in Jerusalem where it was included in a 2015 exhibition.

“We are in contact with curators at the Jewish Museums of Venice, Rome, and Florence, and the Jewish Community of Ancona,” said Cortinovis. “And have utilized records in the Central Archives for the History of the Jewish People in Jerusalem in an attempt to build the curtain’s early history.”

The St. Louis Art Musuem purchased the curtain at auction in 2018, with a dedicated Judaica fund established by Deane and Paul Shatz who wanted to connect St. Louisans with remarkable Jewish ritual artworks, of which this is certainly one. The museum had previously used the fund to purchase a set of 18th-century Dutch Torah finials.

“We felt the curtain was exceptionally beautiful, demonstrating a dizzying variety of embroidery and applique techniques and materials and a range of mid-18th century European and Ottoman decorative styles,” said Cortinovis. “Although Viterbo’s identity had not yet been established when we purchased the curtain, we had a good jumping off point for further research. Utilizing CAHJP records, we were able to confirm her place of birth and life dates, and build her family tree. It is one of a handful of 18th-century European works of art signed by a woman in our collection.”
The Exhibit
Rare Hebrew books, printed in Venice and borrowed from Washington University’s Shimeon Brisman Collection, join with splendid examples of Italian, Greek, Ottoman, and Indian textiles to make “Signed in Silk” a celebration of Viterbo’s skill in having synthesized a range of decorative motifs, techniques and forms.

The exhibition explores how influences from Baroque garden design, Christian ecclesiastical embroidery, botanical naturalism, Ottoman prayer rugs, and Renaissance pattern books coalesced in the handwork of a young woman confined to a ghetto. Viterbo’s accomplished work nevertheless reveals her connection—through textiles—to networks of trade from London to the Levant.