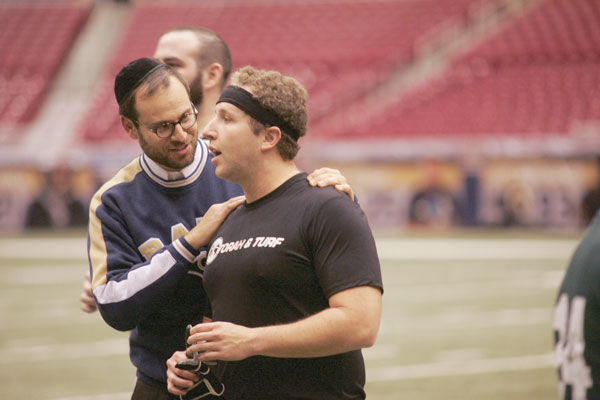 Connecting Torah to football is not a new concept for Rabbi Shaya Mintz, of the St. Louis Kollel, which sponsors a flag football program.

So when the NFL announced earlier this month that owners had approved the Rams’ relocation to Los Angeles, Mintz referred to the Mishnah, a book of Jewish law.

“The Mishnah tells us develop an ‘Eyin Tova’ iterally translated a ‘good eye,’ ” Mintz posted on Facebook. “My rabbi in Israel explained this to me to mean [to] look at people, situations and occurrences that happen to you and around you in a positive way. Putting all my emotions aside, I am going to choose to focus on the generosity of the Rams.”

The Rams had sponsored Torah and Turf, a six-on-six flag football league where players do a half-hour of textual study before games. Each year, the league had its championship game on the field at the Edwards Jones Dome.

Mintz’s post was notable not only because he brought religion into the conversation but also because the rest of St. Louis was furious at Rams owner and leaders of the Rams and NFL. Despite the fact that the Torah and Turf league must now adjust for the loss of its signature of event — the game at the stadium— Mintz said he was disappointed but not angry.

Other fans, however, were upset not only because the team’s owner, Stan Kroenke, moved the team to California — where they had left just 20 years earlier — but also because he criticized the city in his relocation proposal to the league.

The city “lags, and will continue to lag, far behind in the economic drivers that are necessary for sustained success of an NFL franchise,” Kroenke stated, according to the St. Louis Post Dispatch.

But Mintz said that the team’s chief operating officer, Kevin Demoff, who is Jewish, had offered “a real lesson in menschlichkeit, in what it means to be a mensch,” by providing the league with the opportunity to play the game at the dome, a tour of the Rams’ practice facility in Earth City, and two free suites for the 60 players in the league, along with friends and family, at a preseason game.

“Even though we were a small organization, he didn’t make us feel that way at all. He would respond to our emails. He would pick up our phone calls,” said Mintz, who has organized the league for nine years. “He was very proud that he was able to use sports for something that was more meaningful.”

Still, the league had only had a relationship with the team for the last three years, and prior to that, Mintz said, “we still ran a very successful league.”

He said he will look into whether the league may still be able to use the dome or the Rams’ former practice facility for games, but plans for those facilities are undetermined.

Still Mintz is not hinging the success of the league on whether they can still play at the dome. Before the Rams left, Mintz had already been in contact with Jews in other cities about starting similar leagues.

People in Chicago, Cincinnati and Denver have committed, and Mintz is in talks with seven other cities. The ultimate goal is to have playoffs and a national championship.

He hopes that the larger scale will provide a new incentive for players to join, the way the game at the dome had.

“We believe that once it becomes a national program,” Mintz said.

“More players will want to be involved.”