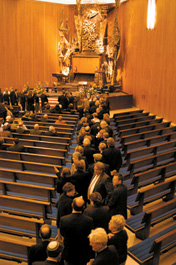 With every bench of the sanctuary filled and a line of mourners standing in the aisle, waiting for a chance to say final words beside the coffin, the St. Louis community said farewell on April 3 to Rabbi Alvan D. Rubin — who was the rabbi emeritus of Temple Israel and passed away at the age of 85 on Friday, March 31, after a short illness — at a memorial ceremony held at the temple.

Members of Rubin’s family stood and spoke kind words of a man they said was always accepting, and always a role model to them.

Alvan Rubin began serving the St. Louis community in 1967, as senior rabbi of Temple Israel. In 1987, he became rabbi emeritus.

“As all rabbi’s children must do I learned to accept the fact that along with this title came the realization that I shared him with many, many people,” she said. “This attendance today serves as a testament to the fact that when one met him, one had a friend for life.”

Carol Rubin spoke about her father as a giving man, and said that quality he posessed was passed on to her and her siblings.

“David gives of himself as an emergency room physician in the Bronx to those who can’t afford treatment, Amy inspires students at Newark Academy in New Jersey to respect and understand ancient and modern cultures and find pride in their own gifts they have to offer the world, and I do what I can as the assistant head of the school at our Reform day school to connect with each child, to rejoice in our Jewish heritage and to discover a passion for learning.”

David Rubin, Alvan Rubin’s son, said it was not easy being an “RK — a rabbi’s kid,” but that he came to realize perhaps it doesn’t matter what one’s father does, “it’s the message he’s trying to send you from his world of experience.”

Amy Rubin said her father taught her the most important lesson in life, “that each person deserves respect, honor, and deserves the right to live with dignity.”

Rabbi Mark L. Shook of Temple Israel, said Rubin had “a much larger family than just occupies these first few rows,” and said “and so many of you directly can make the claim that either Alvan was your best friend, or you were Alvan’s best friend.”

Following the ceremony, Barry Rosenberg, executive vice president of the Jewish Federation of St. Louis, said, “Rabbi Rubin played a prominent leadership role in local and national Jewish affairs. We are proud that among his many leadership positions, he served twice on the Federation Board of Directors. He was a strong supporter, a constant partner and a good friend of Federation. His enormous legacy is evident in the esteem of his congregants, the stature of those he mentored and the commitment to Jewish life, demonstated by his children and grandchildren.”

Rubin is survived by his wife, Ruth Ann Rubin, his children, Dr. David H. Rubin, Amy Rubin Schottland and Carol Rubin; by a brother, Chester A. Rubin, and by eight grandchildren.

Rubin’s family asked that any memorial contributions be made to the Rabbi Rubin Endowed Rabbinical Chair Fund at Congregation Temple Israel.