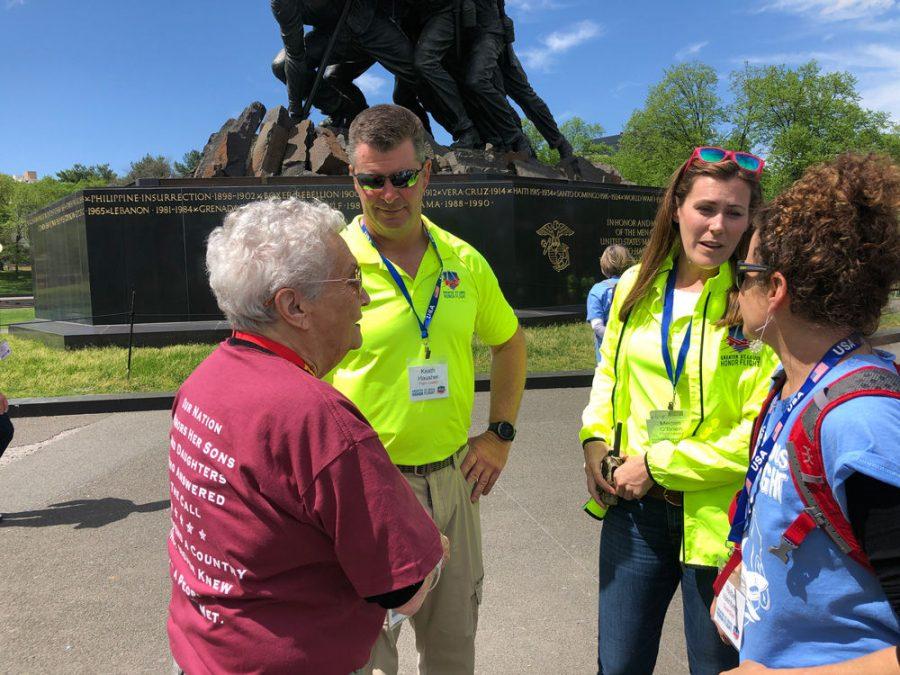 On April 20, Helyn Kevrick, a Marine veteran, traveled from St. Louis to Washington, D.C., in a familiar setting: She was the only woman among 22 veterans.

When she joined the Marines in 1953, she and another enlistee were the first two women to go through drill instructor school with men, Kevrick said.

Between then and now, the number of women in the Marines has remained small. According to a report from the Marine Corps Force Innovation Office, women today make up less than 8 percent of enlisted Marines.

Despite the gender-related challenges she faced, Kevrick, who is Jewish, persisted in her service and remains a strong patriot.

Her trip to Washington was made possible by Honor Flight, a nonprofit group that provides veterans with free travel to visit the memorials to the wars in which they served. The organization was founded in 2005. In 2017, it provided travel for more than 20,000 veterans, the group says.

As they toured the various monuments in Washington, people approached Kevrick, who was wearing an Honor Flight T-shirt and camouflage pants, and expressed their appreciation for her work.

“Kids would come up and say, ‘Thank you for your service,’ ” said Kevrick, a member of Congregation Shaare Emeth. “People were so grateful, and it made you feel proud for having been able to serve in the military, and it also made you so proud to be an American.”

Kevrick became interested in serving in the military because of an uncle who served in the Coast Guard during World War II. He would visit her dressed in his uniform.

“All the girls, including myself, fell in love with him,” she said.

Kevrick graduated from high school in St. Louis around the start of the Korean War and wanted to follow her uncle into the Coast Guard. But that branch was not yet accepting women.

Then she saw a poster for the Marines, which advertised it needed “a few good men.”

The Corps also was accepting women.

But she weighed only 90 pounds, and the Marines required that at her height of 5-feet-4, she had to weigh at least 105 pounds.

In the three days before her physical, Kevrick recalled, she “ate everything as heavy as I could think of. Malts, bananas, water and in the morning, I waddled in to take my physical, and I weighed in close to 100, so they put down 105.”

On the bus to boot camp in Parris Island, S.C., she and other enlistees were “all laughing and talking, and then the bus stops and we are still yakking, and all of a sudden there is a woman there who yells, ‘Quiet, privates!’ and I thought, ‘Oh, this is for real,’ ” she said. “We got our uniforms, and everything about life changed.”

Kevrick said women were being accepted to fill positions left open by men, who were now overseas. The men who remained mostly treated her fairly, she said. On marches, she would carry the company flag in the front of the pack and had to almost run to stay in front of the men, who had longer strides.

“It was a challenge because since we were the first two women, I think they weren’t really ready for the women,” Kevrick said. “We had to learn everything the men had to learn, which had nothing to do with us, such as where they marked their underwear, and we had to learn the M1 rifle that was being used at the time.”

She also faced questions about her religion from other Marines, many of whom had never met a Jew.

“It sounds stupid now, but one said, ‘I thought Jews had horns? Because of that picture of Moses [A Michaelangelo sculpture in Rome depicts Moses with horns].’ One asked, ‘You can’t eat what we can eat?’ ” Kevrick said.

As a drill instructor for women in the Marines, Kevrick said she was strict.

“I had to make sure that they followed the rules and that they got to all the classes, behaved when they were there, got them back to the barracks,” Kevrick said.

She corresponded with her uncle, who had been wounded in World War II and was now in civilian life. He told her he was proud of her service.

After three years, Kevrick left active duty and entered the reserves. She met her husband on a blind date and later had three girls and one boy. She encouraged them to participate in high school Reserve Officers’ Training Corps (ROTC) programs, but none of them followed her into military service.

Kevrick’s daughter Rebel Vaenberg heard about the Honor Flight program and decided to sign up her mom. The two of them flew to Baltimore. The Southwest Airlines pilot recognized the 22 Honor Flight veterans who were on board and, once they landed, firefighters shot off two water cannons over the plane in tribute to the veterans.

“It was thrilling,” Kevrick said. “How do you describe something like that?”

Vaenberg said: “You can only describe it as sheer patriotism.”

When they got off the plane, there were hundreds of military personnel and civilians waiting for them. Kevrick had been somewhat reluctant to receive the honor among the other veterans, many of whom had been in combat.

“But when we got to Baltimore, there were several women who came up to me and said, ‘We want to thank you for your service and thank you for setting the path for us,’ ” she said. “And that made me feel better, that maybe I did belong on this.”

They traveled by bus to Washington to visit the World War II, Korean War and Vietnam War memorials, among other sites.

As a surprise for Kevrick, family, friends and rabbis from Shaare Emeth had written letters expressing their thanks. On the plane home, airline staff had a “mail call,” tossing the letters at them and saying, “air mail.”

“It was something I’ll never forget for the rest of my life,” Kevrick said. “Every veteran should go on this flight.”