Philanthropist’s gifts are more than money 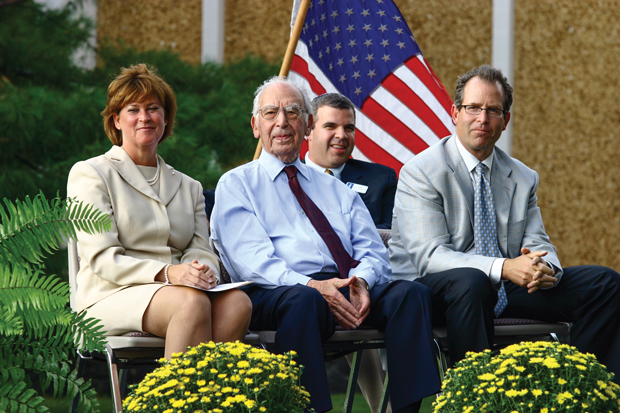 In a 2007 file photo, Michael Staenberg (right) is shown with (from left) Jewish Community Center CEO Lynn Wittels, I.E. Millstone and Rabbi Brad Horwitz at a groundbreaking event for what would become the J’s Staenberg Family Complex. Photo: Mike Sherwin

Ask the president and CEO of the Jewish Federation of St. Louis about Michael Staenberg’s most valuable contribution to his agency, and the first answer Andrew Rehfeld gives doesn’t mention the philanthropist’s help with the $3.5 million renovation of the Kopolow Building. It doesn’t mention the tens of thousands of dollars in Anything Grants from Staenberg’s Family Foundation, or even the more than half million dollars Staenberg contributes to the umbrella agency every year as its largest single donor.

In fact, it doesn’t mention money at all. For Rehfeld, Staenberg’s biggest contribution is simple.

“[It is] the advice to me personally, his coaching, his support and advice to our facilities and his inspiration,” he said. “That doesn’t even include the dollars that he gives.”

That’s high praise given that those dollars from Michael and Carol Staenberg are substantial. From work to build the multimillion dollar Jewish Community Center structure in Creve Coeur that bears the family name to the assistance of the Staenberg Family Foundation with renovations at the St. Louis Holocaust Museum, the real estate developer has turned cash into a driving force behind so much of the what the Jewish community has accomplished in recent years.

But talk to almost anyone who has been on the receiving end of the largesse and they often talk about connections more than capital, foresight more than finance, acumen more than allocations. When dealing with Staenberg, it’s expertise, involvement, efficiency and ideas that help as much as any donation.

“It’s not just financial support,” said Lynn Wittels, president and chief executive officer at the J. “That’s really important, but it is also sharing his vision and driving for operational excel lence. I think that speaks volumes for the impact that one person can have.”

The impact Staenberg had at the J was immense, and the organization is thriving not just because of the new $23 million facility that helped revitalize it in 2009, but due also to a change in culture and a reorganization and rebranding that brought in new families and allowed the agency to reassume a central role in community life.

“I think it can be applied to everything,” Staenberg said of the J’s business model. “Synagogues — any organization. Everyone has good intentions. It is time to stop talking. It’s time to do it.”

And bringing good intentions to action is more than just writing checks. Staenberg often becomes intimately involved in the institutions his family donates to, helping to find innovative ways to bolster their operations.

“He thinks further than you do for yourself,” said Rabbi Tzvi Freedman, executive director of Torah Prep School of St. Louis.

When the girls’ division of Freedman’s school needed help for a refurbishment, Staenberg stepped in not just to donate substantial sums of money but also to bring in experts to improve the design of the building. Moreover, he helped to vastly increase the insurance settlement the institution received for hail damage to the roof.

He’s shown creative thinking in other areas as well, helping to secure millions in tax credits for Covenant Place’s building program. When Chabad was remodeling its facility on Olive Boulevard, Staenberg not only assisted in the project but surprised the organization by purchasing the building next door to use for parking.

At Central Reform Congregation, he’s been helping with the temple’s lighting revamp by connecting it to credits from Ameren for using LEDs. The synagogue is working with him to investigate the installation of solar panels as well, which might involve a tax credit and lower electric bills.

A few years ago, he helped it to get the nearby NextDor House up and running to encourage young adult involvement.

“He was very helpful in giving money and, being in real estate, he has so many great contacts that he was very instrumental in helping us rehab the place,” Wendy Bell, CRC’s director of finance, said of the NextDor effort.

At the Federation, his assistance in the renovation of the lobby didn’t just mean money. He also helped the agency save dollars with better HVAC and energy efficient systems. Energy efficiency was also a key part of the new J complex.

Rehfeld estimates that the expertise and connections Staenberg provides is easily worth the amount he gives in cash.

Staenberg agrees that being in real estate does indeed add to his capabilities.

“We’re able to acquire things,” he said. “We’re also developers, so we know how to do things ourselves, bring in the right consultants, hire the right architects, engineers, contractors, and be able to negotiate and understand what we need to do.”

Torah Prep’s Freedman sums up the formula for success common to most of the philanthropist’s involvement:

“He becomes a friend. He does more than you ask. And he’s there to improve you for the future.”

Murray Bresler of University City, a longtime friend of Michael and Carol Staenberg, said that the pair remain connected to those things they embrace, ensuring that a cause means ongoing involvement, not simply a one-time donation.

“They don’t just put their money into it,” he said. “They put themselves into it.”

Part of that means persuading others to put themselves into it.

“One thing that is really important to Michael is that he often leverages his gift to inspire others to give,” Mindee Fredman, the Federation’s director of foundations, said in an email.

Fredman cited the Anything Grants program as a prime example. Now in its fourth year, the initiative provides stipends of up to $5,000 for infrastructure or other needs for a group as long as the organization raises a matching amount to fund the other half of the project.

Staenberg said, “Look at the things you can accomplish with a new computer system, a new phone system, new HVAC, fixing a bathroom. Nobody has to write the million dollar check.”

Still, Staenberg is helping the Federation grapple with a growing issue in local fundraising efforts. Rehfeld says the local Jewish community is working to broaden its aging donor base.

“We have, in the last two years, grown significantly the number and the dollars of baby boomers and of Gen Xers,  but it is the folks who are older than the baby boom that is now hitting (age) 70 that make up a significant portion of our giving and our large gifts,” Rehfeld said.

Staenberg said he feels tomorrow’s challenges will require spreading the load on a lot of different shoulders.

“We need to get more people involved,” he said. “We need to make this a community effort. Not [just] one person can move the needle.”

In the meantime, Staenberg continues his own three-prong  approach to every issue: doing, giving and finding opportunities for savings.

“I think the biggest obstacle is that there is too much talk and not enough doing,” he said.